LAPD trying to put the brakes on illegal street racing 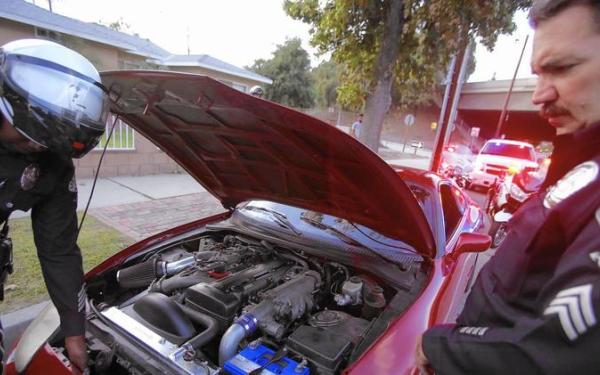 The sporty little car with the red paint and racing stickers was caught.

Parked beside a Granada Hills road and its handcuffed driver, the Toyota Supra sat with its big modified exhaust hanging just above the ground, like a dog with its tail between its legs.

"Remember me?" Officer Will Durr said to the driver — an embarrassed college student he'd pulled over days before in the same illegally modified car.

Durr grinned as he stood beneath the car's popped hood, ogling the turbo-charged engine, shining his flashlight over the modified air intake that allowed the vehicle to breathe in more power-giving air.

Like the other officers in the Los Angeles Police Department's Aggressive Driving Detail, Durr is trying to put the brakes on illegal street racing, one vehicle code violation at a time.

The driver swore he didn't race. So did his brother, sitting in the passenger seat with both hands on the dashboard.

"It's not like we're bad kids," the brother said sheepishly. "Besides, I drive a Prius!"

Durr ticketed the driver and threatened to impound the car if he saw it again. As the young man drove off, Durr laughed at having been recognized.

"We're getting pretty famous out here, the Aggressive Driving Detail," he said before hopping on his motorcycle to look for more potential racers.

From "Rebel Without a Cause" to the "The Fast and the Furious" films, illegal street racing is woven into Southern California's DNA — in movies and in real life.

It's a subculture that approaches the tribal: insular, with its own coded language, distrustful of outsiders.

"You feel the adrenaline pumping in your body. It's like getting on a roller coaster," said Dave Vazquez, 34, who started racing as a teen before giving it up because he didn't want to lose his car to police or get into a bad wreck.

In February, two spectators were killed during a race in Chatsworth, when a Mustang spun out and plowed into the crowd. In March, a driver died in Gardena. Last month, a man racing his brother died after he lost control of his Mitsubishi GT 3000 and crashed into another car in San Bernardino.

After the Chatsworth crash — which drew attention after dozens of spectators scattered, leaving the dead and the wreckage behind — people on the tightknit racing scene became even more suspicious of strangers, whom some thought might be undercover cops. For many of the drivers, even talking about the scene is taboo.

"It's dry snitching," said one man at a recent illegal race. "If I get caught, I'll get beat up."

On a recent night, a Corvette and an Audi lined up on a deserted street in Southeast L.A. A man in a black shirt with a racing logo stood between them. He lowered his arms, sending the cars screeching forward. The air filled with the smell of fuel and burnt tires.

Minutes before a police helicopter lighted up the scene like a UFO, the cars blazed past a maker of pool products, an office furniture factory — and the Entenmann-Rovin Co.

The unit has made more than 70 arrests for reckless driving and street racing and handed out more than 900 citations for illegally modified vehicles, said Sgt. Greg Fuqua, who leads the unit.

"They know we're out here," Fuqua said. "We tell them, 'Let us inspect your car or you'll go to jail and we'll still inspect your car.'" Fuqua said that sometimes drivers will beg for speeding tickets, trying to avoid vehicle inspections out of fear that they'll lose their cars.

Authorities do not keep track of deaths and accidents related to street racing. But last month, dozens of law enforcement officials met in the Valley to discuss what they called a growing epidemic, agreeing to create a multi-agency task force to combat the activity. They talked about pushing legislation that would stiffen penalties for illegal car modifications — and about struggling to keep up with people who have become adept at using social media to stay ahead of law enforcement when setting up races.

"They jump on any one of their social media sites, only to move the problem to one of our partnering jurisdictions," said LAPD Capt. John McMahon.

On a recent night, Yungster323 — a private Instagram account followed by racers — put up a cryptic post: There would be a meet on Tuesday night. Send a private message to the account to get the location.

Someone at that spot — a Bellflower Stater Bros.— would announce the location for a race. In the parking lot, empty cans of Modelo and Corona bottles sat near the gathered Camaros, Mustangs, Dodge Neons and trucks. The smell of marijuana hung in the air.

"This is boring," a 21-year-old in a white Nissan 370Z complained. He'd been coming to the Tuesday night meets for a while, but he was impatient, itching to start the race. "I'd rather be sleeping."

Many of the people gathered in the lot knew one another — or were at least familiar with the cars they'd raced against at previous meets. They joked and spouted an endless stream of car knowledge that would make mechanics envious.

Some were there to race. Some to socialize. A few were trying to make money.

One race can provide the winner with $500, said the passenger in the 370Z. He'd spent weeks living off race earnings.

At midnight, a man in a black Street Cartel racing shirt called out on a megaphone for everyone to gather around. About 60 people abandoned their cars and stood around him as he laid the ground rules: Don't post the racing spots on Instagram. Follow cars with the SC label to get to the right location.

When a 25-year-old Camaro driver who gave his name only as Jonny reached the location on Ana Street, he parked away from the starting point in case police showed up and blocked a getaway.

The races were occasionally interrupted by trucks trying to pull into a freight shipping dock on the industrial street — one of which was almost clipped by one of the racing cars.

A woman argued with her boyfriend after he left his car unlocked. He ignored her, more concerned with being able to quickly escape police than having his car stolen.

She begged him to let her in the car when he raced. Across the street, a man cradled a baby boy in his arms as the cars sped by.

"It's a family affair," Jonny cracked.

Just before 1 a.m., the onlookers took off for their cars amid shouts: "Cops!"

In Carson, Jonny lost a race to a friend before the flashing lights of another police cruiser sent everyone scurrying to a third location about 20 minutes later.

Then it was off to Malt Avenue, an industrial street in Commerce. Few cars made it there, with police cars a few streets over scaring many of the racers and spectators away. A few people sat on hoods and watched the races. Soon, everyone left for the final regroup of the night, in the parking lot of a nearby Home Depot.

It was 2:22 a.m., and there were only about five cars. Some of the drivers yawned. Minutes later, the cars began to leave, the drivers revving their engines in a growl of farewell. The final Instagram post of the night came shortly after: "Thanks to everyone that came out and supported my race meet. Hope you guys had fun see you at the next one and have a safe trip home everyone."

For Jonny, who declined to give his full name out of concern for becoming a target of police, racing was just part of his life. Even when he wasn't participating in organized races, he was racing. One night on the 710 Freeway, he pulled even with a Corvette Grand Sport he'd been stalking for a while. The drivers honked their horns, the third time signaling, "Go." The cars blasted down the mostly deserted freeway in the early-morning darkness in an L.A. version of warp speed.