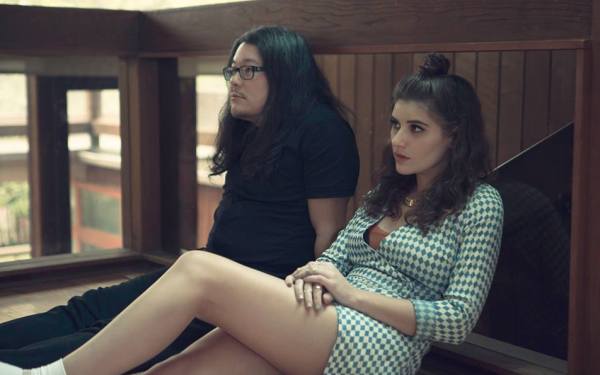 Anyone eager to see Best Coast over the last few months would have done well to look somewhere small.

In February, days after revealing that it had completed an album, the Los Angeles-based guitar-pop band played at a number of cozy spots around Southern California, including the Echo in Echo Park and Pappy & Harriet’s near Joshua Tree. A few weeks later, Best Coast traveled to Austin, Texas, for the annual South by Southwest festival, where the group knocked out nine cramped gigs in seven days.

The goal for these performances, known as underplays, was to build excitement ahead of “California Nights,” the band’s first major-label record after a string of indie efforts. But the shows were also demonstrating that Best Coast — which at its core pairs frontwoman Bethany Cosentino, 28, with guitarist Bobb Bruno, 42 — had outgrown the rooms it used to call home.

“I remember playing the Echo in 2009, just me and Bobb and a MiniDisc as our drummer,” Cosentino recalled recently. Returning to the packed club, now with a muscular five-piece lineup, “was, like, mind blown into infinity.”

Last week Best Coast did a final underplay to mark the release of “California Nights,” which came out last week and quickly vaulted toward the upper reaches of the iTunes chart. This time, though, the venue wasn’t some hole in the wall — it was the roof of the Capitol Records building in the heart of Hollywood.

Surrounded by cameras, including one mounted on a drone and another live-streaming the performance online, Best Coast blazed through a set of fresh material for an audience of around two dozen people, most of them close to the group personally or professionally. (Harvest Records, the band’s label, is a subsidiary of Capitol.) The high point, which Cosentino and Bruno had carefully planned, came when they hit the dreamy title track just as the sun dipped behind the hills that form a kind of psychic landscape in Best Coast’s music.

“California nights make me feel so happy I could die,” Cosentino sang, and you had no trouble believing her. But then came a bit of pragmatism: “I never wanna get so high that I can’t come back down to real life.”

On top of it all but somehow grounded — that’s Best Coast’s position on “California Nights,” which is poised to expand this band’s audience even as it strengthens the bond Cosentino shares with her most devoted fans. The album, Best Coast’s third, has the catchy choruses and vivid production required to compete in the big tent of pop radio; the title track has been streamed nearly 2 million times on YouTube and Spotify. Yet the lyrics grapple with personal themes — romance, disillusionment, the struggle to grow up — in lifelike terms that give the music intimacy.

“Beth is someone that everyone wants to be friends with,” said Nate Auerbach, who oversees music strategy at the popular blogging platform Tumblr. Last month Auerbach organized a Best Coast concert in Palm Springs as part of Tumblr’s IRL (that is, “In Real Life”) series, and he said fans can “really relate to what Beth writes about and to how she is on social media. She’s just herself, and so they see her and they’re like, ‘Yes! I can identify with that.’”

Growing up in La Crescenta, Calif., in the pre-Instagram era, Cosentino didn’t communicate with her idols the way she does with Best Coast’s fans on the Internet. But the intensity with which she felt their music inspired her to start singing and playing guitar, skills she eventually put to use in the arty underground band Pocahaunted. Through that group Cosentino met Bruno, an established figure on L.A.’s indie-music scene, and before long they formed Best Coast based on their mutual love of the Beach Boys and ‘60s girl groups.

The duo won widespread praise for its 2010 debut, “Crazy for You,” which wrapped winsome melodic hooks in layers of guitar fuzz. With its follow-up, 2012’s “The Only Place,” the band set out to emphasize Cosentino’s vocals, dialing down the noise and incorporating more acoustic textures with help from producer Jon Brion, known for his work with Fiona Apple and Aimee Mann. The resulting album sounds great, with echoes of Fleetwood Mac and Patsy Cline. But three years later, Cosentino has mixed feelings about it.

“I was in such a strange headspace while making that record,” she recalled several days before the Capitol gig. Sitting at the dining table in her comfortable Eagle Rock home, her cat Snacks curled up on the chair next to her, Cosentino said she’d written the songs in a rush to maintain the band’s momentum.

“We got home from touring ‘Crazy for You’ for almost two years and it was literally like, ‘You’re going in the studio in a week,’” she said. “The songs aren’t as strong as they could’ve been.”

For “California Nights” the singer was determined to provide space for the everyday existence she writes about so effectively — both in her songs and on Twitter, where she dispenses her thoughts on music, shopping and reality television with appealing candor. “I was just reconnecting with everything I’d forgotten about because I was living the tour life,” she said.

At home for an extended period for the first time in years, she also found herself thinking about California, long a focal point in Best Coast’s music, in a new way. “It wasn’t like it was before, where I’d be like, ‘The ocean! The waves! The palm trees!’” she said. Instead, she was drawn to the mistrust and cynicism at work in a town so deeply reliant on image.

“The music is very poppy and sunny, which is what everybody sees L.A. as,” she said. “But underneath it’s a little grittier and darker.” Indeed, “California Nights” — with a cover portrait shot at the same Silver Lake residence that appeared in Bret Easton Ellis’ classic of West Coast misanthropy, “Less Than Zero” — strikes an impressive balance between pretty and ugly, as in the blissed-out “Heaven Sent,” which climaxes with 30 seconds of grinding distortion.

Recorded with producer Wally Gagel, who Bruno said encouraged the band to experiment with its arrangements, the album at times recalls “Celebrity Skin,” Hole’s 1998 ode to the poisoned grandeur of Hollywood. Cosentino agreed with the comparison, saying “Celebrity Skin” was a “huge influence” on “California Nights.” Even more than its musical ideas, though, the singer said she admired how that album openly embraced the desire to be heard.

“It’s about taking a band with a specific sound and making it more...,” she said, trailing off as she searched for the right word. “I hate to say this, but a little bit more commercial.” Asked why she hated that word, she laughed. “I guess I don’t hate to say that. Honestly, when I listen to this record, I hear a lot of songs where I’m like, ‘This could be a radio hit.’ And what’s wrong with that? I know there’s a lot of people who’ll say, ‘Oh, they’re not an indie band anymore.’ But I never felt like an indie band — I just felt like a band.”

Even so, Cosentino acknowledged she had reservations about signing to a major label. “All I’d ever known of them is what I’d seen on ‘Behind the Music,’” she said, referring to the VH1 series famous for its tales of sensitive artists and unyielding executives. Yet she also knew that if Best Coast was to reach a wider audience — let alone score a real-deal radio hit — she’d need help at a moment when listeners are more inundated with music than ever before.

In L.A.-based Harvest, which recently has put out records by TV on the Radio and Banks, Cosentino said she found a company that privileges artists but has the corporate wherewithal to make big things happen. “Basically, there’s a person I can go to to request a drone,” she said.

Which doesn’t mean someone else can do all the work for her. Family-and-friends shows over with for now, Best Coast will spend the summer on the road trying to grow its following the old-fashioned way. And though Cosentino is beloved for her accessibility online, she said she’s still learning how to navigate in-person interactions with her younger fans.

“They’re growing up in the Internet age, so there’s not a lot of boundaries,” the singer said. “After a show, they’ll say, ‘Why can’t you just stop and take a selfie with me?’ And I’m like, ‘I will, but if you ask to take 900, I’m eventually going to leave.’

“I mean, I’m human. Sometimes I need to get on the bus and put on my pajamas and decompress.”