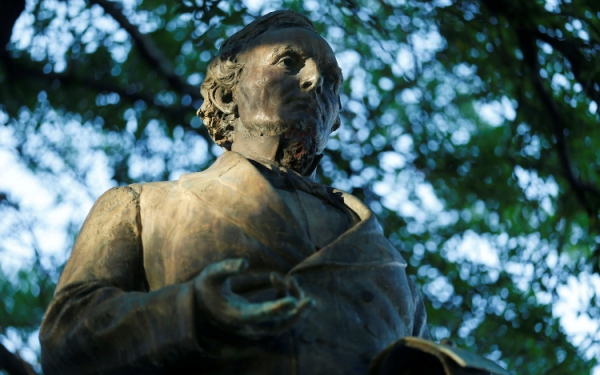 The statue of Jefferson Davis, former president of the Confederate States during the United States Civil War, stands on the campus of the University of Texas at Austin.
(Credit: Andy Jacobsohn/Dallas Morning News/TNS)

Many students rush by without a second look, but for years the tributes have marked an emotional split between critics who see them as commemorating slavery and defenders who want a key part of Texas history preserved.

Lately, the clash has gotten louder. Red spray paint was splashed last month across the near-century-old Jefferson Davis statue near the famous UT Tower. “Davis must fall,” it said of the Confederacy president.

In March, UT’s student government voted to seek the removal of the Davis sculpture, one of seven statues that line the main mall on campus.

That requires the approval of the administration, which has said further action probably will be up to incoming President Gregory Fenves. But the dispute has landed UT in the national discussion of racial issues on university campuses.

“A statue in its intrinsic nature is meant to commemorate a historical figure and represent the ideals and values that the person stood for,” said Rohit Mandalapu, student body vice president and a sponsor of the anti-Davis effort.

“He fought vociferously for maintaining the system of slavery, and we don’t think that it should be part of the campus climate.”

Others say that getting rid of the sculpture would be an overreaction and that it should be viewed as a monument honoring the sacrifice of soldiers and their families.

Banishing the statue would be a “massive insult” to freedom of expression and Southern heritage, said Jones, who played Cooter on the TV series, “The Dukes of Hazzard.”

The student vote comes amid increased national attention on race relations, a dynamic caused in part by police shootings of black men in Missouri and South Carolina, the death of a black man in Baltimore from injuries suffered while in police custody, and a video of fraternity members at the University of Oklahoma singing racist chants.

Also this year, at the University of Mississippi, a student was accused of hanging a noose around a statue of James Meredith, the school’s first black student.

UT’s school newspaper, The Daily Texan, then wrote an editorial questioning whether statues of civil rights leaders, such as former U.S. Rep. Barbara Jordan and the Rev. Martin Luther King Jr., can coexist with those of Confederate heroes at UT.

The Jordan and King statues were erected in the last 15 years after student initiatives. The Confederate-affiliated statues, besides Davis, are Gens. Robert E. Lee and Albert Sidney Johnston, and John Reagan, a postmaster general.

In a second editorial, the paper called on the university to give Davis the boot:

“Removing the statue would not cause students and others to not learn about Davis; rather, it would allow them to learn about him the right way, critically and in a classroom.”

Mandalapu, 21, of Sugar Land, said confrontations on other campuses, coupled with events at UT, such as a racist border-themed frat party in February and a series of bleach bombings in 2012 and 2013, have fueled a more serious discussion about race relations.

“People are standing up and protesting and speaking about what is wrong and what is right, and the Jeff Davis statue goes hand in hand with that,” he said.

While the statues have stirred fissures, some in the UT community say they likely go unnoticed by most students.

Clark Patterson, a 1988 UT alum and photographer who responded in the campus newspaper, said the context of the statue and its history on campus should be considered.

But he’s not convinced removing it would change the environment. “I bet if you gave a pop quiz to students and alum, less than 3 percent could even name half of the statues on the mall,” he said.

The setting of the statues came about in an unintended way.

The sculptor’s intent was to show, after the divisions of the Civil War, the “reconciliation between the North and South” during World War I, said Don Carleton, executive director of the UT-Austin Briscoe Center for American History.

The fountain symbolized the Atlantic Ocean and U.S. forces going to fight in Europe. In a semi-circle surrounding it were what Coppini called the war presidents of the North and South, including Woodrow Wilson and Davis, Carleton said.

But funding dried up before it was fully complete. Eventually, the statues were instead scattered around UT’s South Mall.

“What you have now are these isolated statues that are broken away from the original intent of the artist,” Carleton said. “It gives it a different meaning.”

Questions about the statues have bubbled up the same time as Texas has blocked the Confederate veterans group’s request for a license plate with its logo of a Confederate battle flag. The state denied that, the group sued and the case is pending before the U.S. Supreme Court.

UT is no stranger to fights over Civil War symbols. The debate has resurfaced every few years — often by way of student petition or protest — and then fizzled out.

A decade ago, UT president Larry Faulkner formed a panel of historians, including Carleton, and others to decide what should be done with the statues. Carleton said the panel floated various ideas: donating them to a museum, moving them closer to the Littlefield Fountain or installing plaques.

Ultimately, the group decided to add plaques to explain the context and original vision for the sculptures, he said. But that idea fell by the wayside amid changes in university leadership, he said.

It’s unclear what will happen to the student government proposal, but Carleton said such conversations about race will remain at the forefront.

“This didn’t just start with the OU chant. It’s an issue that in many ways hasn’t gone away since World War II. It ebbs and flows,” he said. “We’re a place where these kinds of debates are part of education.”