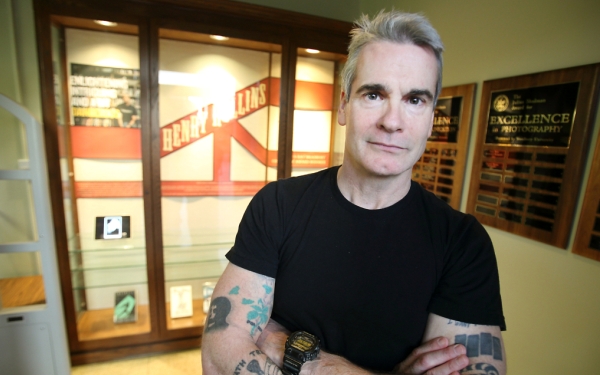 The two joined 329 undergraduate and 124 graduate students who received diplomas before a crowd of 4,000 classmates, friends and family members. Student speakers included Graphic Design candidate Gilberto De Jesus Ruiz-Ortega and filmmaker Juan Jose Hernandez-Quintanilla, both representing the School of Media, Culture & Design; and Danica Melina Foreska, a candidate in Management from the School of Business.

Rollins, who delivered the Commencement Address, encouraged graduates to travel, noting that he has visited almost 90 countries, “… And I’m only getting warmed up!” he told the graduates.

“This has not only deepened my appreciation for all life, but [also] sharpened my awareness of how inarguably connected all living things and their environments are, and what will be necessary moving forward,” Rollins said. “Because it is moving forward – however you want to define or actualize that – which will be key in this century. And I hope that every single one of you, in your own way, will be a meaningful part of that. Pardon me if this seems somewhat naïve, but my belief in this is unshakable. Educated people make the world a better place. They make it safer. They make systems run more efficiently. They make resources more sustainable. They mercilessly attack misery and cruelty, and eventually they win. There is only one part of your body that will truly evolve – your mind. Through pursuing higher education, this is what you have prioritized, and I cannot thank you enough.”

Perhaps best known as a vocalist with the legendary 1980s punk rock band Black Flag, Rollins also has distinguished himself as a spoken-word artist, television and movie actor (Bad Boys II, Sons of Anarchy), emcee of television’s 10 Things You Don’t Know About on the H2 network, radio host and columnist with the L.A. Weekly. In 2014, Rollins received the prestigious Ray Bradbury Creativity Award from Woodbury’s Friends of the Library. The award honors individuals whose contributions embody the creative spark and social conscience that characterized the late author’s work. Previous recipients include Kirk Douglas, Malcolm McDowell, Burt Reynolds, Jody Greenwald, Roy E. Disney, F. Murray Abraham and, in 1994, Bradbury himself.

Shoaf, an insurance executive from Newport Beach and Vice Chair Emeritus of the Woodbury University Board of Trustees, was honored for his 25 years as a Trustee and chair of the board’s Academic and Student Affairs, Trusteeship and Executive committees. In addition to his Woodbury service, Shoaf has held the office of CFO for two public school districts, was president of a worker's compensation joint powers agency, adjunct professor at Illinois State University, departmental business manager and member of the Dean’s Advisory Counsel at Purdue University, president of the Southern Central Section of the California Association of School Business Officials and president of School Business Executives. He currently serves on the boards of the Association for Corporate Growth Orange County and the Food Industry Risk Management Association.

Throughout his career, Shoaf has been active with Big Brothers and Big Sisters of Orange County, Burbank Community Hospital, Burbank Community Health Care Foundation and the Burbank Rotary Foundation. He earned a Ph.D. and M.S. degree in Administration and Economics from Purdue University and holds a B.S. degree in General Business Administration from Ball State University.

“I am honored and humbled to receive this recognition from Woodbury University,” Shoaf said, in accepting his honorary degree. “During my 25 years on the Board of Trustees, I have had the privilege to watch Woodbury University take its place as one of the top small private universities in the nation.”