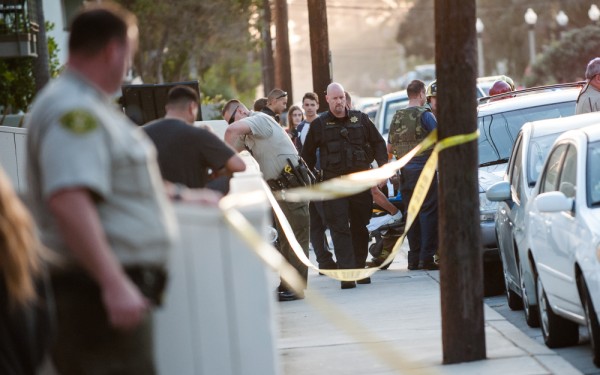 Richard Martinez, whose son, Christopher, was gunned down May 23, said in a statement that Monday’s incident was “the worst kind of reminder that gun violence can happen at any time and any place.”

The shooting Monday night took place in the 6500 block of Sabado Tarde Road in what the Santa Barbara County Sheriff’s Department said may be a drug-related shooting.

On Tuesday morning, students walked to and from class and rode skateboards and bikes down the street, which is two blocks from the beach. The yellow tape outside of the two-story apartment complex where the shooting occurred was gone.

A woman who declined to give her name but said she was a sophomore at UCSB said she was disappointed in the media for "sensationalizing" the incident.

"I think it really was a personal matter," she said, before plugging her earphones in and walking away.

Garrett Yost, a 21-year-old student at Santa Barbara City College, has lived across the street for about a year. He said more than anything, he was disappointed that "something like this" would happen in Isla Vista.

"This is such a great community," he said.

He said he's only slightly concerned for his safety.

"I think what our house decided is to be more conscious of locking our doors and keeping our doors shut," he said.

Authorities say two men attacked two UCSB students about 7:30 p.m. inside the students' apartment. Residents managed to subdue one of the alleged attackers, 22-year-old James Joshua Taylor of Lompoc, as he tried to flee.

Taylor and a second man, Jose Guadalupe Gutierrez, 19, of Goleta, allegedly confronted the two UCSB students inside the apartment, robbed them, shot them and fled.

Gutierrez knew the students but authorities wouldn’t describe how. He and Taylor allegedly shot the students – one in the abdomen, the other in the left side of the chest – during a fight inside the apartment.

While Taylor was held by residents until deputies arrived, Gutierrez got away. He allegedly took himself to a hospital in Goleta and told medical staff there he’d been in a car accident at UCSB.

“That was his alibi,” said sheriff’s spokeswoman Kelly Hoover.

But the alibi didn’t hold up. Gutierrez’s injury forced doctors to transfer him to a hospital in Santa Barbara, where authorities were tipped off and were waiting for Gutierrez to be released so they could take him to jail, officials said.

Taylor was hospitalized with a head injury. Details of Gutierrez’s injury were not immediately available; neither were the conditions of the students.

Both suspects were booked in absentia for investigation of attempted murder, robbery, discharging a firearm causing great bodily injury and participation in a street gang.

They will be taken into custody after they are medically cleared. Hoover could not say whether the victims had gang ties or what they had allegedly stolen.

The university had placed a lockdown on dorms and advised students, faculty and staff to shelter in place after the incident occurred. The lockdown was lifted shortly before 9 p.m., according to university officials.

The latest violence comes nearly a year after Rodger’s rampage left six people dead before he shot himself. After the incident, Martinez began his effort to strengthen gun control laws.

Last year's rampage began when Rodger killed three people, including his two roommates, then drove across Isla Vista and fired more than 55 rounds.

He fatally shot another three people and wounded 14 others.