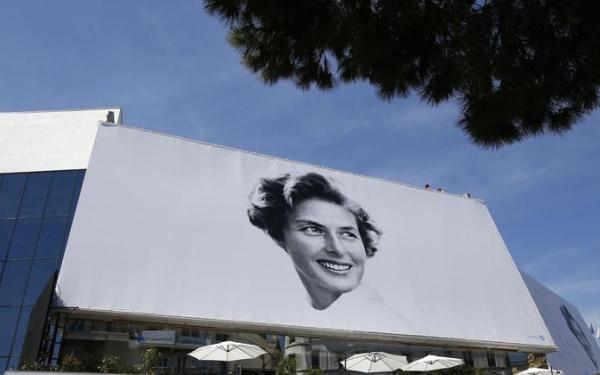 The official poster bearing a portrait of Swedish actress Ingrid Bergman looms over the Festival Palace on the eve of the 68th Cannes Film Festival in Cannes.
(Credit: Valery Hache / AFP/Getty Images)

CANNES, France — Huge, serene, majestic, the image of actress Ingrid Bergman floats like an ancient goddess over the secular chaos that is the Festival de Cannes.

Set to open Wednesday night, the festival has chosen Magnum Agency co-founder David Seymour’s photograph of Bergman as the image for this year’s poster, which explains why it hovers over everything on the front of the Palais des Festivals and in shop windows all over town.

But more than being beautiful and gifted, Bergman turns out to be the perfect fit for this year’s festival. Just as the actress divided her career between Hollywood hits such as “Casablanca” and “Notorious” and work with European auteurs including Roberto Rossellini and Ingmar Bergman, Cannes is similarly balanced between the hugely commercial and the die-hard artistic.

Yes, Cannes is going to show two of this summer’s hotly anticipated inevitable blockbusters, George Miller’s “Mad Max: Fury Road” and Pixar mainstay Pete Docter’s “Inside Out,” but both have been quarantined in out-of-competition slots for their own protection and so as not to contaminate the purity of the films competing for the Palme d’Or.

The 19 slots in the Palme race this year have been reserved for current as well as potential auteurs, such as Hungary’s Laszlo Nemes, whose Auschwitz-set “Son of Saul” is the only debut feature in Cannes’ main event.

Familiar big names on the festival circuit make up a big chunk of the competition. These usual suspects include Jacques Audiard (“Dheepan” focuses on a former Tamil fighter living in Paris), Hou Hsiao-hsien (with the martial arts-themed “The Assasin”), Hirokazu Kore-eda (“Our Little Sister” is based on a comic) and Nanni Moretti (“My Mother.”)

Two well-known Americans are bringing new movies as well: Gus Van Sant’s suicide drama “The Sea of Trees,” co-starring Matthew McConaughey and Ken Watanabe, and Todd Haynes’ “Carol,” with Cate Blanchett and Rooney Mara in a film adapted from a novel about a lesbian relationship by Patricia Highsmith, who wrote “The Talented Mr. Ripley.”

Also working in English are Canada’s Denis Villeneuve, whose “Sicario” takes us into the Mexican drug wars with help from Emily Blunt, Josh Brolin and Benicio Del Toro, and Australia’s Justin Kurzel, who has cast Michael Fassbender and Marion Cotillard in that bloody old standby “Macbeth.”

Directors native to other languages making films in competition in English is a bit of a mini-trend in Cannes this year. These include Greek enfant terrible Yorgos Lanthimos (“The Lobster”), Norway’s Joachim Trier (“Louder Than Bombs”) and two of Italy’s best-known filmmakers, Paolo Sorrentino (“Youth”) and Matteo Garrone (“The Tale of Tales.”)

A pair of other films are of special interest but safe from the whims of the jury (headed this year by the brothers Joel and Ethan Coen, similarly split between the indie and studio worlds). These are Woody Allen’s new film, “Irrational Man,” said to be one of his serious ones, and Natalie Portman’s feature directing debut, the Hebrew-language “A Tale of Love and Darkness,” adapted from the book by Israeli writer Amos Oz.

One of the most welcome Cannes trends is the exponential growth of the section known as Cannes Classics, the category that deals with cinema’s glorious past in so many ways that it has become, with 40 films under its banner this year, almost a festival in itself.

On tap are new documentaries about film (Kent Jones’ “Hitchcock/Truffaut” and “Steve McQueen: The Man & LeMans” look especially interesting); a centennial tribute to Orson Welles that includes his masterpiece, “Citizen Kane,” and a newly restored version of “The Third Man,” in which he co-stars; a selection of Lumiere films presented in (where else?) the Grand Theatre Lumiere; and numerous other restorations that include Luchino Visconti’s “Rocco and His Brothers,” Ousmane Sembene’s “Black Girl” and Kenji Mizoguchi’s “The Story of the Last Chrysanthemum.” Quite a collection.

If commercialism is discouraged in Cannes’ main competition, it is visible almost everywhere else, starting with the Marche du Film, the enormous movie marketplace where this year about 12,000 “industry professionals” from more than 100 countries will sit through as many of the 1,600 screenings as they can manage.

Commercial vigor is also visible in the areas surrounding Cannes’ hotels, where studios buy up space to promote anything promotable. Signs in a variety of languages (French, Russian, Hebrew, even English) line the driveway of the Majestic Barriere announcing the next episode of “The Hunger Games,” while a new Kevin Costner film called “Criminal” (as in “The CIA’s last hope is the mind of a criminal”) is touted nearby.

To sum it all up, Cannes can’t be summed out. It’s a festival where mass emails include one from a sex toy company announcing participation in a short film and another from a determined fellow journalist looking to round up a group eager for “some depravedly early jogs along the Croisette” starting at 6 a.m. Cannes takes all kinds. It really does.