Just hold on and enjoy the crazy ride with Mad Max 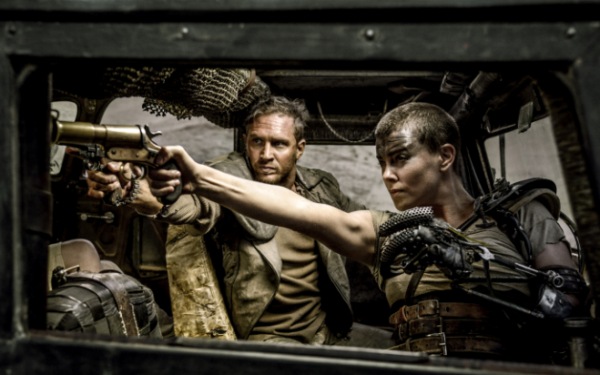 Max Rockatansky is back, madder than ever.

If you’re a devotee of director George Miller’s earlier “Mad Max” adventures, you’re in for a thrilling reunion. If you haven’t met this international treasure yet, prepare for a treat. This epic of the car chase genre is a gleefully violent vertigo ride, defeating your expectations about what action movies normally do.

“Mad Max: Fury Road” is amazing, dark, disreputable, playful fun, pure madness wrapped in fan boy pulp. And every step of the way it is breathtaking. It makes “Fast and Furious 7” look like “The Love Bug.”

A plot synopsis would reveal part of the film’s fireworks, and this is about thrills, not plots. So let’s be brief. We’re in dystopian future-land. Max, an apocalypse-surviving former cop, is held prisoner in a city commanded by Immortan Joe, a patriarchal monster. Max makes an adrenaline-fueled escape across the Australian outback in a massive, roaring getaway tanker truck. Pursuing even faster are Joe’s road-rage thugs, who are after his payload. Their wheels? Street-illegal racers, weaponized with plenty of things that go boom. Think Roman chariot races, at turbine speed, with plenty more explosions.

That’s the first act, the second act and the third act. It opens with impending doom and never slows down, knocking off supporting characters by the hundreds. And the fist pumps into the air for almost all fatalities are just as valid as cheering for the exploding shark in “Jaws.”

Keeping the audience at hypnotized attention isn’t hard with a thundering punk rock soundtrack and stellar cast. Tom Hardy (“The Dark Knight Rises”) leads the chaos in the title role. Oscar winner Charlize Theron (“Monster,” “Prometheus”) steals the stage as his warrior-woman opponent/ally Imperator Furiosa (I think that’s Latin for “fuming mad”). Nicholas Hoult (“X-Men: Days of Future Past”) does comic-relief sidekick duty as Nux, a young nitwit militant from the bad side.

Then there’s superb-looking camera work (retina-searing work by Oscar winner John Seale) and surreal wasteland locations in Australia and Namibia. It’s not a film of great depth, but oh my goodness, those surfaces!

Hardy, a performer who can express panic and frenzy with a glance, has at most 25 words of dialogue but he owns every shot. Watching him smash, dodge, shove and hang by his heels from a speeding 10-wheeler is viewing a gymnastic achievement. He has our feelings in a rugged grip, too, helping make this the most gut-wrenching and emotionally draining action film in years.

All through the film Miller keeps upping the ante of the dilemma Max and his runaway partners face. Just when their circumstances seem at the most dire, Miller always surprises us by making matters worse. One of those rare B movies that is also a dynamic work of art, “Fury Road” is equally gross and engrossing. Theron is outstanding as the film confronts the misogyny of action films both satirically and for shock value, creating moments that cause you to squirm and groan, “Oh, no.”

The fact that the story’s endless carnage is the result of corrupt human impulses gives it a resonance beyond the scope of typical action fantasy. We’re not facing an evil computer with an agenda of its own, but a power-mad psychopath and self-proclaimed deity. Immortan Joe is tyranny made flesh, the sort of human-twisting horror you might find in Goya’s “The Disasters of War.” The horror is at once specific and universal. There are images simultaneously hard to bear and uproariously funny.

Bringing back Max, it feels like Miller is having a laugh at 70, saying “I made ‘Babe’ and those ‘Happy Feet’ movies while my kids were growing up, now I can play with all the naughty stuff I’ve been keeping out of film for 30 years.” He has created a stylish sequel that has its own integrity, not just revived something that was popular.

What I like best about this film is everything. “Fury Road” is a testament to exciting cinema and to the barbarity that human beings inflict on one another. When you watch this one, buckle in tight, grab the armrests and hold on for dear life.