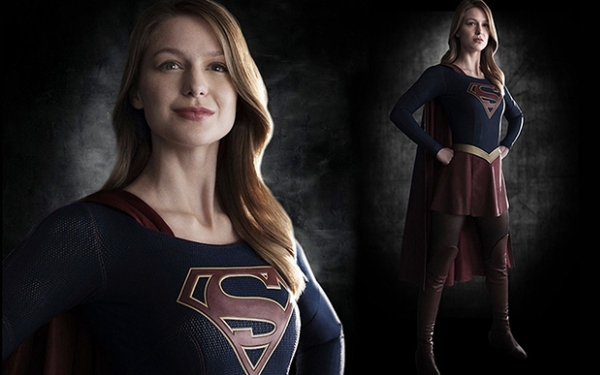 "Supergirl" will take flight on CBS this fall -- and take on the crime-fighters of "Gotham" in a battle of two comic book-inspired series.

"Supergirl" figures to be the most buzz-laden show amid a CBS fall roster that features three new dramas, two new comedies and, for the first time in 15 seasons, no "CSI."

Starting in November, "Supergirl," with Melissa Benoist in the title role, will be pitted against "Gotham" on Fox. It marks a radical strategic change for CBS, which traditionally starts Mondays off with comedies and, until now, has refrained from jumping on the comic book bandwagon.

CBS also announced the cancellation of "CSI: Crime Scene Investigation," which once reigned as the network's biggest hit. But the influential show will go out in style with a two-hour TV movie that reunites its original stars, William Petersen and Marg Helgenberger. The film is scheduled to air Sept. 27.

In addition, Ted Danson, star of the current "CSI" series, will move over to the spinoff show, "CSI: Cyber."

The new CBS drama include "Code Black," a medical series set in the nation's busiest E.R., and "Limitless," a story based on the Bradley Cooper feature film. It stars Jake McDorman as an average guy who can suddenly access 100 percent of his brain capacity with a mysterious pill. Cooper will appear in the series in a recurring role.

The new fall comedies are "Angel From Hell," featuring Jane Lynch as a "loud, colorful, often inappropriate woman who claims to be a guardian angel," and "Life In Pieces," an "irreverent" family sitcom with a cast that includes Dianne Wiest, James Brolin and Colin Hanks.

In addition, this fall will mark the debut of Stephen Collbert on CBS as the former Comedy Central star takes "The Late Show" reins from David Letterman. Colbert's premiere is set for Sept. 8.

On deck for midseason are returning shows "2 Broke Girls," "Mike & Molly," "Person of Interest," "Undercover Boss" and "The Odd Couple," as well as two new series, "Rush Hour" and "Criminal Minds: Beyond Borders."

Here's a look at the CBS fall schedule, with new shows in CAPS (other than the NCIS series):