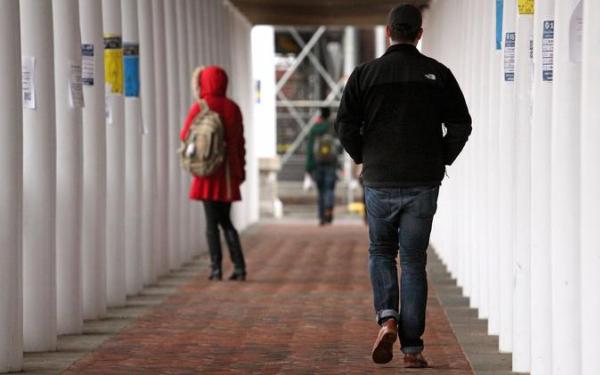 Students walk through an outdoor corridor on the University of Virginia campus in Charlottesville.
(Credit: Jay Paul / Getty Images)

A University of Virginia official, vowing to hold Rolling Stone accountable for one of the most prominent journalism scandals in recent memory, Tuesday sued the magazine and one of its writers for defamation stemming from a now-discredited story about an alleged campus rape.

Rolling Stone’s November 2014 article by Sabrina Rubin Erdely, “A Rape On Campus: A Brutal Assault and a Struggle for Justice at UVA” — which was retracted and taken off the magazine’s website in April — portrayed a lackadaisical response to the alleged incident by the university, particularly by associate dean of students Nicole Eramo.

“The Rolling Stone article has caused so much damage and reputational harm, both to me and also to so many others,” Eramo said in a statement Tuesday. “I am filing this defamation lawsuit to set the record straight — and to hold the magazine and the author of the article accountable for their actions in a way they have refused to do themselves.”

Eramo’s fiery, 76-page lawsuit calls Rolling Stone’s story a “monumental hoax” and accuses the magazine of “actual malice” in running a story by “a wanton journalist who was more concerned with writing an article that fulfilled her preconceived narrative about the victimization of women on American college campuses and a malicious publisher who was more concerned about selling magazines to boost the economic bottom line for its faltering magazine.”

A spokeswoman for Rolling Stone declined to comment on the lawsuit. A representative for Erdely said she also would have no comment.

Eramo also claimed in the lawsuit that Erdely defamed her in interviews the writer gave after the story’s publication. Eramo is asking for more than $7.5 million in damages, including attorney’s fees.

Rolling Stone’s article sent shock waves through the University of Virginia community in November, after it reported a student’s claims that she’d been gang-raped for hours at a fraternity and that university officials had brushed off her claims. It became the magazine’s most widely read non-celebrity story in its online history, reportedly attracting 2.7 million page views.

However, investigators and other journalists soon discovered multiple inconsistencies in the student’s account. The furor culminated in an April retraction of the article after a devastating Columbia University report, commissioned and published by Rolling Stone, exposed faulty reporting and fact-checking lapses by Erdely and the magazine.

The Columbia report found that Erdely and Rolling Stone’s editors had not fabricated information in the article, but had relied on the student’s account to the point that they failed to interview other witnesses and confirm key details that would have cast doubt on her story before publication.

Both Eramo and the fraternity named in the Rolling Stone story had suggested they might sue, and Eramo’s lawsuit in the circuit court of the city of Charlottesville marks the first legal salvo connected to the case.

The article, which said the university didn’t allow Eramo to give an interview to Erdely, said Eramo was “beloved” by campus rape survivors.

But it also alleged that Eramo had alluded to the University of Virginia as “the rape school” and failed to act on the student’s report that other women had been raped at the fraternity.

Eramo, in her lawsuit, accuses the magazine of selecting her to be the “chief villain” of the story and calls Rolling Stone’s claims “categorically false,” saying that she never referred to the university “the rape school” and that the student chose not to go to police with her rape allegations.

“As a woman who has dedicated her life to assisting victims of sexual assault and domestic abuse, Dean Eramo saw herself tarred in the national press as the chief architect of a conspiracy to suppress (the student’s) assault in order to protect UVA’s reputation,” the lawsuit states. “Dean Eramo received a wave of emails and letters from people across the country attacking her as, among other things, ‘evil,’ a ‘wretched rape apologist,’ and a ‘disgusting, worthless piece of trash.’”

Palma E. Pustilnik, an attorney for the student, declined Tuesday to comment on Eramo’s lawsuit.

Police and the Columbia University deans who reviewed the gang-rape allegations in the Rolling Stone article said the student did not cooperate with their investigations.