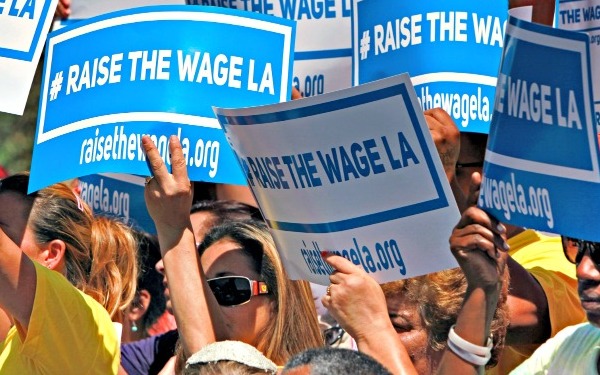 Amid a national discussion over economic inequality and following months of heated debate, Los Angeles is poised to dramatically hike the citywide minimum wage.

The full Los Angeles City Council is expected to approve the plan next week.

“This is dramatic; this is huge,” agreed City Council President Herb Wesson, whose office helped shepherd the deal through the council.

The hearing settled months of back and forth over the city’s minimum wage and came amid competing proposals to hike pay.

A few hundred people filled the Los Angeles City Council chambers Wednesday for the vote, a split of workers and business owners. The crowd was markedly smaller than previous hearings because City Council members gave just a day’s notice on the hearing.

Speaker Brenda Smith told the panel she had eight children and her wages weren’t keeping up with the cost of living.

Several studies commissioned by the city offered contradictory summaries of a wage hike’s effects. A study by the Center for Labor Research and Education at the University of California, Berkeley found the impact on overall employment following a $13.25 minimum wage by 2017 “is not likely to be significant,” while analysis by Beacon Economics predicted “significant negative effects.”

The city’s current minimum wage, which follows the state rate, is $9 an hour. Next year, California’s minimum wage rises to $10.

Some restaurant groups asked the City Council to create a new law counting tips as part of hourly earnings. Officials said Wednesday that state law forbids them from creating such a rule.

However, the city committee did make exceptions for smaller businesses and nonprofits: Those groups will have an extra year to phase in the new wages under the proposal.

Some groups left City Hall disappointed by Wednesday’s vote, including those who wanted higher wages on a shorter deadline.

“We wanted $15 by 2017,” said Giselle Mata, a member of the Alliance of Californians for Community Empowerment. “There’s still work to do.”