‘The Mindy Project’ is moving to Hulu 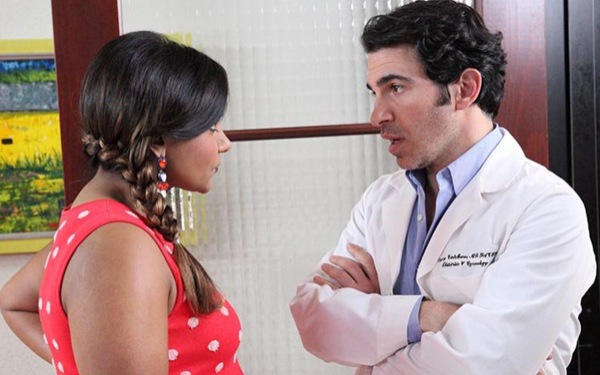 Mindy Kaling produces and stars in her own sitcom, "The Mindy Project," which was picked up by Hulu after not being renewed by Fox.
(Credit: FOX/TNS)

“The Mindy Project” has found love with Hulu.

Less than a week after rumblings surfaced that the Mindy Kaling comedy was eyeing a home on the streaming site following its rejection from Fox, a deal has officially been locked in.

Hulu announced Friday that it has ordered a fourth season of “The Mindy Project” that will total 26 episodes—making the comedy part of its original programming slate, and future seasons a possibility.

“I am thrilled ‘The Mindy Project’ has found a new home on Hulu, where so many of our fans are already watching the show. It’s such an exciting place to be,” Kaling said in a statement.

A premiere date for the fourth season will be announced at a later time, as will a delivery method (making episodes available all at once, or in batches).

Universal Television, the studio that makes “The Mindy Project,” began talks with Hulu immediately after Fox passed on a fourth season.

Taking the show and its loyal fan base to Hulu makes sense. Hulu is co-owned by Comcast’s NBCUniversal (in addition to Disney’s ABC Television Group and 21st Century Fox’s Fox Broadcasting Co.) and has become a second home to “The Mindy Project.” The service already has exclusive subscription video on demand (SVOD) rights to the show’s three seasons, and it’s one of the top-performing scripted shows on the service.

“Mindy has been a beloved member of the Hulu family, so this deal is a natural extension of our relationship,” said Craig Erwich, senior vice president and head of content for Hulu, in a statement. “With so many of her fans already catching up and tuning in to the series on Hulu, we know her millions of fans will be eager to find out what Mindy has in store for the next chapter.”

The platform jump also makes it the latest addition to the pool of cult shows that have found an afterlife on streaming services after a network has put the kibosh on them. “Community” moved to Yahoo for its sixth season after getting canned by NBC. When NBC passed on “Unbreakable Kimmy Schmidt” even before it premiered on the network, the comedy jumped to Netflix. And a seminal example was the resurrection of Fox’s short-lived “Arrested Development” on Netflix.

Universal Television’s executive vice president Bela Bajaria said in a statement: “We are excited about our partnership with Hulu and look forward to sharing our amazing comedy with the show’s many loyal fans for seasons to come.”

“The Mindy Project” was never a ratings force, but it did deliver an upscale female audience and critical praise. In its third season, the already modest “Mindy Project” audience shrunk even smaller. It averaged about 2.3 million followers, down from the second season’s 3.4 million average. Its Season 3 finale notched a .85 rating among the key 18-49 demographic.

While the deal is good news for “The Mindy Project,” Hulu also benefits from the agreement. Landing a name personality like Kaling keeps Hulu’s new-found momentum going as it pushes to establish its brand and compete more aggressively with its competitors Netflix and Amazon, both of which have launched shows with awards and buzz muscle.

Hulu recently inked a major SVOD syndication deal with Sony TV for the entire “Seinfeld” library—paying close to $1 million per episode. It also signed an output deal with AMC that would make Hulu the exclusive SVOD home for all future shows AMC Studios produces for AMC Networks, including “The Walking Dead” spinoff “Fear the Walking Dead.”

It all follows a slew of heavy-hitting licensing deals over the last 12 months, landing streaming rights to big shows such as “Empire” and “CSI,” and fuller deals with networks such as FX, Turner, Discovery, E! and Bravo. Not to mention Hulu’s upcoming original programming launches that boast big names, including the James Franco-starring “11/22/63,” an adaptation of Stephen King’s novel from J.J. Abrams, and the Amy Poehler-produced comedy “Difficult People.