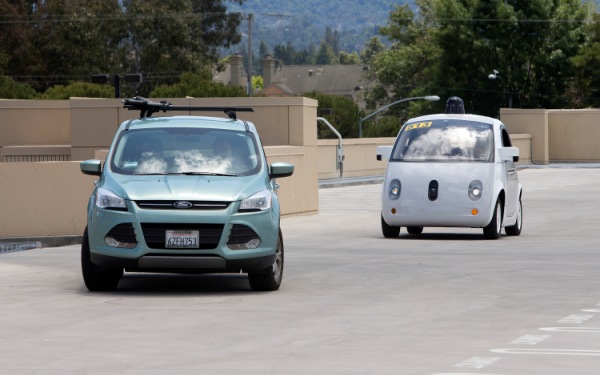 A two-seater prototype of Google's self-driving car, left, slows down as a SUV crosses its path during a demonstration at Google on May 13, 2015 in Mountain View, Calif.
(Credit: LiPo Ching/Bay Area News Group/TNS)

Google will start testing podlike self-driving car prototypes on public roads near its headquarters in Mountain View, Calif., this summer.

The prototypes are the first of a 100-car fleet the tech giant is building as it researches robotic car technology.

“Vehicles that can take anyone from A to B at the push of a button could transform mobility for millions of people, whether by reducing the 94 percent of accidents caused by human error, reclaiming the billions of hours wasted in traffic, or bringing everyday destinations and new opportunities within reach of those who might otherwise be excluded by their inability to drive a car,” Chris Urmson, director of Google’s Self-Driving Car Project, wrote on the company’s website Friday morning.

In previous testing, the cars have operated on a closed track. This next phase comes during a period of increased scrutiny on nascent autonomous vehicle technology.

Self-driving cars, including modified Lexus sport-utility vehicles operated by Google, are already plying California roads under a special permit program by the state’s Department of Motor Vehicles. The cars must have a driver, paying attention at the wheel, who is ready to take control of the vehicle in an emergency.

Four self-driving vehicles were in minor crashes recently, prompting some consumer advocates to ask Google and the DMV to make public all reports about accidents involving such cars. All four crashes were caused by human driving, and in two of them cars had been switched off auto-pilot mode, according to Google and Delphi, owners of the self-driving cars.

Glitches have started to crop up in automated systems already in vehicles sold to consumers.

Acura said Thursday that it is recalling approximately 19,500 MDX and RLX vehicles from the 2014 and 2015 model years because of a problem in an automatic braking system.

The cars have sensors that alert a driver to a pending crash and then trigger the brakes to prevent or reduce the severity of the collision. Acura said the system can become confused if a vehicle detected ahead is traveling near a metallic structure, such as a metal guard rail or fence. This could trigger the brakes unexpectedly, increasing the risk of a crash with cars following the Acuras.

No crashes or injuries have been reported related to this issue in the United States, but one collision was reported in Japan. Acura plans a software change to fix the problem.

Google’s vision is to get small transport pods operating, shuttling people from place to place, initially at slow speeds. The vehicle resembles an enclosed golf cart.

The Google cars can operate without a steering wheel, accelerator pedal or brake pedal.

“Our software and sensors do all the work,” he said “The vehicles will be very basic — we want to learn from them and adapt them as quickly as possible — but they will take you where you want to go at the push of a button.”

But the vehicles that will be tested on open roads this summer will have removable steering wheels, accelerator pedals and brake pedals to allow “safety drivers” to take control if needed.

Google says the cars are safe.

The vehicles have sensors “that remove blind spots, and they can detect objects out to a distance of more than two football fields in all directions, which is especially helpful on busy streets with lots of intersections,” Urmson said.

Speed will be limited to 25 mph.

The interior will be spartan — two seats with seat belts, a space for passengers’ belongings, buttons to start and stop, and a screen that shows the route.

“We’re looking forward to learning how the community perceives and interacts with the vehicles, and to uncovering challenges that are unique to a fully self-driving vehicle,” Urmson said.

For example, the vehicle has to figure out where it should stop if it can’t stop at its exact destination due to construction or congestion, he said.

Google’s Lexus fleet and other cars have driven nearly 1 million miles on autopilot and are now averaging around 10,000 self-driven miles a week, mostly on city streets.

By 2025, as many as 250,000 self-driving vehicles could be sold each year globally, and that number could swell to 11.8 million a decade later, according to a January study by IHS Automotive, an industry research firm.

“It is no longer question of if, but when autonomous vehicles will hit the road,” Xavier Mosquet, who head’s Boston Consulting Group’s automotive practice in North America, said earlier this week.

Already elements of automated driving are creeping into the automotive fleet. Several automakers now offer collision alert and automatic braking. Some new vehicles have systems that keep a car centered in a lane. Many cars now have sensors that alert drivers when vehicles are in their blind spots.

Cars with increasing levels of self-driving capability — including single-lane highway driving, valet parking and maneuvering in traffic jams — are starting to reach dealer showrooms this year and next, Mosquet said.