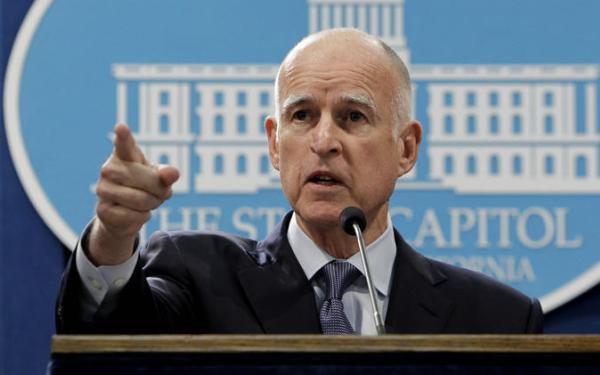 LOS ANGELES — The big winners in Gov. Jerry Brown’s plan to sharply increase education funding are undergraduates in the University of California system, who will have their tuition frozen for two more years, and the millions of elementary, secondary and community college students who are likely to see more teachers and counselors hired on their campuses.

With state revenues growing faster than previously expected, Brown said Thursday that he wants to pay down $436 million in UC’s pension debts over the next three years and boost spending by $3,000 for each of the state’s 6 million K-12 students. Additional money will also be given to public schools with large numbers of low-income students.

Brown’s revised budget was welcomed by campuses and school districts that had suffered layoffs and cuts in programs during the recession.

“This is spectacularly good news and a huge opportunity for schools,” said David N. Plank, executive director of the Policy Analysis for California Education, a research partnership of Stanford University, UC Davis and the University of Southern California. “We’re finally coming to an end of a cycle where we’re restoring what was cut in 2007. This is a moment where districts can launch in new directions.”

The two-year tuition freeze for undergraduate state residents at UC is the highlight of an agreement between Brown and UC President Janet Napolitano after months of negotiations to avoid threatened increases as high as 5 percent in each of the next five years. In-state students now pay about $12,200 a year for basic systemwide tuition and fees; that figure is triple what it was in 2002.

Out-of-state students — whose rising numbers have irked legislators and California families — are expected to face 5 percent tuition increases to about $36,900 next year, and further hikes in later years, officials said. Graduate students from California and elsewhere in such professional programs as medicine and business administration will see increases that vary by campuses and discipline.

Starting in the 2017-18 school year and in the following year, UC tuition for Californians will rise again in a formula that will involve the general inflation rate but will be capped at 5 percent annually, according to the plan.

“I think we’ve reached a very good agreement from the perspective of the university and for California,” Napolitano said in an interview. The pact, she said, will produce “a tremendous period of predictable tuition for California residents and will provide the additional financial resources we so sorely needed.”

Brown said that his proposal to pay some of UC’s pension debts will “stabilize their finances going forward” and that the agreement to freeze tuition for another two years “is very good indeed.”

California’s elementary and secondary schools laid off about 30,000 teachers and staff during the recession and some shortened their school years. Under Brown’s revised spending plan, public schools and community colleges can attribute much of their improved finances to Proposition 98, a 1988 voter-approved constitutional amendment that guarantees them the largest portion of state money.

The governor’s budget is seeking $6 billion more for K-12 schools and community colleges over his January budget, with a third of that targeted for students who are low-income, learning English or in foster care. Brown also proposed an additional $2.4 billion to help train teachers and provide instructional materials on new state standards in English and math known as Common Core, and $60 million for students with special needs.

Los Angeles Unified officials hailed the moves. Schools Superintendent Ramon Cortines said the estimated $300 million to $400 million in additional money would particularly benefit the district’s many disadvantaged students. School board members said that the priority will be to close what had been a $160 million budget deficit for next year.

Funding for California’s 112 community colleges is set to improve by $1 billion over last year, according to the governor’s new proposal. That is expected to accommodate about 65,000 more students in 2015-16 and add 600 full-time faculty, among other things, officials said.

“Our colleges are still dealing with the consequences of recession-era cuts that forced us to ration education,” community colleges Chancellor Brice Harris said.

California State University officials were disappointed that the governor didn’t fund their full request for the 23-campus system. Rather, the CSU system would receive $157.5 million more than last year under Brown’s plan. But that amount is nearly $60 million less than Cal State requested from the state to increase enrollment, hire more faculty and academic advisers and chip away at its backlog of maintenance needs.

Still, Cal State Chancellor Timothy P. White previously announced that annual undergraduate tuition — $5,472 — would not increase in 2015-16 and that pledge remained in place Thursday, he said, even as he seeks more money.

State Senate leader Kevin de Leon expressed disappointment that the governor’s revised budget didn’t provide more for Cal State, which enrolls nearly 450,000 students. “We are pleased UC students and their families will avoid paying higher tuition next year,” he said in a statement. “But CSU, the workhorse of our higher education system, has been shortchanged.”

Under the agreement with UC, the 10-campus system will receive 4 percent increases in state general revenue funding in each of the next four years, for a cumulative total of $507 million. Plus, in the sweetener that sealed the deal, UC is expected to receive an additional total of $436 million over three years from the state’s rainy day and debt reduction fund to help pay its pension obligations. UC also will receive about $50 million for deferred maintenance and energy efficiency projects.

Beyond the tuition freeze that Brown insisted upon, UC has agreed to tackle some of the governor’s other pet causes: capping pension benefits for future employees, increasing the number of transfer students by making the process smoother, expanding summer school, adding more online classes and making it easier for some students to graduate in three years. UC also will study why costs of similar courses vary widely among campuses.

Left unsettled so far is whether the number of California undergraduates at UC will be increased. Napolitano said in March that enrollment for in-state students would not grow without more state funds devoted to it, and Brown’s plan does not specifically set aside money for that increase.

Clearly the state’s much improved fiscal situation helped break the deadlock between two veteran politicians: Brown, who is in his fourth term, and Napolitano, who had been Arizona governor and U.S. secretary of Homeland Security before coming to the 238,400-student UC system in 2013.

Brown, who is a UC regent, and Napolitano formed an unusual two-person committee in January to privately examine UC’s spending and revenues. Their meetings seemed to calm the two sides and move them away from confrontation.

UC Student Association President Jefferson Kuoch-Seng said many students will be pleased with the tuition freeze but he said he wished it had been extended across the board to out-of-state and all graduate students. The proposal “is definitely a good start” to what he said was “a long-term solution to California’s higher education systems.”