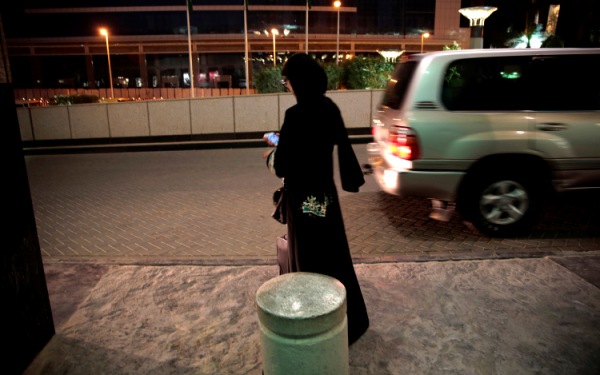 A woman waits for an Uber taxi at a shopping mall in Riyadh, Saudi Arabia, on April 8, 2015.
(Credit: Carolyn Cole/Los Angeles Times/TNS)

RIYADH, Saudi Arabia — When Hala Radwan returned to Saudi Arabia after obtaining a business degree in France, she was eager to put her new skills to use.

She found a job in the marketing department of a big international company. There was just one problem: How would she get to and from work in the only country that does not allow women to drive?

The mass transit options are notoriously poor. The cost of hiring a chauffeur was prohibitive. And she didn’t want to deal with the negative comments she would face if she tried to hail a cab in the conservative kingdom, where a woman using public transportation on her own is often seen as lacking morals.

“It was a nightmare,” she said.

Friends tipped her off to a solution: Uber and a regional competitor called Careem.

Smartphone-based ride services are becoming increasingly popular in Saudi Arabia’s major cities, especially among the large number of tech-savvy young people. Customers include foreign businessmen who don’t want to deal with the country’s sometimes chaotic taxi system. But more than 80 percent of individual users are women, the app companies say.

The apps have increased the mobility of and given a measure of independence to women who would otherwise have to rely on a male relative to ferry them around in the country which enforces a strict form of Islam. But with prices starting at about $5 a ride, even proponents concede it is not a solution for the poor.

Radwan, 29, spends nearly $700 a month on rides from Careem, with which she has a standing order to get to and from work.

The cost is slightly higher than for a taxi, but she finds the apps safer and more reliable. Both Uber and Careem use GPS technology to track their cars. With a few taps, she can see who will be driving her, the type of vehicle he uses and his customer ratings.

Better still, no one can tell she isn’t using a private car.

At least four ride-booking apps are available for download in Saudi Arabia, with more launches said to be in the works. The technology is the same as that used in the U.S. or Europe, but there are some notable differences in approach.

None of the companies work with drivers who use their personal cars to convey passengers at a fraction of the cost of a taxi or limousine service, a practice that has stirred conflict with transportation operators and regulators elsewhere. In Saudi Arabia, they say, they get their cars and drivers from licensed companies and charge comparable rates.

“We recognize that disruption is not the right model for this market,” said Careem’s founder, Mudassir Sheikha. “We’re trying to be good citizens and stay within the rules and offer a better quality of service.”

His company, which is headquartered in the United Arab Emirate of Dubai, was one of the first to enter the Saudi market in summer 2013. It now has nearly 100,000 users in the kingdom, a figure growing at about 40 percent per month, he said.

The service is available in five cities, including the capital, Riyadh, and the commercial hub of Jidda. Other options include the cab-hailing apps Easy Taxi and Mondo Taxi.

San Francisco-based Uber, which operates in more than 300 cities in 56 countries around the world, entered the fray a year ago. In that time, the number of users has increased twentyfold, one of the fastest growth rates in the Middle East or Europe, said Majed Abukhater, who serves as the company’s regional general manager.

“A lot of Saudis have used Uber globally and were really excited to see it launched here,” he said. Limo and car rental companies also like the arrangement because they are getting more business, he said.

Late last year, the transportation committee of the Riyadh Chamber of Commerce and Industry said it was looking into the operations of several apps, which it accused of using drivers who were not authorized to carry customers in the kingdom — charges denied by Uber and Careem.

The companies say the response from government officials has been mostly positive. There were challenges getting started, however.

Many drivers needed training to provide the premium service touted by the apps. They weren’t used to opening doors for their passengers or helping them with luggage. Their cars weren’t well maintained, and punctuality was a problem.

“Drivers were not even wearing proper uniforms. They were wearing slippers,” Sheikha said. “So we ended up having to buy them uniforms. … Then we had to start putting incentives in place for them to wear those uniforms.”

Although many Saudis own smartphones, credit card use is low. So Careem introduced a cash payment option. The company also operates a 24-hour call center, a reassuring feature for customers who may not be used to doing all their transactions online.

Customers say they appreciate the more professional and reliable service. There are few other transportation options, especially for women. Riyadh is building a metro system, but it is years from completion. Buses operate on limited routes and are mostly used by men.

“There are some (women) that take five to 10 trips with us every day,” Sheikha said. “We don’t see that kind of traffic anywhere.”

There is no law prohibiting women from driving in Saudi Arabia, but there are fatwas, or religious edicts issued by conservative Muslim clerics. As a result, the government won’t grant women licenses.

The effective ban, which is not enforced in other Muslim countries, is a product of the rigid segregation of the sexes in Saudi Arabia. Concerns have been raised here that allowing women to drive could put them into contact with male traffic officers, or in the case of an accident, male medics. One cleric even suggested that driving could harm a woman’s ovaries, a suggestion ridiculed by many Saudis on social media.

Female activists who have defied the ban, posting images of themselves behind the wheel on social media, have in some cases been arrested. Two women who were detained at the border when one of them attempted to drive from the United Arab Emirates into Saudi Arabia spent more than 70 days in custody before they were released in February.

Families with means will hire a chauffeur to take female members to work, to school, out shopping or to friends’ houses. But even that option has limitations.

“I have a driver, but sometimes he is too busy bringing my sisters from school,” said Gamar al-Douh, 24, who comes from a family of three girls with no brothers to help with the driving. “If I don’t have someone to take me, I use Uber.”

Radwan and her husband considered a chauffeur, but decided against it. The couple got married two years ago and are trying to save money to buy a house and raise a family.

Monthly salaries for a driver start around $400, but can be twice as high if the person is experienced and pays for his own accommodation.

Few Saudis are willing to do the work, so families typically face the additional expense of sponsoring a foreign driver for a work permit. Obtaining the visa and other documentation can cost between $4,000 and $7,000, Radwan said.

Even if the couple could afford a chauffeur, she doesn’t know where they would put him. They live in an apartment building in Jeddah that does not have rooms available for servants.

Her husband could give her a lift to work, but that would take him considerably out of his way.

Radwan used taxis while living abroad but avoids them in Saudi Arabia. Many cars are old and dirty, she said. In most cases, the meters don’t work, leaving passengers to haggle over the fare.

She and her friends used to be constantly swapping phone numbers for good drivers, but she said they weren’t always available.

“If you can’t find a driver, you have to wait for your husband. If not your husband, then your brother. And you know sometimes everyone is just so busy that going from point A to point B is really difficult,” she said. “You can’t even walk because (often) there’s no sidewalk, so you’re afraid of getting hit by a car.”

Now, the conversation with her friends has changed. If one of them needs a driver, they tell her, “Why don’t you take Uber or Careem?”