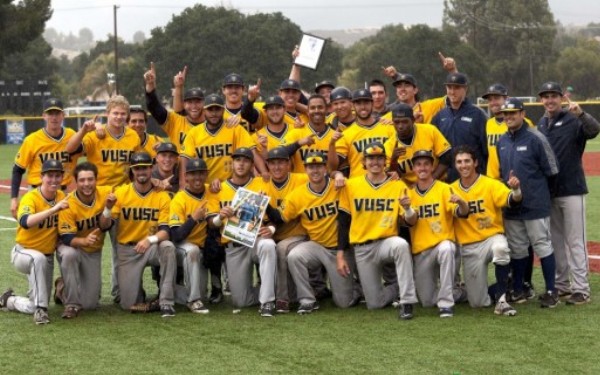 SANTA CLARITA — After four-plus hours of rain, the Vanguard University baseball team celebrated the biggest win in program history by forming its own human puddle near the mound on Thursday at The Master's College.

An enthusiastic dog pile followed the Lions' 8-0 win over Northwestern Ohio that punched Vanguard's ticket to the NAIA World Series, May 22-29, at Lewis-Clark State College in Lewiston, Idaho. The victory clinched the title of the five-team Santa Clarita Bracket of the NAIA Championship First-Round Tournament. It's the first World Series appearance for the Lions (38-20).

The Lions, who received one of the final at-large berths into the 45-school first round after losing six of their previous seven games, went 4-0 at The Master's, including a dramatic come-from-behind, walk-off win against the top-seeded hosts on Tuesday that helped spark the tournament sweep. The 38 wins are a school single-season record.

"It's wild," said Vanguard junior shortstop Jose Rojas, who bashed his team-leading 12th home run in the first inning, a two-run shot to give the Lions all they would need.

"It's a special run," said Vanguard Coach Rob Pegg, whose grin was as expansive as the Lions' sudden, and somewhat unexpected three-day excellence.

Junior pitcher Ryan Heinle worked a season-long 7 2/3 innings and senior Sam Frakes finished off the Lions' fifth shutout of the season, the first since Feb. 20.

"We played well all weekend," Heinle said. "The bats came alive when we needed them the most and our pitching was phenomenal. It was a total team effort."

Rojas went two for five and drove in three runs, while senior third baseman Taylor McKnight continued his torrid tournament by going two for four with a home run and a double, two RBIs and two runs.

Senior first baseman David Stone was three for four with a run and sophomore right fielder Brock Eissman went three for five with a run to help Vanguard produce 13 hits.

The Lions, who had eight errors in its first three tournament wins, played error-free against the Racers (45-15), despite the challenging weather conditions, which were made much more tolerable by an all-turf field.

"We're coming together at the right time," said Rojas, a first-team All-GSAC performer in his first season out of Fullerton Community College. Rojas had two hits in each game to finish the tournament eight for 16. His seven runs batted in matched McKnight for tops in the tournament and his seven runs in four games were best in the field, as were his two stolen bases.

"Rojas was huge and we got contributions from all our guys, offensively," Pegg said. "Our pitching was great and we caught some breaks. Definitely the defining win was against The Master's. We were down, 4-0 and battled back to tie. Then we fell behind, 7-4, with three outs to go and we found a way to score four and win in the ninth. When you get those things happening, baseball is a funny game that way."

Heinle, who improved to 4-2 and was the fourth VU tournament starter to work deep into the game, allowed six hits, walked two and struck out three. He remained in the game despite two rain delays of 13 and 45 minutes, before giving way to Frakes, who fanned three and surrendered just one hit.

"It's a pretty good story," Heinle said of being Idaho-bound. "We want to dedicate this win and the whole tournament to our [late assistant coach, Ted Browne], who passed away in the summertime. This is all for him."

A laminated photo of Browne, who died of a heart attack in August, three weeks before the fall semester began, was taped up in the dugout next to the lineup card. And Pegg plucked it off the wall to include it in the celebratory team photo after the game.

"We're excited," Pegg said. "We're not done yet. We believe we are a great team, if we play our best. It will be exciting [in Idaho]."

McKnight, who had an opposite-field, two-run homer Thursday, was seven for 15 with two dingers in the tournament. Thursday was McKnight's second home-run trot in two days, after having produced just one big fly previously this season.

Stone was seven for 17 in the tournament, while Eissman, sophomore Brandon Sandoval and senior Bret Collins all had six hits and three RBIs in the four-game blitz in which Vanguard outscored teams, 30-13.

Three Northwestern Ohio errors helped Vanguard score four in the fourth inning, only one of which was earned.