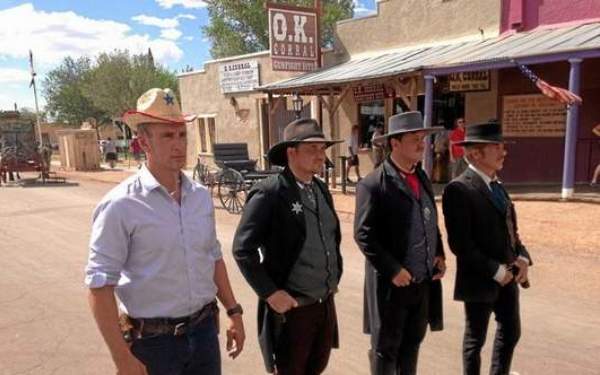 Brian Unger, left, gets ready for the big shoot out at the O.K. Corral on his new "Time Traveling" show.
(Credit: Travel Channel)

On Monday, Travel Channel’s “Time Traveling with Brian Unger” turns back the clock on Hollywood and dares to go where ordinary travelers can’t.

It’s all thanks to the magic of CGI and a witty host.

Unger, a Sherman Oaks-based comedy actor and producer whose credits include “The Daily Show with Jon Stewart,” “It’s Always Sunny in Philedelphia” and “How the States Got Their Shapes,” says the idea of the show that airs at 10 p.m. is to partner travel with “the history that is right under our feet.

“It’s the day-to-day history we take for granted,” he says, speaking by phone from rural Kentucky, where he just left the grave site of thoroughbred racing legend Secretariat for a future episode. “The buildings we pass by that are historic but look like they need to be torn down, or even the places where there are contemporary structures that leave us wondering: What was there before?”

A combination of research, storytelling and old photos brought to life through CGI help transport Unger and his historical explorers to different time periods and locations — they’ve watched the Golden Gate Bridge go up in San Francisco during the midst of the Great Depression, visited Las Vegas back when it was a “mecca for the hurry-up divorce” and rambled the dusty streets of Tombstone for the truth about the shoot-out at the O.K. Corral. For the L.A. show, they get a behind-the-scenes look at some of the city’s fabled hotels, starting at the 1923 beaux arts-inspired Millennium Biltmore Hotel Los Angeles for some Academy Awards history.

Q What happens at the Biltmore?

A I take the time travelers into the banquet hall where the first Oscars ceremony occurred and turn the clock back using old photographs. We see the stars in the room and we begin to re-experience something that Angelenos don’t know about.

Q Would you give us another example?

A I loved the (Charlie) Chaplin story because when I started traipsing around Los Angeles in the footsteps of the Little Tramp, I started to understand that he was our first guerrilla filmmaker. He used every part of Los Angeles as his backdrop, from Venice to downtown to Hollywood. He used streets and storefronts. He used the city. His office there on La Brea is so beautifully intact.

Of course, there’s a Muppet on top.

I never understood why Kermit the Frog had on a dirty hat and a cane until we started researching it. And I’ve been living in Los Angeles for 14 years.

Q You also get into a bit of rock ’n’ roll history, right?

A Yeah, we do. We explored what is now the  Andaz Hotel (West Hollywood) because we couldn’t tell a Hollywood hotel story without going to the room where Keith Richards threw his television out on Sunset Boulevard.

Q Don’t tell me: It hits viewers on the head?

A It won’t fall on top of you, but you’ll have a great angle from the Sunset Tower looking at the “Riot Hyatt” (in 1972, it was the Continental Hyatt House), and you’ll see that television break the glass and hit Sunset Boulevard in beautiful 4K technology. It’s pretty impressive.

Q How do you think the L.A. history you’re telling will compare to some of the other locations you’ve visited so far?

A It’s funny, at first I had my doubts about how much history could we really tell about hotels. But everyone I’ve shown the piece to says it’s their favorite and I think that’s a testament to the fact that Hollywood culture is so accessible. It’s so familiar that any new dimension is really compelling.

Q In shooting the “Time Traveling” sequences, is there acting involved on your part and the part of your travelers?

A There’s no acting, but there is a lot of imagining. We are having to pretend that a lot of this history is unfolding before us. My job is to narrate that and bring it to life. I paint a narrative where the time travelers feel engaged, they experience it and begin to feel the weight of history.

Q And do they feel that weight?

A We took some visitors on Sherman’s March, and when we arrived in Savannah at the offices of Gen. Sherman from which he commanded the armies in the last days of the Civil War, one of our guests broke into tears. She felt the weight of history.

She remarked how slaves had been freed along the march but yet in this office that was pristine and grand, she said, “Someone cleaned his office who looked just like me.”

TV Time
(Almost) every show coming to TV this summer. And 29 that aren’t
287 views

TV Time
‘All Rise’ is the first TV drama to tackle coronavirus. Here’s how they did it
321 views