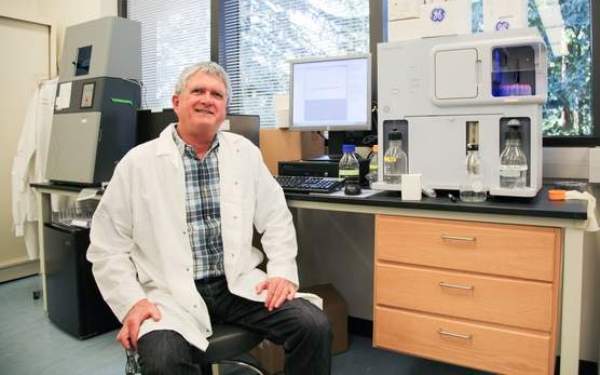 UCSC biomolecular engineering professor Phil Berman has developed an HIV vaccine he hopes will be even more effective than his last version.
(Credit: Carolyn Lagattuta -- Contributed)

SANTA CRUZ -- For 30 years, UC Santa Cruz professor and vaccine developer Phil Berman has been chasing a moving target — the insidious, ever-changing HIV virus — and now, finally, he thinks he has it cornered.

Berman’s lab has developed an experimental vaccine he believes will guard against HIV and AIDS. The model is expected to go to clinical trial within three years.

When Berman was a Genentech scientist in the 1990s, he invented the world’s first vaccine to show any success against HIV. When it was tested with another vaccine in a 2003 to 2009 large-scale trial involving 16,000 people in Thailand, the vaccine combination proved a 31 percent success rate.

But that’s not high enough for regulatory approval, which requires a 60 percent rate, said Berman, and this new model, drawn from his previous work, will prove stronger.

Berman’s approach, like most other vaccines, is to create a decoy by mimicking a protein on the virus’s surface. When this protein is injected into the bloodstream, it spurs the patient’s immune system to create antibodies that recognize and kill it.

Now if the HIV virus were introduced, the patient’s immune system is primed and ready to kill.

The key to his new model, said Berman, is new sugar molecules on the vaccine’s surface. Some of the most potent antibodies are ones that bind to these sugars, which previous models were missing, he said.

“It’s a huge technical challenge to be able to make small fragments that fold up in the right way and incorporate the right kind of carbohydrates, or sugar molecules, in a way that can be manufactured on a large scale,” Berman said.

Creating a successful vaccine is like starting with a model of the Wright Brothers’ propeller plane and redesigning it until you have a space shuttle, he said.

“I think that’s it. You have to start with something simple and then you can make improvements over time,” said Berman. “And then you have to take the concept out of the hangar and see if it will fly.”

Berman said he’s proud that an early model of this vaccine was the first to be sent to large-scale clinical trial to test against HIV, from 1998 to 2003, with 7,500 people in North America and Thailand.

“At the time, people thought it was impossible to do HIV vaccine trials,” he said.

Most thought patients would be too difficult to recruit and retain, immunizations too numerous and ethical, informed consent too challenging.

“All those fears turned out to be unfounded,” Berman said. “Even though those vaccines failed, that trial threw the door open for other vaccine trials.”

The HIV virus is uniquely sinister — as it replicates inside the host, the copies always contain mistakes, called mutations.

“In the course of infection, someone has literally billions of copies of this virus. And one of the things that’s so insidious about HIV is that these copies that have a mistake become immortalized in your DNA,” he said.

HIV creates a library of mutated copies, forever stored in the infected person’s DNA. When the immune system is weakened, the virus activates copies that evade antibodies, Berman said.

“So there’s this race between your immune system, represented by your antibody response, and the virus,” Berman said. “The virus is always changing and your immune system is trying to keep up. The kind of vaccine we’re making is to prevent infection all together, so that the virus never establishes this big library of variants. We’re trying to create complete protection so that the virus never gets a foothold.”