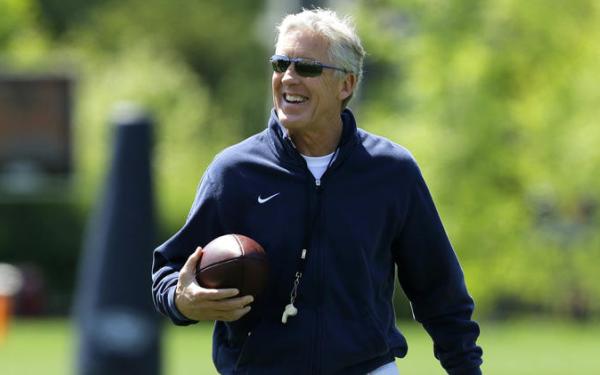 Seahawks Coach Pete Carroll is all smiles during a rookie camp on May 8.
(Credit: Ted S. Warren / Associated Press)

Pete Carroll added to his football resume after he left USC, leading the Seattle Seahawks to one Super Bowl title and to within seconds of another.

Carroll’s academic resume will expand, at least symbolically, on Friday when he receives an honorary degree from USC during commencement ceremonies on campus.

“I feel very fortunate to be included in the group of people that are being recognized -- it’s really special,” Carroll said in a phone interview.

Then he added, chuckling, “Of course, it has nothing to do with my coaching ability. It’s my academic prowess.”

Carroll, who guided USC to two national titles and compiled a record of 97-19 in nine seasons with the Trojans, played college football and coached at the University of the Pacific. He said he earned a business degree, a secondary teaching credential and a master’s in physical education from the school.

Asked if the business degree had helped him in coaching, he joked, “Oh, very much so, particularly my work with the [NFL salary] cap.”

Carroll also will be inducted into USC’s Athletic Hall of Fame on Saturday. Carroll is one of 16 honorees.

“There will be a lot of ‘Fight On’ spirit in one weekend for me. I’m going to have a blast.”

Carroll reiterated that his experience coaching the Trojans helped him succeed with the Seahawks.

“The time at SC gave me the opportunity to zero in on an approach and philosophy that has been tested in the college ranks and tested in the professional ranks and it was able to stand up,” he said.

“I didn’t change anything…. It was the same standards, the same expectations and, primarily, the way we treated people.”

In February, the Seahawks were on the verge of clinching a Super Bowl victory over the New England Patriots. But quarterback Russell Wilson’s pass from the one-yard line with 26 seconds left was intercepted.

Carroll said he had moved forward, just as he did after the Seahawks defeated the Denver Broncos to win the Super Bowl the season before.

“I’ve always been saying the effect of winning can be just as devastating as the effect of losing -- it’s how you respond to winning the Super Bowl and to losing,” he said. “We had to deal with that and put that behind, and that’s what we’ve done.

“Both were extremely significant. ... So we rely on our philosophy of getting back to business. To learn from it and grow from it.”