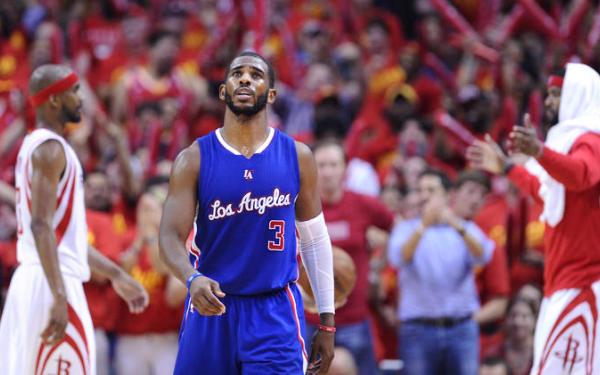 Clippers point guard Chris Paul (3) checks the scoreboard as he heads to the bench during a timeout in the fourth quarter of Game 7 against the Rockets on Sunday in Houston.
(Credit: Wally Skalij / Los Angeles Times)

The game wasn't over when Chris Paul made his congratulatory rounds. There was a hug for James Harden and a hand slap for Dwight Howard before the Clippers point guard returned to the bench momentarily, only to walk back onto the court and embrace Trevor Ariza.

Paul lingered for the final, agonizing 18 seconds of his season before confetti and streamers poured into the Toyota Center air and he disappeared into one more bummer of a summer.

Another playoff party went on without the Clippers, who completed their colossal collapse Sunday with a 113-100 loss to the Houston Rockets in Game 7 of the Western Conference semifinals.

Declared NBA title favorites as recently as a week ago, the Clippers dropped the final three games in a bizarre series in which they won a game on the road without Paul, prevailed in home games by 25 and 33 points and were leading by 19 points late in the third quarter of a potential close-out Game 6 they ended up losing by 12.

"We can't look at anybody but ourselves," Clippers forward Blake Griffin said. "It's disappointing."

The Clippers had taken an optimistic approach Sunday, packing enough clothes for the first two games of the conference finals against the Golden State Warriors. But Houston will be taking the flight to Oakland after advancing past the second round for the first time since 1997.

Meanwhile, the Clippers will contemplate the latest and most maddening failure to reach the conference finals in their 45-year existence.

"You never want to equate sports with death," Clippers shooting guard J.J. Redick said, "but it does feel like a wake or a funeral."

The Rockets never trailed Sunday in becoming the ninth team in NBA history to rally from a 3-1 deficit to win a series, and the first since the Phoenix Suns against the Lakers in 2006.

Matt Barnes stepped out of bounds on the Clippers' first possession of the game and things never got much better. The Rockets' lead grew from nine points in the first quarter to 15 in the second to 17 in the third.

The mental strain of back-to-back losses in close-out games was apparent from the opening tip as the Clippers committed seven turnovers in the first quarter, failing even to execute inbounds passes. They would finish with 18 turnovers — six by Redick, five by Griffin.

"Myself included," said Griffin, who along with Paul and DeAndre Jordan lost a Game 7 as teammates for the first time after three previous victories. "We wanted it so bad that we didn't make the plays we normally do."

The Clippers cut their deficit to three points early in the third quarter and to eight points on two occasions in the final minutes. Redick missed a three-point attempt that could have brought the Clippers to within five before the Rockets' Ariza made a three-pointer in the corner with 55 seconds left, holding his follow-through as he turned toward the Clippers' bench.

Redick, Barnes and Jamal Crawford combined to make 10 of 32 shots, including five of 19 three-point attempts. Their inaccuracy was an ongoing theme in a series in which the Clippers made only 32.9% of their three-point shots, down from 37.6% in the regular season.

Harden finished with 31 points and Ariza had 22 for the Rockets, who as the series progressed finally resembled the team that had won 56 games during the regular season.

"They were absolutely relentless for 48 minutes and we were not," Redick said, perhaps unintentionally referencing the mantra of Clippers owner Steve Ballmer.

Clippers Coach Doc Rivers said the dynamics of the series shifted more so after his team's lackadaisical Game 5 effort than after its Game 6 meltdown.

"I thought they were ready to go home if we supplied the pressure," Rivers said of the Rockets in Game 5, "and we didn't."

Rivers acknowledged that getting some help for stars Paul (26 points, 10 assists), Griffin (27 points, 11 rebounds) and Jordan (16 points, 17 rebounds) was on his off-season to-do list, along with re-signing Jordan.

Paul gets several months to consider finishing one victory short of the conference finals for the second time in his 10-year career.

"So close," Paul said, repeating a question before making a reference to a fictional NASCAR driver. "I don't even know what that means anymore. I don't know. Like Ricky Bobby says, 'If you're not first, you're last.' Getting close ain't good enough."