For LAPD investigators, cases involving child victims can be hard to shake 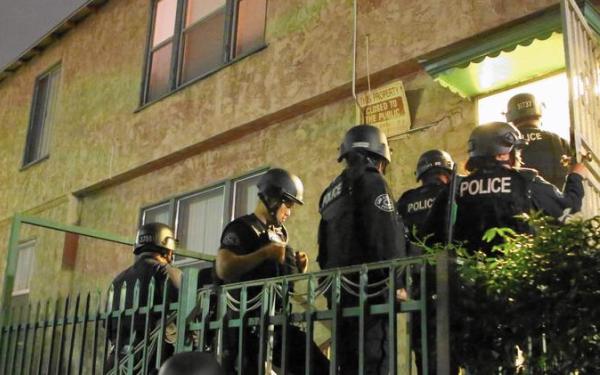 Shrouded by darkness in the early dawn, the heavily armored investigators marched toward the Mid-City apartment on St. Elmo Street. One of the officers strode straight to a door on the first floor and banged on it, yelling in Spanish for it to be opened.

On the other side, a desperate young man was stuffing an iPad with 80 downloaded images of child pornography into the cushions of a couch, a detective would say later.

Within moments, 19-year-old Abraham Escoto, his father and uncle were standing outside. The lanky young man with disheveled hair had only recently moved to Los Angeles from Mexico to live with his father.

Escoto told the investigators standing around him that he would never touch a child.

The Los Angeles Police Department's Internet Crimes Against Children unit serves about 300 warrants each year in pursuit of child pornography suspects. In a high-rise building in Long Beach, 11 officers review an average of 350 child pornography cases a month.

The unit is a byproduct of an age in which almost everything can be shared electronically, whether on social media or in dark, digital back alleys. Detectives say many teens share nude photographs and videos, unwittingly contributing to a web of material that is distributed as child pornography. There are apps that essentially allow adults to pretend they are children, investigators say.

They comb through hundreds of tips from other LAPD officers and law enforcement agencies and the National Center of Missing and Exploited Children.

The center has reviewed more than 132 million child pornography images since it was created in 2002.

The case against Escoto started with a tip.

Eventually released on bail, Escoto pleaded not guilty to child pornography possession charges. He will appear before a judge June 9.

Det. Carlos Monterroso said he has seen it all: a child predator who maintained a pristine Barbie doll collection, a suspect who believed he was a vampire. He has encountered child predators whose addiction to child pornography was so profound they refused to step away from their computer screen to use the restroom.

Some cases are so intense that investigators are required to visit a psychologist.

Working with Internet service providers, search engines such as Google, and social networking sites such as Facebook, investigators request email and phone records to prove a suspect has downloaded child pornography.

Escontrias, an LAPD veteran with 31 years' experience, said his unit once encountered a man who had plastered child pornography on the wall of his apartment as if it was art.

Garcia, who previously worked with the U.S. attorney's office and a joint electronic crimes task force, pleaded no contest in October and was sentenced to five years' probation.

The former prosecutor is required to register as a sex offender for as long as he lives.

Some cases fall into a gray area, Escontrias said, because of the age not only of the children in images, but of those caught with the images. When underage teenagers and pre-teens share nude images of others their age, those images could be considered child pornography, he said.

In those situations, Escontrias said, he and other investigators then have to visit parents and sit down with their children.

"Parents have to be very aware," Escontrias said. "It's a digital playground."

Once an image hits the Web, he said, it tends to stick, getting downloaded and shared by child predators.

"The biggest issue is the fact that this stuff doesn't go away," Escontrias said.

For investigators, maintaining their mental health is important in the LAPD's Internet Crimes Against Children unit, Escontrias said. The detective, who used to work in a mental health detail, hosts "Mental Health Days" that allow investigators and their families to unwind during social gatherings.

Monterroso tries to keep his work at the office. A married father of two, he hits the gym and takes his children to softball and Boy Scout outings — anything to keep the unsavory details of his job from worming into his brain, he said.

But some cases are difficult to shake.

Monterroso, a tall, broad-shouldered detective with a friendly grin, recalled a case involving a teacher who taught children with autism. Monterroso got a tip that child pornography was found on the teacher's computer.

During a search of his home, investigators found several journals detailing his encounters with children. In them, the teacher described his affinity for a student whom he had molested, the detective said.

The boy suffered from severe autism and couldn't speak.

Monterroso presented the case to prosecutors, who filed charges against the teacher based on the illicit images. But they declined to file molestation charges because the boy couldn't talk about what had happened to him.

Monterroso said it felt like a defeat. But it's also why he does what he does.

"That's my purpose," he said. "It's to protect [children] because they don't know what's going on."