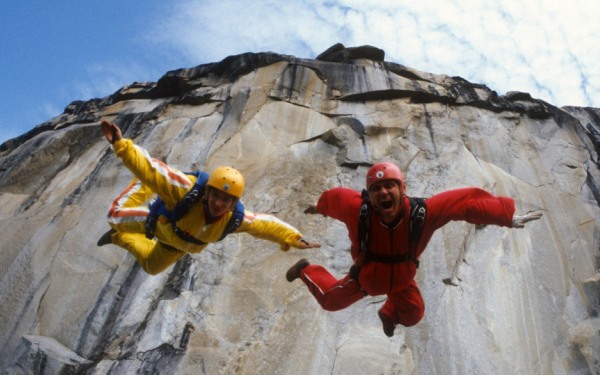 There are those who watch from the safety of the ground, who mask their eyes against the sun to catch a glimpse of someone who really must be crazy. He’s willing to risk his life for a thrill after all. And then there’s the supposedly crazy person, who watches the people down below, masking their eyes from the sun as he prepares to jump from the tallest building, TV tower, or cliff that he could find. This man is Carl Boenish. This man hasn’t just found thrill; he’s found freedom.

This is the trail that we follow in Sunshine Superman, the trail of the man who suffered the crippling limitations of polio as a child, and went on to father a rather unlikely extreme sport: BASE jumping. It is a simple acronym for the not-so-simple activity of parachuting off various tall precipices: building, antenna, span and earth. And thanks to the fancies of Boenish, it would become a hobby for adrenaline-junkies around the world.

For first-time director Marah Strauch, the story was never going to follow the formulas of a sports documentary. Coming from a visual arts background, where she embraced experimental methods of expression, Strauch knew that there was a spirit to capture, both in the act of BASE jumping itself, as well as in Boenish’s wildly unique character.

As viewers, we can count ourselves lucky for Strauch’s vision, because Sunshine Superman bursts with the same whims of adventure and enthusiasm that these jumpers embrace. We see, through many interviews with both the daredevils and the authorities that sought to hold them back, that the initial feeling of tipping over that edge is unquenchable and even necessary.

What is somewhat astonishing, however, is that after hearing his uncontainable enthusiasm about throwing himself off steep edges, Boenish’s first passion actually laid in filmmaking. That means every single second of evolution of the sport, from his early days of skydiving in the 60s, to breaking the world record for BASE jump height in the Norwegian mountains in ‘84, we get to see every single gut-dropping lick of it, and beautifully so.

There are signs, however, pointing towards faults of a debut filmmaker. Sprinkled throughout Strauch’s and Boenish’s rich and nostalgic imagery are reenactment sequences that fall limp in comparison, and while they may have been necessary to add a more dramatic edge to his tale, it needed a firmer hand in terms of composition and direction.

Additionally, there is a huge vacuum of information when it comes to Carl Boenish himself. Much of the documentary is spent reflecting on his incomparable character, where his ceaseless enthusiasm and lust for life couldn’t be contained. While some testimonials speculate the nature of his eccentricities, Strauch doesn’t seem to prod directly as to why he is so. We get hints of his Christian Scientist faith, of his history with polio, yet it seems we lost a huge part of the picture of the man who changed extreme sports, which is truly disappointing after the vigorous sense of adventure Strauch brought to the rest of the film.

But then we are greeted with a love story, however unorthodox, in Jean, a quirky nerd-type who stumbled into Carl’s life and who quickly became partners in both BASE jumping and in marriage. While she may not seem entirely comfortable reliving these years in interviews, Jean Boenish matter-of-factly recounts why it was a seamless professional and romantic match. But make no mistake; this is no Hollywood romance. Where we might expect grand gestures of love or mournful tears in the inevitable moments of tragedy, there simply is none. As Jean says, it’s their job, it’s their life, and there’s no need for embellishment, which I believe to be intriguing in itself.

And that’s really the through line of Sunshine Superman; the inherent right of every person to attain freedom, even a sense of it, by whatever means necessary. Strauch illustrates that freedom shouldn’t be a special, unattainable notion, glamorized by the few who could grab it. So while there may be a frustrating amount of mystery concerning Carl Boenish himself, we are left with an intoxicating breath of adventure that is impossible not to fully inhale, as we feel that terrifying, yet insatiable sense of life fill our lungs.

Click here to register to win a Magnolia DVD pack, a Sunshine Superman movie poster and an iFly gift certificate in L.A.

Sunshine Superman opens at The Landmark in L.A. and at AMC Empire 25 and Sunshine Cinema in New York on Friday, May 22nd.