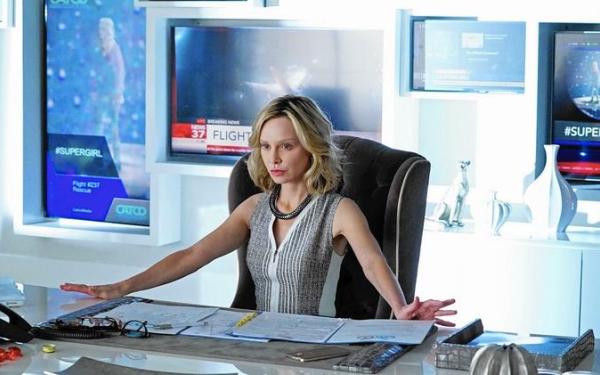 Calista Flockhart stars in CBS' "Supergirl," a trailer for which was received warmly by media buyers at a presentation in New York last week.
(Credit: Richard Cartwright / CBS)

Comedy may still be a desired staple of prime-time TV, but broadcasters haven’t found much to laugh about for the upcoming season.

The TV networks unleashed their 2015-16 evening lineups in New York last week, leaving industry insiders buzzing about the Great Comedy Rollback. Burned by a high number of sitcom flops in recent years, programmers have decided to stop trying to bring the funny.

NBC, onetime home to generation-defining hits “Friends” and “Seinfeld,” has exiled comedy to the dead zone of Friday nights. CBS benched “2 Broke Girls” until midseason and decided to take a flier on the drama reboot of “Supergirl,” setting up a superhero battle on Mondays with Fox’s young-Batman epic, “Gotham.”

Here’s a telling fact: This will be the first time since 1949 that CBS hasn’t kicked off Mondays with a comedy.

Can programmers be serious? Well, yes. Serious, sober and guarded are the bywords of the day. Add, perhaps, risk-averse and even fearful. Ratings keep plunging and viewers are fleeing to cable smashes such as “The Walking Dead” as well as streaming critical darlings such as Netflix’s “Orange Is the New Black.”

Programmers’ aversion to new comedy also makes more sense when one takes into account that many teenagers and twentysomethings never watch any network sitcoms.

So broadcasters have decided to tread carefully, nurturing what modest successes they can point to while avoiding the big, crazy swings. Some whole blocks of prime time will be left untouched next season. No. 3-ranked ABC is returning its Monday, Wednesday, Thursday and Saturday schedules without a single change.

Such non-maneuvers left more than a few observers feeling underwhelmed.

“It’s a very conservative season and surprisingly humble,” said Tom Nunan, a producer and former president at UPN (now the CW) who teaches at the UCLA School of Theater, Film and Television. “The most exciting programs and most exciting risks are being taken on cable and in streaming, and this year it’s as though the networks simply admitted it and laid down their arms.”

Ambition has its limits, though. ABC is also reviving “The Muppets” — the puppet characters whose roots stretch back to the 1950s — and “Uncle Buck,” an adaptation of the 1989 feature comedy. NBC is pitching a miniseries about 69-year-old country icon Dolly Parton and a live remake of the 1970s musical “The Wiz.”

The networks have little choice, according to some experts.

DVRs and on-demand platforms such as Hulu and Amazon have made viewers much less reliant on the network schedules that have governed prime time since the late 1940s. Young viewers in particular expect programs to be available whenever they want to see them.

“Time-shifting viewing is a growing fact of life for networks, and honestly there’s little that can really be done about it,” said DePauw’s McCall. “Quality shows will still get eyeballs, and the great shows have a better shot at getting real-time viewing.”

Because the airwaves are still regarded as a public resource, broadcast is also bound by federal regulations and content restrictions that cable networks and streaming outlets can ignore. No matter how shrewdly ABC makes and markets its new biblical epic “Of Kings and Prophets,” it will never offer the graphic sex and eye-popping violence of HBO’s fantasy smash “Game of Thrones.”

But a pair of longtime broadcast hits that once drew huge audiences are now headed for retirement. That includes CBS’ “CSI: Crime Scene Investigation,” the worldwide smash that spawned a fad for forensic dramas, and “American Idol,” Fox’s singing contest that ushered in a wave of competition reality shows. Both will end in 2016.

For next season, the networks also look to be weeding out some of the younger shows that just weren’t distinguishing themselves in ratings or critical acclaim — such as NBC’s sitcom “Marry Me” or CBS’ procedural “Stalker” — while protecting those series that can deliver a return, in delayed viewing if not immediately. (Shows also tend to last longer if the network and studio are in the same corporate family, a fact that may have played a role in the demise after three seasons of Fox’s thriller “The Following,” which is produced by Warner Bros. Television.)

With its ongoing status as the most-watched network, CBS can afford to be circumspect. Its biggest play is “Supergirl,” a trailer for which was received warmly by media buyers at a presentation in New York this week. The show is a bid for a somewhat younger demographic than the over-50s whom CBS typically attracts, as is “Limitless,” which is adapted from the 2011 feature starring Bradley Cooper (who is producing and will appear in some episodes).

“The idea of the old-fogy network really should be put away forever,” CBS boss Leslie Moonves told reporters hours before the network formally presented the lineup to advertisers.

Fourth-ranked Fox, meanwhile, is in the midst of reinvention.

“Fox won’t seem like Fox without ‘American Idol,’” McCall said. “But ‘AI’ wasn’t its old self anymore and did need to be retired.” Fan favorite sitcom “The Mindy Project” was also sent packing. New series include an adaptation of the sci-fi thriller “Minority Report” and “Scream Queens,” the latest from “Glee” overseer Ryan Murphy.

The network is pinning much of its hopes on “Empire,” the hip-hop soap that was a surprise smash earlier this year and will return on Wednesday nights.

“Did (Fox) mention that at their presentation?” ABC host Jimmy Kimmel cracked to advertisers on Tuesday.

NBC, which ranked first in the key demographic of adults aged 18 to 49, will get its usual boost from Sunday NFL games in the fall (the Summer Olympics in Rio de Janeiro won’t arrive until September 2016). The network will try to revive a potential franchise with “Heroes Reborn.”

But much of its presentation this week was devoted to special events, including Neil Patrick Harris headlining a limited variety series, a genre NBC has tried many times previously with spotty success. NBC chief Bob Greenblatt indulged his showman side by providing piano accompaniment for Parton as she promoted her movie event. The country superstar sang one of her signature tunes, “I Will Always Love You.”

As they confront a season light on comedy and heavy on the familiar, Greenblatt and rivals have to be hoping that viewers will sing the same song about the networks that have kept Americans entertained for the last 65 years.