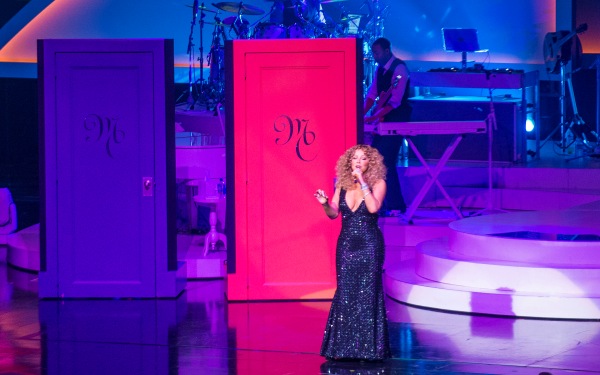 Singer Mariah Carey performs during the launch of her residency 'MARIAH 1 TO INFINITY' at The Colosseum at Caesars Palace on May 6, 2015 in Las Vegas, Nev.
(Credit: Kobby Dagan/Abaca Press/TNS)

LAS VEGAS — Mariah Carey said she’s happy. She asked if that sounds like a cliche, but given the roller-coaster few years she’s had, it shouldn’t.

We’ve all seen the headlines. Her marriage to Nick Cannon, father of Carey’s twins, Monroe and Moroccan, ended after six years. An accident on the set of a 2013 music video left her with a dislocated shoulder and required a lengthy recovery. And her 2013 stint as a judge on “American Idol” is mostly remembered for a spat with her onetime collaborator Nicki Minaj that went viral.

On top of all that, her last album, “Me. I Am Mariah ... the Elusive Chanteuse,” was hampered by delays and ultimately opened with weak sales. But here she was, wearing tight black jeans, bedazzling jacket and towering heels and cheerfully sipping a glass of wine — in a festive mood, as she put it.

The night before, the 45-year-old star’s new residency, “Mariah #1 to Infinity,” opened to a sellout crowd in the Colosseum at Caesars Palace. “We were told, in no uncertain terms, that it was one of the best — if not the best — show openings Las Vegas has ever had,” beamed Carey’s manager, Stella Bulochnikov, clinking wineglasses with the singer.

The show, directed by longtime Grammy producer Ken Ehrlich, is a greatest-hits parade, with Carey performing her 18 No.1 hits in the order of their release. So far, only the first 18 shows have been announced, but sources said the show could go through the end of the year. How has she celebrated?

“I slept a lot,” Carey said with a laugh. “Last night I was with a few friends. We ended up watching ‘Gentlemen Prefer Blondes,’ and just for a moment we were living in the splendor. Oh, and we went in the hot tub. This is Mimi (a nickname for Carey) after the show!”

For Carey, the residency is not so much a push of the reset button as a look to the past while keeping an eye on the future.

Carey has reunited with Antonio “L.A.” Reid, who oversaw her blockbuster 2005 comeback, “The Emancipation of Mimi.” Her first issue on her new home, Epic Records, is a hits compilation, “Mariah Carey #1 to Infinity.”

Miles away from the touristy buzz of the Las Vegas Strip, past multiple security gates, Carey was unwinding in her Summerlin, Nev., home. Dozens of photos lined a marble countertop between the kitchen and a sleek bar — most were of her children’s smiling faces, but there were also shots of Carey on the beach or with friends.

In one, she’s embracing longtime friend and collaborator Brett Ratner, who would be in town the following day to direct her video, “Infinity,” inside a lavish Caesars Palace penthouse.

The sounds of Carey’s 4-year-old children playing upstairs echoed throughout the home as members of Team MC tended to business around the room on smartphones and laptops. Later, her kids trotted downstairs for dinner, gleefully shouting “Mommy” and slapping high-fives with everyone, Rocco’s curly hair bouncing as he jumped about, and Monroe, as stylish as her mother, twirling in a dress covered with Disney princesses.

As Carey’s trainer prepared dinner — grilled chicken and steamed asparagus — the singer discussed her new show and her latest chapter.

— What felt right about doing a Vegas stint now?

I guess it was because the theater, dahling — the theater became available (laughs).... But what felt right about the timing was I was transitioning from one label to the next. And I had the babies, and I tend to travel with them, and to go and start recording from scratch right now would be great, but there’s a house I’m working on right now that I want to finish so I can record there and they can have their own area. They dictate what happens with my life, so I thought this would be good.

— Was it always this concept, of strictly doing the No.1s?

I think any Vegas residency should be the No.1s, because most of the people coming to see you, most of them don’t know the album cuts that the fans know. If I were to do a show of my favorite songs for the fans, which I will do one day, it would be a more intimate setting. Doing the songs in chronological order is kind of interesting. You’ve got little young kids in the front row and they don’t know this song, but maybe they know this one. Through the miracle of technology they’ve gone and discovered.

— Did it present any challenges? It’s a set structure to have to build a show around.

It was a challenge to say, “OK, I’ve got a group of up-tempos, midtempos, ballads, etc., and how are we gonna do this (structurally)?” Ken wanted to mix it up. I don’t think he wanted to go chronologically. I think he felt most people didn’t do well with that. But I said, “This is the way it happened. This is the way my life played, this was the soundtrack,” and I felt like we could make it work with interludes connecting the dots musically.

— Are you going to stick to the show’s concept?

If I notice a lot of the same people (traveling) to see the shows, I’ll see if I can slip in a fan favorite. But I need to get this show where it is, and then maybe we’ll take a space where, if it feels good that night, I’ll do such-and-such.

— What is this time like for you? New label, a lot of changes going on in your life.

Well, L.A. Reid is everything. I felt really abandoned by him. I was lost. I really didn’t like being at a place without a family. You’ve gotta have people that actually care about you as an artist, that’s first and foremost, and as a person as well. That’s what you get with him. I was kind of like floundering, doing some work that I’m still really proud of.

— You certainly haven’t been immune to criticism. How do you deal with headlines and rumors?

I didn’t know people would be talking about me the way that they do. Honestly, everybody gets talked about. Some people control their press a little more than others. Some people feed the press and move it the way they want to. I don’t do that. If something (negative) happens, it happens. If I’m in an upswing, that’s great. If people feel like riding my bandwagon, that’s great.

Even if they hate me or are hating on me, it’s not going to kill my spirit. I’m not going to allow that to happen. I’ve been through a lot of ups and downs and situations that could have been avoided. I can only look forward.

The other night I was watching YouTube and I just let it roll and wound up on a few old Larry King interviews and other things and I said, “Wow, they were so fascinated by this at that moment.” But who cares? I don’t know, I guess some people do. I should be flattered. I’m going to take it as a compliment. Patti LaBelle told me to take it as a compliment so I’m gonna do that.

— Any plans to get back in the studio soon?

Yes, we do. L.A. Reid and myself, we’re going to go in and go hard and think about the best move for the next record. And we’ll see. But the last thing I’m going to do is give away more intellectual property. I’ve literally been robbed. I had an idea for something and someone took the exact same thing, and that was a little unnerving.

I can’t tell you because it’s too big a scandal. The person literally lifted the entire concept, and the title, and the visuals. I just couldn’t believe. But it’s OK, it wasn’t meant to be, obviously. Or maybe it’s meant to be again under a new headline.

— What about outside the music, are you doing any more acting?

I am. There’s some other things on my horizon. Lee Daniels has promised me several roles soon and (sings) “I will hunt him down” if he doesn’t.

I wanted to give them a song. I thought one of these songs could be good really good for (characters) Cookie or Luscious. I have a song that I wrote with Big Jim (Wright) and Jermaine (Dupri), and I think it could be really right for the show. But Lee wants me to do a character, that’s what he says. But we’ll see what he does with next season.

— Anything else in store that you’re excited about?

This is just the beginning. The show is never going to be the same. So there’s that. Movies. Projects that I’m developing, there’s some TV projects and different concepts.

Christmas is always the most fun. I start looking forward to Christmas before it’s even summertime. I did those shows at the Beacon Theater. I’ll be doing that again this year. And I’m going to have some other surprises that I will announce later.

— If you had to define this time in your life in one word ...

Happiness..... It’s very hard to come by. There are other aspects to it. It’s the first thing that popped into my head. Is that too corny?