Lakers thrilled to finish No. 2 as balls fall in NBA draft lottery 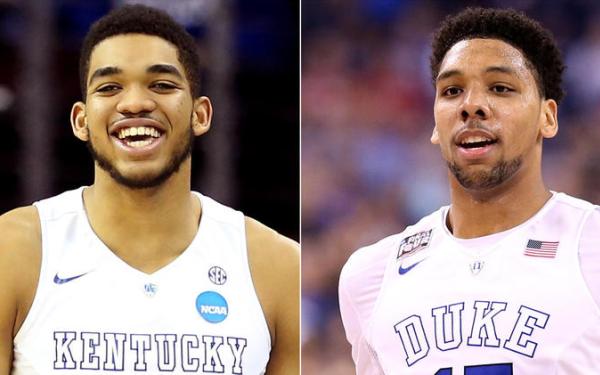 The most backward of all Lakers seasons appropriately ended Tuesday with the most unique of giddy chants.

For a franchise that bases its entire self-worth on championships, never before has finishing second felt so much like winning. The magic they haven't been able to summon with a basketball just happened with four ping-pong balls. The seven months worth of beatings they just endured have ended with them standing and grinning.

For an upcoming NBA draft that has exactly two potential franchise-changing 6-foot-11 stars, the Lakers were awarded the second pick Tuesday, jumping up from their designated fourth spot in the draft lottery, moving behind the top-picking Minnesota Timberwolves and into the sort of bright hopefulness they haven't felt in the two years since Kobe Bryant felt his foot pop.

Jahlil Okafor or Karl-Anthony Towns, who ya got?

As quick as Byron Scott's celebratory wink on the nationally televised lottery show from New York's Hilton Midtown hotel, a night that could have ruined next season potentially rescued their immediate future. They not only escaped the tanking clutches of the Philadelphia 76ers but leaped over the Sixers and New York Knicks and into the belief their recent string of bad luck is finally changing.

There was a 17% chance they could have fallen out of the top five spots and been forced to give the pick to Philadelphia as a convoluted result of the Steve Nash trade. Nightmare avoided.

There was just a 12% chance that they could move up to the No. 2 spot. Odds beaten.

After ranking 25th in the league in shooting this season, they finally hit on a long shot, lighting up everyone in Laker nation with thoughts of a return to relevancy with a future lineup featuring a farewell-bidding Bryant and a high-priced free agent — they can afford one finally! — guiding star kid Jordan Clarkson, healthy returning rookie Julius Randle, and one of those two big men.

The offensive threat from Duke or the defender from Kentucky, who ya got?

Of course, leave it to Bryant to provide some perspective, as he tweeted, "We played like crap all season so its only right we get the #2 pick HA."

Indeed, all those Lakers fans who have been pretty much partying nonstop since the collapse of the Clippers on Sunday could use a bit of a reality check here. Those Clippers are still the stable NBA franchise in town right now. Those Clippers still aren't the ones desperate for a teenager to bail them out.

The Lakers still won just 21 games last season, making it officially the worst team in the franchise's 67-year history. The Lakers still don't know much Bryant has left, or how well Randle will recover from his broken leg, or whether Clarkson's great rookie finish with no pressure is just a mirage.

And, oh yeah, the Lakers basketball operations are still run by Jim Buss. The last time somebody trusted him with something this important, he blew off Phil Jackson and showed up with Mike D'Antoni. Who's to say he won't snub one of the big men — the most rare and coveted asset in today's NBA — and show up with some lanky guard who gave a good pre-draft interview?

In April of 2014, Buss told the Times' Mike Bresnahan he would step away if the team is not "contending for a championship" in "three to four years." That could make this draft one of the most important moments of Buss' tenure, the good news being, the moment is really a no-brainer. Just wait for Minnesota to pick one of the big dudes, and then pick the other one.

The kid from the national championship team, or the kid whose team won 38 straight games, who ya got?

Whoever they take could change everything. Big men do that. Big men especially do that when they join the Lakers, from Wilt to Kareem to Shaq. The combination of giant size and smart athleticism is so rare in today's NBA, franchise's entire fortunes can change with its arrival; just look what happened in New Orleans since Anthony Davis showed up in 2012. Many folks with the Clippers believe the most important day in their franchise history wasn't the acquisition of tiny Chris Paul, but the drafting of big No.-1-overall pick Blake Griffin in 2009, and it's hard to argue with them.

Then again, big men have also been the draft's biggest busts, from Portland's Greg Oden in 2007 to Washington's Kwame Brown in 2001, but that's a chance the Lakers have to take.

Rim protector? They need one. Last season they finished 29th out of 30 NBA teams in points allowed per game (105) and opponents' field-goal percentage (47) while playing in stretches in which the opponents simply appeared to run a layup line.

Rebounder? They need one, as their leaders last year were Jordan Hill and Ed Davis.

Meeting with reporters after the lottery, Scott, who looked sharp in his bright gold tie as the Lakers representative, couldn't hide his smiles even as he cautioned patience.

"I can't say it's a way to announce we're back," said the coach. But "I think we're on the right track."

You think? For the record, the numbers on the four ping-pong balls that gave the Lakers the second pick were 6-8-4-11.

Go ahead, take those digits to the mini-mart this week and use them to play the lottery. You might win. The Lakers just did.