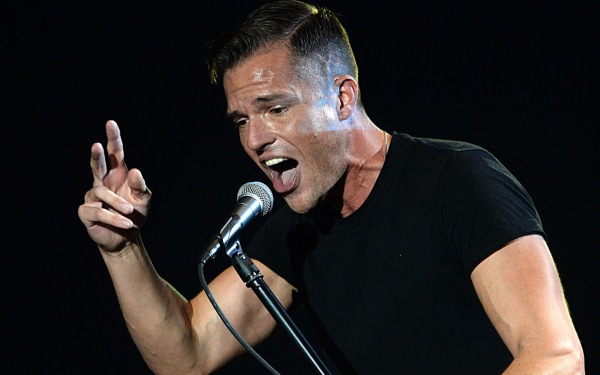 Brandon Flowers of The Killers performs on stage during the 2013 MTV Europe Music Awards at the Ziggo Dome on Nov. 10, 2013 in Amsterdam, the Netherlands.
(Credit: Doug Peters/Abaca Press/TNS)

Here’s one way to win Brandon Flowers’ confidence: Tell him you like a song of his that nobody else likes.

That’s what Ariel Rechtshaid did when the Killers frontman, on the hunt for a producer for his second solo album, played Rechtshaid a demo of “Still Want You,” which Flowers had originally written for his main band’s 2012 record “Battle Born.”

“I was kind of reluctant to play it,” the singer recalled recently, adding that “Still Want You” — a deeply earnest tune about holding on to love in the face of “climate change” and “nuclear distress” — had been received less than warmly by those who’d heard it, including his Killers bandmates. “But Ariel loved it right away.”

For Flowers, 33, that was a sign that the producer known for his inventive work with Vampire Weekend and the Los Angeles sister trio Haim was the right guy to partner with for his new album, “The Desired Effect,” no small thing given that Rechtshaid came from outside Flowers’ trusted circle. With the Killers and on his 2010 solo debut, “Flamingo,” the singer has collaborated with the likes of Daniel Lanois, Flood and Steve Lillywhite, all high-profile veterans of U2’s late-‘80s/early-‘90s era.

The change in personnel inspired a welcome creative shift: Rather than build on Flowers’ reputation for sweeping, ultra-dramatic arena rock, “The Desired Effect” (which came out Monday) goes smaller and more personal, with weirder, funkier arrangements and lyrics that reflect his upbringing as a Mormon in Las Vegas and his life as the married father of three young children.

“I think Brandon had reached a natural arc in what he was doing and needed something different,” said Rechtshaid. “My deal was, ‘Let’s try to make the world know who you really are.’”

Over a tight groove punctuated by horns in opener “Dreams Come True,” Flowers describes being tantalized as a kid by “promises and visions of a country unseen.” The winsome “Lonely Town” considers “life without you around.” And then there’s “The Way It’s Always Been,” in which the singer ponders the constant churn of renewal that defines his hometown as a minimal machine beat keeping time.

“It’s not as grandiose as some of the stuff I’ve gone for before,” the singer said in West Hollywood before an appearance on “The Late Late Show With James Corden.” Which isn’t to say that he and Rechtshaid, who split recording sessions between L.A. and Las Vegas, resisted the urge to follow their impulses.

Among the musicians featured on the album are Kenny Aronoff, known for his drumming on John Mellencamp’s early-‘80s hits, and pianist Bruce Hornsby, who lends his signature sound to two tracks.

In the studio, Rechtshaid said, he and Flowers found themselves “going for a Hornsby vibe” but they couldn’t quite get there on their own. “So we were like, ‘Why not just reach out to him?’”

“In my experience it’s pretty bulletproof, just calling people,” said Flowers, who added that he employed the same approach to get Neil Tennant of the Pet Shop Boys to appear on “I Can Change.” “You don’t think they’re going to say yes. Ever. But I think they appreciate that there are people who admire their work.”

Record-nerd catnip though they may be, these cameos weren’t about exploiting name brands, Rechtshaid insisted, but attaining a level of sonic legitimacy to match the “realness” of Flowers’ lyrics. “I didn’t want an imitation,” said the producer, and indeed there’s a specificity to many of the sounds on “The Desired Effect” that elevates the music above the shallow ‘80s-pop pastiche it might’ve been.

When Hornsby’s distinctive piano ripples through “Between Me and You,” which also features Tony Levin on the bass-like Chapman stick, it’s not taking you out of the moment; it’s boosting the emotion of a song about a family man’s struggle to stay connected.

One part of that struggle of course is the touring commitments that will keep Flowers away from home until the fall. “Flamingo” performed less successfully than many expected, as did the Killers’ “Battle Born,” which might be why Flowers seems to be stepping on the gas behind “The Desired Effect.” “I feel like I’m going for it a little bit more,” he said, citing a promotional push that helped drive the album to the top 10 of the iTunes chart this week.

For an artist famous for conveying a larger-than-life aesthetic, Flowers is remarkably unruffled by the challenge of adapting the album’s relatively intimate songs to the stage.

“A good song is a good song, and a small song can become a big song,” he said. “I’m so used to having these giant choruses and kind of going for it. But I feel like something like ‘Lonely Town’ could translate in a big arena.”

Then again, the Brandon Flowers road show is considerably more compact than the Killers’. In recent years the band has played Staples Center and the Hollywood Bowl, but when Flowers’ solo tour reaches L.A. in September, he’ll be at the Wiltern.

“Yeah, that’s hard on my ego,” he said with a laugh. “No, it’s fine. It wasn’t that long ago that the Killers were in clubs. I like big stages, it’s true — I like to spread my wings.