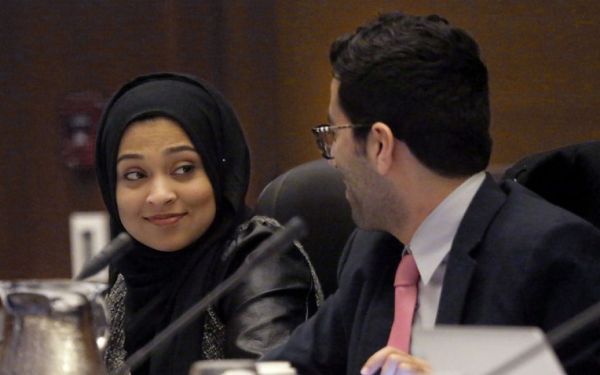 More than a dozen Jewish alumni and others citing an escalation of anti-Semitic acts across University of California campuses presented the regents with nearly 700 signatures Wednesday urging them to adopt the U.S. State Department’s definition of anti-Semitism.

Just one speaker, a Jewish woman, echoed pro-Palestinian groups that say defining anti-Semitism would repress criticism of Israel on campuses. But those calling for UC to adopt the definition said it would help clarify the difference between legitimate protest of Israeli policies and outright anti-Semitism.

“We are urging you to address anti-Semitism with the same vigor as you do all other forms of bigotry,” said Tammi Rossman-Benjamin, a UC Santa Cruz lecturer who co-founded Amcha, a coalition of Jewish groups that collected 683 signatures. Its name is Hebrew for “your people,” and the group says it exists to combat anti-Semitism in higher education.

No students addressed the regents on the issue. Clashes over Israel and anti-Semitism are increasingly common at UC and campuses across the country as calls for universities to boycott, sanction and divest from Israel have grown in popularity. The animosity also made its way to regents meetings in recent years, when anti-Israel activist Sadia Saifuddin and pro-Israel activist Avi Oved were selected as student regents. Saifuddin is about to complete her year on the board, and Oved, who has served as the non-voting student regent-designate, will take her place this summer.

The regents have no official definition of anti-Semitism, but do have a policy protecting free speech. Regents Chairman Bruce Varner and UC President Janet Napolitano have condemned bigotry.

On Wednesday, speakers cited recent anti-Jewish graffiti, flyers and intimidation on five UC campuses. Their petitions, signed by alumni, professors and rabbis, asked the regents to end the debate over what constitutes anti-Semitism by adopting the State Department’s definition. It begins: “Anti-Semitism is a certain perception of Jews, which may be expressed as hatred toward Jews.” The State Department also offers examples of anti-Semitism, including denying Israel the right to exist and comparing Israeli policies to those of the Nazis. In Sacramento, a bill pending before the Assembly, SCR35, would call on UC to adopt the definition.

Cindy Shamban, the only speaker who opposed adopting the definition, said, it would “silence legitimate criticisms of Israel by codifying” such criticism as anti-Semitic.

The other speakers said they favor the right to criticize Israel, but not when it’s used as code for anti-Jewish actions.

“People of good faith can disagree on the Israeli-Palestinian issue, and we are not advocating for a silencing of free speech,” says one petition signed by 104 UC faculty members. “However, opposition to Israel’s policies or actions is no excuse to cross the line into Jew hatred.”

•UC Berkeley: “Zionists should be sent to the gas chamber” was found on a bathroom wall March 2 after an anti-Israel protest.

•UCLA: Four student senators who sponsored a successful divestment resolution argued in February that a candidate for a student board was ineligible because she was Jewish. She was rejected in one vote and accepted in a second after a professor intervened.

•UC Santa Cruz: A Hillel-sponsored event had to be moved on Jan. 27 after anti-Israel faculty and students threatened to drown out speakers and shut it down.

•UC Davis: “Grout out the Jews” was scrawled on the campus’ Hillel House in late January before a student vote urging UC to divest from companies doing business with Israel. Swastikas were painted on a Jewish fraternity after the vote.

Napolitano has said the issue “should be addressed,” a UC spokeswoman said.