Jon Bon Jovi wrote a song for Rutgers' class of 2015 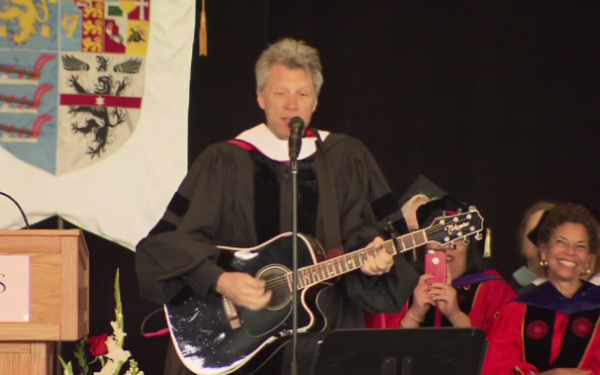 As more than 1,700 students at Rutgers-Camden graduated Thursday, a civil rights lawyer encouraged them to change the world while a rock star urged them to "touch the sky."

After a passionate speech from Bryan Stevenson, founder of the Equal Justice Initiative in Montgomery, Ala., on working for justice in America, the 1,749 graduating students heard a speech and surprise performance from native New Jersey rocker Jon Bon Jovi.

"Love your life / learn to laugh / dare to dance / touch the sky," Bon Jovi sang during the performance of a song he wrote for the occasion. "Take pictures each step of the way / Make this the best of the rest of your days / Go start your revolution / And I'll see you at the reunion."

"Your name is synonymous with energy, aspiration, and optimism," Haddon told Bon Jovi during the commencement ceremony at the Susquehanna Bank Center in Camden.

In Camden, the musician's philanthropic work has included supporting the Joseph's House homeless shelter and other groups.

Bon Jovi encouraged students to be flexible in their lives, open to new opportunities.

That echoed remarks from Stevenson, who urged the students to be wiling to get uncomfortable and close to things they care about in order to effect change.

Having grown up in segregation - attending a "colored school," Stevenson told the graduates, he graduated from Harvard Law School and began a law career that has included efforts to clear innocent death row prisoners and arguing cases before the U.S. Supreme Court.

At a time when issues of race, justice, poverty, and equality, are at the forefront of a national conversation, Stevenson's remarks appeared to resonate with the crowd, which applauded him at several points. Civic engagement has long been an important part of Rutgers-Camden's mission, Stevenson noted.

And then, in a passionate address, Stevenson called for a better understanding of racial issues in America.

"I believe we need to change the narrative about race. This country has never dealt with its history of racial inequality," he said. "I believe we actually have to talk about slavery in America, because we've never had that conversation.

"I don't believe that slavery ended in 1865, I think it just evolved. It turned into decades of violence and terror," he said.

But Stevenson was hopeful, and his message to graduates, who have spent years studying and learning in the City of Camden, was that they could change the world they were entering.

"I believe that hope is the friend of justice. I also believe that injustice prevails where hopelessness persists," Stevenson said. "Hope is essential to changing the world."

And that would require doing things that will make the graduates uncomfortable, Stevenson said, but it will be worth it.

"I am so excited, not only about what I believe you're going to do, but also what you represent," he said. "I wish you all the best in changing the world. Good luck to you all."