U2 aims for intimacy, presence in latest tour 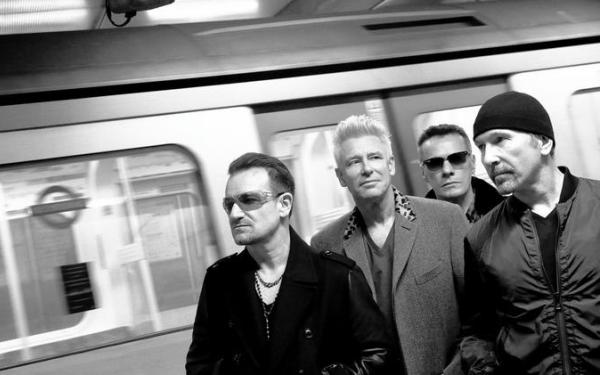 For U2, the lightbulb moment came in the form of an actual lightbulb.

Brainstorming two years ago for a newly launched arena tour that stopped at the SAP Center here last week and will move onto the Forum for five nights starting Tuesday, the members of this venerable Irish band hit upon the idea of a stage illuminated by a single naked bulb. The image evoked Bono's childhood bedroom in Dublin, where the frontman learned to play music, and it inspired the design of a relatively small-scale show that conjures the earnest but scrappy spirit of U2's early days.

The group's capabilities — and its ambitions — have grown since then, of course: Not long after it opens under that swinging bulb, the concert expands to incorporate two additional stages and a billboard-sized screen flashing state-of-the-art visuals; the sound system, with speakers facing down from the ceiling, is another technological advancement. Yet the production, called the Innocence and Experience tour, shares an up-close intimacy with "Songs of Innocence," the proudly autobiographical album U2 released last year.

"What we're trying to communicate is a kind of emotional outpouring, of lives that we've lived in the past and look forward to in the future," Bono said. "We really want people to connect to the band's performance."

The tour also gives U2 the opportunity to publicly reposition after its deal with Apple, which put "Songs of Innocence" in the iTunes libraries of an estimated half-billion people and led to a backlash among users who viewed the stunt as an invasion of their digital privacy. Bono later apologized — well, sort of — on Facebook, acknowledging that a "drop of megalomania" had driven the band, along with a "deep fear that these songs that we poured our life into over the last few years mightn't be heard."

But the apology failed to combat a widening perception that U2, the once-punky outfit that put out its first album in 1980, had gotten too big, too cocky, too sure of its own importance. This tour, in telling contrast to the massive stadium outing that brought U2 to the Rose Bowl in 2009, seeks to correct that impression or at least to emphasize a different, more personal side of the group.

Gathered with his longtime bandmates — bassist Adam Clayton, drummer Larry Mullen Jr. and guitarist the Edge — in a penthouse hotel suite the day after the SAP Center gig, Bono challenged the notion that the new show represented an attempt at damage control.

"There's a point to the intimacy," he said, his face bearing no visible mark of a bicycle accident that fractured his eye socket in November. "We have a tale we want to tell, and that is: What makes a person an artist? Why do you want to be in a band?"

In the concert, U2 performs amid video that reflects some of the formative incidents of Bono's adolescence, including the political violence that ravaged Ireland in the 1970s and the death of his mother when the singer was 14. The show also contains sonic and visual references to the music that influenced U2: Kraftwerk, the Ramones, Johnny Cash.

Like "Songs of Innocence" — which explicitly looks back on the band's beginnings in tunes such as "Iris (Hold Me Close)," titled after Bono's mother, and "Cedarwood Road," the street he grew up on — the Innocence and Experience show argues that U2 hasn't lost touch with those animating forces.

"Irrespective of how this record was released, we would be touring it. We'd be playing the songs," Mullen said. "That's what we do."

Still, the musicians acknowledge that the concerts do offer a chance to reintroduce their new album. Despite its high-profile release, "Songs of Innocence" didn't make the kind of impact U2 is accustomed to making; the music seemed to slip out of the cultural conversation with a speed all the more remarkable given the band's recruitment of young writer-producers such as Ryan Tedder and Paul Epworth, who've worked with Beyoncé and Adele.

Part of the problem was Bono's accident, which forced the band to scrap promotional plans including a weeklong stint on "The Tonight Show Starring Jimmy Fallon" and a highly publicized appearance at KROQ-FM's Almost Acoustic Christmas concert in December. (As a kind of make-good to the powerful L.A. radio station, U2 will play a KROQ-sponsored show at the Roxy on Thursday night.)

Nearly nine months after the album came out, though, it also seems clear that "Songs of Innocence" was poorly served by its out-of-nowhere arrival. Sure, the record has its share of immediate moments, none more in-your-face than its whoa-oh-oh-filled opener, "The Miracle (of Joey Ramone)," which U2 also used to open its show at the SAP Center. But much of the material — the dreamy "Every Breaking Wave" and "Song for Someone," with a stately march beat — reveals itself more slowly. It needs the kind of time many iTunes users weren't willing to dedicate to the album.

"We build our songs so they don't get worn out quickly," the Edge said, "and often, that means that they take a little longer to connect." The tour, he continued, "is a way for us to get under the skin of the songs."

The band is just figuring out now what it's got, said Bono, who added that performing a song "in front of a crowd of people lets you know really quickly if it lands or not. And we've got a lot of songs that land. So the new ones had better."

Indeed, oldies like "With or Without You" and "Where the Streets Have No Name" inspired the usual singalongs in San Jose. But so too did "Every Breaking Wave" and "Iris," the latter of which Bono dedicated to Sheryl Sandberg, the author and Facebook executive whose husband, Dave Goldberg, died unexpectedly this month.

That wasn't U2's only nod to the technology world in which it's increasingly sought to become a player. Later in the show, while he was encouraging donations to his AIDS prevention and treatment organization Red, Bono described Bill Gates as "the most profound influence on my life as an activist." And for "The Sweetest Thing" the frontman invited a woman onstage to shoot the band's performance for the live-streaming service Meerkat. Alas, it didn't quite work.

"Talk about embarrassing," Bono said the next day with a laugh. "We're in Silicon Valley and you can't even get Wi-Fi in the building."