Volunteers will be trained to help with oil spill 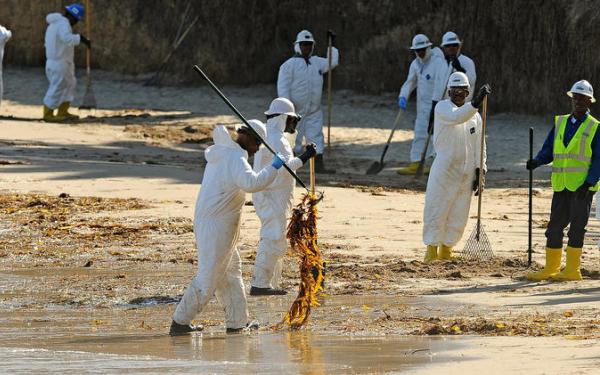 White-suited workers clean up oil from Refugio State Beach, five days after a pipeline rupture sent thousands of gallons of crude into the ocean.
(Credit: Christina House / For The Times)

After days of turning away members of the public looking to help clean up in the aftermath of a large oil spill along the Santa Barbara coast last week, officials will begin training volunteers to assist in the response Monday.

Volunteers can register for training sessions online and must at least 18 and in good health.

Officials with the state Department of Fish and Wildlife’s Office of Spill Prevention and Response are looking for volunteers with a range of skills, including animal training, data entry, logistics and construction.

A pipeline owned by Plains All American Pipeline ruptured Tuesday and sent up to 101,000 gallons of crude oil into a field. About 21,000 gallons made its way down a storm culvert and into the ocean.

Cleanup efforts have ramped up since the spill, with more than 650 trained working over the weekend. Members of the public have been clamoring to help out but have been turned away in droves.

State and federal officials have warned that working near crude oil can be dangerous for untrained workers.

Inhaling oil fumes can cause headaches, vomiting, confusion and respiratory difficulties, among other problems.

Workers heading onto oiled beaches like El Capitan, for example, are required to duct tape rubberized covers over their shoes and strip off contaminated coveralls before coming onto land.

“We do understand that people feel very fervently and very strongly about trying to help out with the response,” said Yvonne Addassi, deputy administrator of the Office of Oil Spill Prevention and Response at the California Department of Fish and Wildlife. “Oil is a hazardous substance. So you need to be careful. You need to be able to be properly trained. You need to understand what the hazards and risks are.”

Those warnings haven't prevented a slew of volunteers from picking up shovels and buckets and heading to beaches throughout Santa Barbara County.

Two high school students from Santa Clarita, Dana Bowers and Kayla Yonkers, said they were turned away from Refugio State Beach and El Capitan State Beach on Saturday before they headed south to Haskell's equipped with rubber boots, gloves, buckets and trash bags.

The teens said that as they picked globs of oil off the sand and rocks Saturday, they were repeatedly approached by officials who told them it wasn’t safe for them to work there.

Yet children continued to play nearby and some people were venturing into the waves, they said.

"They didn't tell them to get out of the water," Bowers said.

As of Sunday, workers had collected more than 1,400 cubic yards of oiled soil, sand, and vegetation as well as 9,492 gallons of oily water. But officials say there is much more to be done and that workers will be out at the site for weeks.

The cleanup has continued over the holiday weekend.

Workers along the coast finished emptying oil from the affected part of the broken pipeline on Sunday. About 21,000 gallons of oil was cleared from the pipe and the estimate for the maximum number of gallons spilled has been revised down slightly from 105,000 to 101,000, said Rick McMichael, director of pipeline operations for Plains All American Pipeline.

Workers are now preparing to extract the ruptured section of pipe this week and send it for metallurgical testing to determine what condition the pipe had been in when it burst.

For the latest on the oil spill follow @jpanzar and @LATimesEmily