College students with nowhere to go 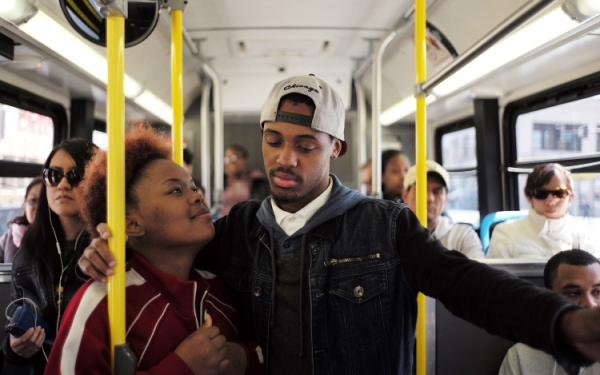 College student Malachi Hoye, 20, rides a bus with his girlfriend Jasmine Holt-Shirley, 18, on Wednesday, May 13, 2015, in the Logan Square neighborhood of Chicago.
(Credit: Anthony Souffle/Chicago Tribune/TNS)

CHICAGO — This month, with a mix of anxiety and exhilaration, college students across the country took their final exams, and then packed their bags for home.

It’s a little different for undergraduates Malachi Hoye and Caprice Manny. They don’t have homes to return to — at least not in the traditional sense. Hoye and Manny are among the estimated 56,000 college students nationwide who are considered homeless.

Such young people are a somewhat broadly defined population that experts say is underreported and expected to grow. But efforts to accommodate homeless college students are relatively new and fragmented. Schools, the federal government, a fledgling national organization and a pilot project by a Chicago nonprofit — are among those trying to solve a complicated challenge.

“I don’t have any trust fund anywhere. I don’t have any backup money,” Manny, 21, said in an apartment where the nonprofit, La Casa Norte, placed her in March. “I don’t have anything from any outside sources. It literally is just me. So, if I don’t get my crap together, I am just going to be out there.”

Manny, who finished her second year at Truman College this month, for years had bounced from the homes of sisters, grandparents and friends, as well as a couple of long-term housing centers, after leaving her mother’s home in 2011. She called the rent-free living program “a blessing” that let her focus on 12 credit hours of classes, which met Monday through Thursday at Truman, and juggle jobs at Starbucks, Walgreens and Bath & Body Works.

For students like Manny, homelessness is a circumstance, not an identity or “DNA makeup,” said Sol Flores, executive director of La Casa Norte.

“Their coping and resiliency skills — their bounce-back — are amazing,” she said. “There is still so much more to do, but it is such an opportunity. Not that we owe it to them; we owe it to ourselves.”

Before a federal student aid law enacted in 2009 gave financial aid administrators a specific definition of homelessness, it was difficult for colleges and universities to identify and track homeless students, said Cyekeia Lee, director of higher education initiatives at the National Association for the Education of Homeless Children and Youth.

In recent years, however, that once-invisible population has come into focus.

For the 2013-14 school year, the most recent data available, 56,224 students were classified as homeless, according to federal financial aid records. A year earlier, the number was 60,000.

Homelessness on campuses carries nearly the same definition as it does anywhere else. It generally covers students living in temporary, unstable situations, including friends’ or relatives’ homes, cars, shelters, parks, abandoned buildings, motels or bus and train stations.

One factor contributing to homelessness on campuses is low-income high school students’ “laser focus” on going to college, said Shenay Bridges, assistant dean of students and community resources at DePaul University. They obtain enough financial aid to cover tuition, books and a few related costs, but fail to consider remaining expenses, including housing, she said.

“I think people get their heads focused on one plan, and when that plan doesn’t work out, they find themselves scrambling,” said Bridges, adding that the students lack fallback financial support. “Then they’re accumulating some debt, and it snowballs.”

La Casa Norte, a nonprofit started in 2002 to help youths and families confronting homelessness, takes a direct approach in its Youth in College program. The organization established it in 2014 with a $50,000 grant from the city of Chicago.

For years, case managers at La Casa Norte would emphasize education for teenagers who were receiving housing from the nonprofit and get them started in college, said Flores, the organization’s director. But when clients aged out of housing programs at 21, they needed to find a place to live, she said.. That predicament usually led the young people to quit school to find a job that covered housing costs, she said.

Youth in College — open to clients who have received services from La Casa Norte and who commit to a full-time college program — pays the rent on two apartments where six college students, including Manny, reside.

Administering the program has been difficult, Flores said.

The students have few family relationships, and the typical stresses of college life can trigger anguish that sends them into an emotional tailspin, she said. Two young people in the program have suffered mental breakdowns, she added.

“It’s hard,” she said. “We still continue to deal with their level of trauma.”

Hoye, 20, left his mother’s home in Chicago’s Austin neighborhood at 16 after another in a series of arguments with her, he said. Since then, he has stayed at friends’ homes, shelters, a hospital, apartments, a Columbia College Chicago dormitory and on the streets.

In March, he and his older brother began living rent-free at El Rescate, an independent living center in Humboldt Park run by the Puerto Rican Cultural Center.

Hoye said he wants to inspire his brother and disprove “my mother’s voice in my head telling me you’re not going to be (anything).”

Still, there are challenges.

Hoye, who is finishing his second year at Columbia, has about $9,000 in debt, he said. That debt was a major factor in his decision to leave school for now, said Hoye, who plans on paying down debt, finding an apartment and re-enrolling in college after he stabilizes his finances.

Until now he has managed to stay in school through federal grants, scholarships, state food aid and a job at a Dunkin’ Donuts, Hoye said.

“Ain’t nobody else out here doing anything for me and my brother,” he said. “If I don’t do it, I will be pushing a cart at the expressway, trying to look for change.”

Hoye can recall the moment he hit bottom.

In January 2012, he and his brother had left home, exhausted the hospitality of friends, were broke and spent part of the bitterly cold night sleeping next to a Metra station on the South Side. “It hit in my head,” Hoye said. “It was time for me to stop playing around, stop being a child. Now it was time to shift and I had to be the adult. So, that’s what I did.”

It took him more than a year, until he legally became an adult, to take full control of his life, Hoye said. He battled depression so powerful that he considered suicide, but his resolve had been forged.

Manny’s low point came after she and her mother were arguing so often in spring 2011 that Manny decided to leave, she recalled. Manny believed she was responsible for ruining the relationship with her mom and that she had “messed up” by leaving Simeon Career Academy, she said. After bouncing from one temporary living situation to another, she started to find stability in Job Corps, a federal education and job training program. She’s receiving federal grants to cover her educational costs at Truman, a community college in Uptown. But they don’t cover housing. Like Hoye, Manny’s motivation and resilience are based in the knowledge of what she’s been through and fear of what might happen.

“Every so often,” Manny said, “when I’m not doing what I’m supposed to do” for school and work, “I feel like I get these epiphanies, these flash-forwards, of what my life will be if I don’t get my crap together.”

She will be allowed to remain in the apartment this summer. If she resumes her full-time student class load in the fall, maintains a 2.0 grade-point average, refrains from unsafe behavior and communicates with her case manager, La Casa Norte will continue to pay her rent.

Advocates for the homeless are pressing for changes to help students like Hoye and Manny.

Federal proposals include charging in-state tuition to homeless and foster youths, giving them priority for federal work-study programs, finding housing for them during school breaks and requiring the Government Accountability Office to make recommendations on improving the educational performance of homeless students.

It also would help if every university and college created a single point of contact, a clearinghouse of services for homeless students that would make college easier to navigate, Lee said.

The National Association for the Education of Homeless Children and Youth is expanding a network of colleges that have specific programs to help homeless students, Lee said. About 350 schools in four states have single points of contact, Lee said; 150 other schools in at least nine states are receiving training in best practices to support homeless students, she added.

For Manny and Hoye, college has been a way to move to a more stable life with a better shot at success, even when they were unsure how they would get to college. They downplay the precariousness of their lives. To handle their hectic schedules, they say time management and an extensive knowledge of public transportation are key.

If Hoye can get back to school by paying down his debt and finding stable housing, he said he would continue studying music business and hopes to break into that field as an R&B singer and producer. Manny said she always has enjoyed writing and is planning to major in English after she completes her studies at Truman and enrolls at a four-year institution. But she is unsure where her major will lead.

Other than that, she said, she feels pretty settled.

“I’m not looking to make a lot of money,” Manny said. “I’m really just looking to be comfortable and have a life that I’m proud of and happy with.”