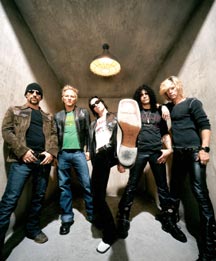 Slash, Duff McKagan and Matt Sorum from the legendary Guns N’ Roses knew they finally had a new band when singer Scott Weiland from Stone Temple Pilots "swaggered" into the studio last summer and "owned it." Along with fifth member Dave Kushner, formerly of Suicidal Tendencies, Velvet Revolver is now in the middle of their first tour, which sold out in minutes. Bassist Duff McKagan calls from the road to chat about their new album Contraband, his former days with Guns N’ Roses, and his thoughts on being tagged music’s new "supergroup."

Campus Circle (CC): On Contraband, the music balances between a classic rock sound and something new and fresh. Was this a conscious effort?

Duff McKagan (DM): I don’t think any of this was a conscious effort at all. The only thing conscious about us was, we didn’t want to sound like a rehash of Guns or a rehash of Stone Temple Pilots. There’re obviously gonna be some elements in there, but if we found ourselves falling into old habits, we’d catch ourselves and change it. We just kinda let it flow.

CC: I’ve heard you mention the "fuck you" element, your term for not buying into the music industry’s pressure to produce "formula" music, in Contraband. Is this element something you feel is missing from rock music today?

DM: Yeah, I think it stems really from the merging of all the huge media groups, which includes record companies, and how that filters down. Where I’m going at really are the stockholders, they need record companies to produce million-selling records. The way you do that is by formula and by being safe, and the bands turn out to be this generic, stamped-out kind of product. That’s what all these mega-mergers have done over the last 10 years and it’s kind of become the norm – these "normal," cookie-cutter bands. It’s unfortunate. There’s a whole generation of kids [and] that’s what they’re growing up to.

CC: "Superhuman," one of the standout songs on Contraband, has a real sexy feel, like you’re on edge. Did you use an alternate tuning for that effect?

DM: I love that song, yeah. It is a drop D tuning, and it just really started with Matt playing that drum beat, and I was in drop-D tuning and started playing, [then] Slash came in and that song just happened. It was written in about five minutes. It is very primal and very sexual; it’s a good song to, excuse my language … it’s a good song to fuck to.

CC: Your chemistry with Slash is well known. Is this something you can explain?

DM: No, it’s not. We never talk about it; it just metamorphoses itself. We just play off of each other. We found each other when we were both 19 years old and we’ve always had this link. We’re like brothers, we’re attached, and when we write songs, it just happens. We never say, "Hey, go to the A chord here," or "go to the D chord here."

CC: I wanted to talk a bit about your time with Guns N’ Roses. How did you feel when the band broke up?

DM: For me, I saw it withering. I felt it a long time before it actually happened so I was pretty prepared for it. I really look at [it as] the cup half full, that whole scenario, simply because it was five guys who believed in what we were doing and stuck to our path. We were very tenacious young guys and went from there to, at the end, playing stadiums. We went through a lot of stuff that only the five guys who originated from that band can really understand. I learned a lot and it was amazing – how it ended is kind of irrelevant. It’s the experience that really matters to me.

CC: What is the most important lesson you learned from being in Guns?

CC: And now you’re here with a slightly different lineup. You chose Scott Weiland over hundreds of other vocalists.

DM: Well Scott, just the way he swaggered into the room and kind of just owned it immediately. Again, I hate to overuse this word "chemistry," but he came in and sang, worked the melodies and lyrics, and it fit perfectly. It was effortless. We didn’t have to try to persuade him to sing some other way; he just fit like a glove. He’s pure rock ’n’ roll and that’s what we are. Maybe we all had to go through the things we went through to get to this point.

CC: Slash was the only one who’d never met Weiland. Was there a clash of egos?

DM: No, Slash doesn’t have an ego. He really never has. Slash and I just went around the world and did this press tour, just the two of us. We got to Europe, it was at the same time the Guns N’ Roses Greatest Hits came out over there. Both he and I were getting this "you guys are legends" thing and we were just looking at each other like, "No, we’re not!" We’ve never been like that. He doesn’t have an ego; he’s just a pure, pure musician.

CC: How do you feel about Velvet Revolver being tagged a "supergroup"?

DM: I don’t like it. I understand how it’s put out there and I understand why we would be labeled that, but I think, eventually – I hope eventually – that the label will disappear and we’ll just be taken for the band that we are.

CC: You guys give a lot during a live show. How do you keep up your stamina during a tour?

DM: You really feed a lot off of the audience in a live situation. That’s really why we’re the five perfect guys for the band, because we can keep it up like that. That’s kind of what we’re about, the energy, you know? I was just thinking about it the other day, you see some bands, and they just kind of stand there and do their thing. That’s cool for some bands to do, but for a lot of bands it’s not that cool, not that fun to watch. For us, it’s a lot more like a contact sport.

CC: A lot of bands cite Guns N’ Roses and STP as big influences. Who were yours?

DM: I’d say The Clash. I saw The Clash in ’79 when I was 13, one of the most amazing shows. Iggy Pop I saw in 1980 was a very influential show for me. Prince was probably a big influence. I could go on and on, [but] those were probably the three most influential shows that steered me toward my attitude toward rock ’n’ roll and how I approach songwriting.

CC: What are your favorite CDs of all time?

DM: Oh Jesus! You know, I’ve had to do lists before, which always kill me ’cause I always leave something out. Fun House by The Stooges is always a classic, great record; the Germs [GI] is a great record; Prince 1999, The Best of Sly & the Family Stone. I love the new Outkast record – I think that’s gonna be a classic record. Shit, I’m leaving tons of stuff out here. Aerosmith’s Toys in the Attic, great record.

CC: John Lennon once said that there’s nothing conceptually better than rock ’n’ roll. Do you agree?

DM: In a lot of ways, I think it is. In my 20s, I didn’t think it was that important, but it gives people hope. It gives them something to be passionate about – sometimes that’s all people have. And in dark times, that’s what gets you out of it.

Velvet Revolver’s Contraband is currently available. Velvet Revolver will be playing the Wiltern on June 9 and the KROQ Weenie Roast at the Verizon Wireless Amphitheater on June 12. For more information, visit velvetrevolver.net.