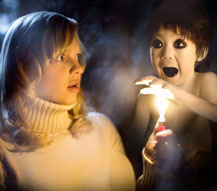 There were more than a few moments back five years ago when Anna Faris was ready to bid farewell to the Scary Movie franchise.

Scary Movie,” the Wayans brothers’ slasher parody, was a smash hit, but the hastily made Scary Movie 2 chilled that momentum in a flash, earning savage reviews and less than half of the box office of the original.

“I think after the second one, it was just really one day at a time – I never really imagined even when we were shooting the second one that there would be a third,” Faris admits. “I was kept very much out of the loop. I still am. I can’t even believe that I’m here, because I can’t believe that I’ve survived. Regina [Hall] and I are the only ones who have been in all four and I keep thinking, ‘It’s because probably I’m pretty reasonable still, cheap for the studio to hire back.’”

After giving the franchise a year to go fallow, Scary Movie 3 was entrusted to spoofing legend David Zucker (Airplane!) and brought viewers back to the theaters. With the Wayans family off pursuing White Chicks, Faris suddenly became the series’ centerpiece as Cindy Campbell. Originally just a winking take on Neve Campbell’s Scream character, Cindy has become her own blissfully brainless entity, Faris’ creation.

“With Cindy, it’s really important to play her very sincerely, and she obviously has no sense of humor, which I think is funny in itself,” Faris smiles.

She continues, “The main difficulty in playing a character that’s not the brightest girl is just the sense of vanity. There are people out there who think that I’m very much like my character and that’s a bit of a hard pill to swallow, but I really do have a great time and I think that doing comedy in general is having a lack of vanity and trying not to have too much of an ego. Especially for a young woman, it’s easy to be like, ‘Oh, I really want to look good. I wish I could look sexy.’ But that’s not very funny.”

Faris is, in fact, obviously funny and not just when she’s playing dumb, though that’s usually all that’s asked of her. Outside of the Scary Movie films, she’s done a lot of small parts, though some have magically grown. A case in point would be this winter’s Just Friends, in which Faris’ goofy pop star became the centerpiece of commercials after audiences responded to the character.

“There just aren’t that many roles written for young women that are character-y kind of roles, especially in comedies,” Faris says with some regret. “There’s always the funny sidekick guy. I think that that’s the biggest challenge, that people don’t write interesting women very frequently. And then it’s easy to just hire a really pretty girl, because it’s just serving one purpose, the role.”

Without pausing, though, Faris confesses, “I don’t blame the industry. I sort of blame myself a little bit. I feel like if I had a little bit more initiative and I worked a little bit harder, I could develop something for myself.” Despite the paucity of opportunities, Faris has managed to pop up in some impressive places. With her memorable supporting turns in Lost In Translation and Brokeback Mountain, she’s been in films nominated for best picture at two of the last three Academy Awards ceremonies. But Faris doesn’t show up at parties and she doesn’t attend random premieres, she’d rather spend time with her husband (actor Ben Indra) than do the public things the industry expects of designated “next big things.”

“I really do hate that part of the industry, but I think it’s probably true that I should go to some of these things and do some of that stuff,” she says. “But at the same time I feel – and maybe this is very naive – a little bit like my career is a bit ahead of my publicity, which I appreciate. I feel like there’s room for surprises. I can still make interesting choices and I’m still a bit of a mystery and it’s nice. I feel a little bit like a chameleon.”

She stops, perhaps enhancing that mystery. Then she lets out a big smile. “And I’m also a little bit lazy.”