Young chefs are stirring things up in the Asian restaurant business 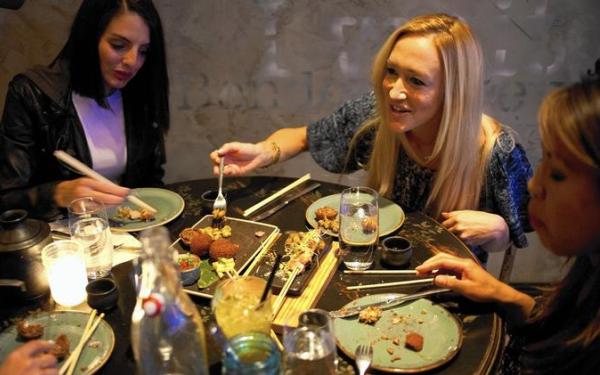 Young chefs are shaking up the Asian restaurant business, bringing a modern take on traditional cuisine to hip neighborhoods such as Silver Lake, downtown L.A. and the beach cities.

Gone are the MSG and mismatched china. Instead of hole-in-the-wall spots or massive banquet rooms crammed with chairs still swathed in plastic, these new eateries are sleekly modern and offer microbrews and craft cocktails.

They are seeking a slice of the nearly $27-billion Asian food industry by catering to adventurous eaters, especially millennials as familiar with bulgogi and pot stickers as meatloaf and lasagna.

"The Asian menu type is becoming more popular in the United States, and that's because as a culture we're broadening our horizons," said Brandon Gerson of CHD Expert, a food service and restaurant data firm.

In Los Angeles, with its large Asian population and competitive restaurant scene, some pioneering chefs are adding a upscale touch to Asian fare.

Many are U.S.-born chefs who defied their immigrant parents' dreams of a white-collar job. Instead, they are choosing to open restaurants serving up ethnic cuisine they grew up eating but with a flair that speaks to their experience as second-generation Americans in the Southland.

At Little Sister in Manhattan Beach, gangsta rap plays in an industrial-chic space where distressed plaster walls are stenciled with punk rock lyrics. The only hint of the cuisine served are the wooden chopsticks tucked into Mason jars.

Tin Vuong, the 35-year-old chef and co-owner, said he wanted to create a space that was a nod to his upbringing in the San Gabriel Valley but with a sophisticated vibe evident in his other restaurants, including WildCraft, which serves Italian food, and Abigaile, which specializes in New American dishes.

"I'm getting away from the idea of ethnic food being cheap," he said. "I wanted to create food that's representative of today's view with higher-quality ingredients."

Laurie Madden, 34, said she comes to Little Sister at least once a month. Before the restaurant opened, the Manhattan Beach resident said, there was no local place that suited her tastes.

"The food here is much fresher and lighter than other Asian restaurants," said Madden, perched at the bar on a recent weeknight.

Some say these up-and-coming chefs could revolutionize the Asian food scene in Los Angeles, where only 9% of the city's more than 800 independent Asian eateries are considered upscale, according to CHD Expert. Many of these owners are combining the traditional dishes they ate as children with the love of innovation fostered by culinary school and the Food Network.

"In Los Angeles we have always had the best Asian food in the United States," said Clarissa Wei, a freelance food writer who grew up in the Southland. "But within recent years the second generation has really come of age."

These newbie restaurateurs find they must strike a careful balance when landing in neighborhoods once limited to Thai or sushi joints: Be authentic, but don't scare diners away.

Pine & Crane, a Taiwanese restaurant in Silver Lake that opened in 2014, experimented with braised "trotters" — or pig feet, a common Chinese dish — but found that diners didn't take to the gelatinous texture, owner Vivian Ku said.

"Sometimes we will introduce a new dish that is more traditional and less likely to be liked," she said. "We are constantly trying to push those limits."

By opening in Silver Lake, Pine & Crane landed in a neighborhood of foodies who pay attention to what they eat, Ku said. Most of the produce comes from Ku's father's farm in Bakersfield. The restaurant also serves jidori chicken, which is sometimes called the Kobe beef of poultry.

"It doesn't have to be like before where you have to trek out for authentic food," she said. "We wanted this to be a casual daily spot."

Ku and Vuong of Little Sister graduated with economics degrees, hers from Harvard University and his from UCLA. Vuong worked as a financial analyst before quitting to attend culinary school; he kept the career change a secret from his parents.

"I didn't tell them what I was doing until five or six years later," Vuong said. "Every time they brought up my job, I was like 'Hey, I got to go!'"

Perry Cheung, co-owner of the Phorage restaurants, said it was tough explaining to his parents, who own a sewing factory, why he didn't pick one of the "Asian trifecta" careers: banker, lawyer or doctor.

"They did all the groundwork of the tough work," he said, recalling that they told him: "A restaurant is just the same, if not worse."

Phorage has found a niche with diners willing to pay a little extra for a gourmet version of classic Vietnamese dishes. A bowl of pho with oxtail is $12, and the banh mi sandwiches are $9.

The first Culver City location did well enough to open a second spot in Playa del Rey in November.

At downtown L.A.'s Peking Tavern, Andrew Chiu and Andrew Wong try to evoke the spirit of dining out in China.

The gray brick back wall is reminiscent of Beijing hutongs, or narrow alleyways encircling traditional courtyard homes. Bartenders serve cocktails made of baijiu, a potent liquor distilled from sorghum drunk by Chinese businesspeople and laborers alike.

The goal was to introduce mainstream diners to authentic Chinese cuisine in a modern setting, Chiu said.

"We wanted to redefine the experience," Chiu said, "make it more chef-driven and gourmet."

Special Features
How 2020 changed cooking for the better
189 views