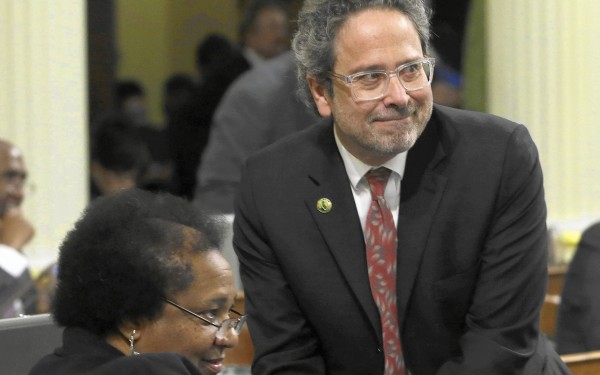 Assemblyman Richard Bloom, right, shown with Assemblywoman Shirley Weber in March, is a co-author of a bill that would increase the $200 filing fee for potential ballot initiatives to $8,000.
(Credit: Rich Pedroncelli, Associated Press)

Amid outrage over a proposed initiative that calls for the execution of gays and lesbians, the California Assembly on Tuesday passed two bills to discourage outlandish ballot measures.

One would increase the $200 filing fee for potential ballot initiatives to $8,000. Another would allow the state attorney general to include a disclaimer in initiative petitions when a proposed measure would be likely to result in a violation of individuals' constitutional rights.

Most Republican lawmakers opposed both bills, arguing that they are an attack on California's system of direct democracy, in which citizens can petition to change the law if the Legislature refuses.

Assemblyman Evan Low (D-Campbell), a co-author of the fee bill, said the current amount paid to the state before the attorney general prepares the title and summary of initiatives has failed to keep pace with the actual cost of that process, which he said averages $8,251.

"The $200 fee was first set 72 years ago," Low told his colleagues. "This reform is overdue, but more importantly it will also deter frivolous proposals from being submitted."

Assemblywoman Shannon Grove (R-Bakersfield) said the higher fee would make it difficult for individuals and nonprofit groups to file for an initiative. Based on the increase in the cost of living since the fee was implemented, she said, it should now be $2,700.

Grove said she agreed that the anti-gay measure should never have been filed. "But we still have to stand and allow people of this state to have the freedom to file an initiative without the overburden of expense to do that," she said.

Some increase is warranted, but an $8,000 fee is "wrongheaded," said Kim Alexander, president of the California Voter Foundation, which works to improve voter participation.

"Californians are very protective of the initiative process, and they will likely view an absurdly high increase in the filing fee to be an attempt by the Legislature to thwart the public's access to that process," Alexander said.

The legislation was introduced by Low and by Richard Bloom (D-Santa Monica) in response to an initiative proposed by a Huntington Beach attorney to authorize the killing of gays and lesbians by "bullets to the head" or "any other convenient method."

To qualify what he calls the Sodomite Suppression Act for the ballot, attorney Matthew McLaughlin would have to collect 365,000 signatures of registered voters in 180 days. But to get the process started, McLaughlin simply had to pay a $200 fee to have the state attorney general's office prepare a summary and title of an initiative so it can be submitted in petitions.

Atty. Gen. Kamala Harris is seeking a court order to allow her to reject McLaughlin's initiative.

Assemblyman Anthony Rendon (D-Lakewood) introduced the bill that would allow the attorney general to warn voters about initiatives that may be unconstitutional.

Republican Assemblyman Don Wagner of Irvine denounced the anti-gay proposal but said Rendon's bill, AB 884, would allow attorney generals in the future to inject politics into the process by including the notice on initiatives they don't like.

"This bill is an overreaction. It is using the proverbial hammer to deal with a gnat," Wagner said, before the 48-25 vote to approve the measure.

Another contentious debate occurred over a measure approved by the Assembly that would require some 200 private clinics that counsel against abortion to also provide women with information on their right to abortion services at other medical facilities.

The proposal by Assemblyman David Chui (D-San Francisco) would apply to private "crisis pregnancy centers." It would also require those that are unlicensed to disclose the absence of certified medical personnel.

Republican members voted against the bill, arguing that it forces clinic operators to set aside their opposition to abortion even if it violates their religious views.

"It violates their constitutional rights to require them to carry a government message," Grove said.

"This is about protecting the health and safety of women," Atkins said. "It's not about trampling on religious beliefs."