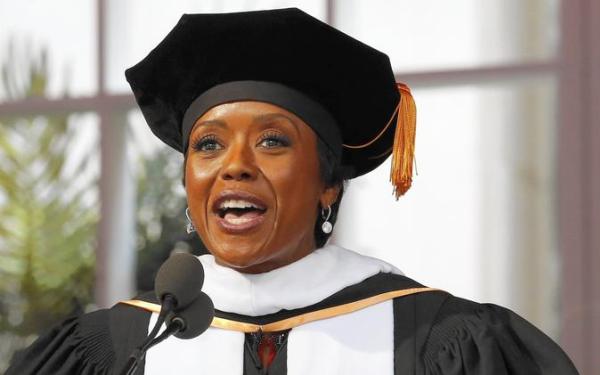 Ariel Investments President Mellody Hobson told USC graduates in her 21-minute address that they did not have to remember anything that she said “except three words - Just. Add. Bravery.”
(Credit: Patrick T. Fallon, For The Times)

Mellody Hobson was apprehensive at first when she was invited to deliver this year's main commencement address at USC. After all, she said, "you have to recognize that this is a very important moment in a young person's life. And there is nothing worse than the idea of falling flat."

So Hobson, who is president of Chicago-based Ariel Investments and one of the most prominent African American women in the finance world, began writing a speech that she hoped would be inspirational without being preachy, she said in an interview before the big day.

She wanted some humor, some personal revelation and "hopefully some wisdom that graduates will be able to reflect upon when they go out into the world," said Hobson, who is married to a master storyteller — "Star Wars" filmmaker and major USC cinema school donor George Lucas.

Hobson focused on bravery and how it can help people in big and small ways. As a recurrent metaphor, she recounted how daredevil parachutist Felix Baumgartner went sky diving in 2012 faster than the speed of sound from 24 miles above the Earth.

She told USC graduates in her 21-minute address that they did not have to remember anything that she said "except three words … Just. Add. Bravery."

Her speech and thousands of others at college commencements this season, and in past years, may not be recalled much by nervous graduates about to say farewell to classmates and hello to a new life. Some messages are embraced, some ridiculed and others just endured.

But their messages — whether of good cheer, dark warnings, larger political import or personal struggles — are garnering more attention off-campus now with the publication of two new collections of some of the greatest hits among commencement speeches of the last 15 years, from liberal and conservative perspectives.

The Internet and YouTube are giving commencement speeches lasting life too. For example, Apple co-founder Steve Jobs' address at Stanford University in 2005 has been viewed millions of times. Now, four years after his death, it remains powerful.

"Your time is limited, so don't waste it living someone else's life. Don't be trapped by dogma — which is living with the results of other people's thinking. Don't let the noise of others' opinions drown out your own inner voice," he said.

Lois Ferguson, president of the North American Assn. of Commencement Officers and director of the ceremonies at Baylor University in Waco, Texas, said composing these speeches can be tricky.

At their best, the addresses should be "inspiring, challenging, motivational and not too long," she said.

The speakers should try "to pass on their words of wisdom in a way that students remember." Some humor is encouraged, but most schools want to avoid controversial political or religious subjects that could divide audiences, she said.

And brevity is key. Decades ago, a speaker at Baylor went on for so long and with such arcane details that the school has since had its presidents address the graduates, she said.

Furors have erupted over the choice of commencement speakers. Last year, protests about various issues led several speakers to drop out well before the event, including former U.S. Secretary of State Condoleezza Rice from a Rutgers invitation and former UC Berkeley Chancellor Robert Birgeneau from one at Haverford College.

Yet the two new anthologies show that controversial figures are getting to campus podiums, although mainly to audiences with views close to the speakers'. Those collections are "The World Is Waiting for You: Graduation Speeches to Live by from Activists, Writers, and Visionaries," edited by Tara Grove and Isabel Ostrer, which presents mainly liberal and progressive addresses, and "Remembering Who We Are: A Treasury of Conservative Commencement Addresses," edited by Zev Chafets.

Grove said that some commencement speeches may be too long and contain too much "finger-wagging." But she said it was important to preserve the best of these "intergenerational exchanges" in print.

"The speeches are not going to change the courses of many lives, but there is a lot to be said for the reflection that takes place when someone shares their visions and hopes for tomorrow at this very transitional moment," she said.

Her collection of 18 speeches includes those by musician Wynton Marsalis at Connecticut College in 2001; feminist writer Gloria Steinem at Smith College, 2007; and Planned Parenthood President Cecile Richards at Barnard College, 2014.

Chafets wrote that he chose the volume's 30 speeches as a counterweight to what he said was the liberal political correctness at most colleges.

"It is literally impossible to maintain an open society without hearing and understanding the other side," Chafets wrote. He said he hoped to inspire young conservatives and to "enlighten liberals by exposing them to new and unconventional thoughts."

For USC's May 15 commencement, Hobson said, she worked on her speech for months, showing drafts to friends and hiring television and magazine writer Nell Scovell for some help, although Hobson said all the ideas and references were her own. Hobson did not tackle overtly political topics, but she did discuss the bravery of civil rights activists and encouraged the audience to look past racial and gender stereotypes.

She traced her own life, from a childhood in a low-income, single-parent family to her relationship with Lucas. And she returned to the example of Baumgartner, the sky diver, saying that "that sitting 24 miles up is not that different from where you are sitting today. Graduating from college is a major transition. You may be excited. You may be eager. And like Felix, you may also be scared."

She closed by saying that she hopes the graduates are brave and loved.