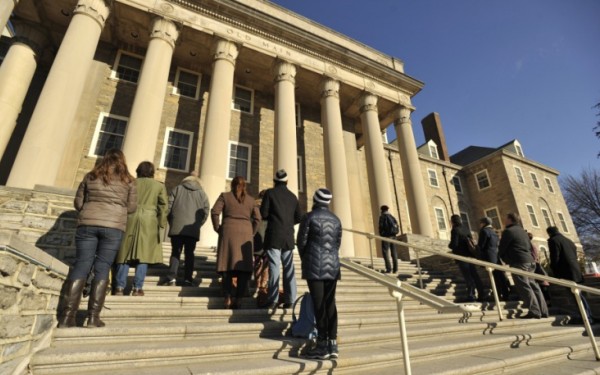 STATE COLLEGE, Pa. — The Penn State fraternity under investigation by State College police over reports that the fraternity posted photos of nude, unconscious women to its Facebook page will not be recognized on the University Park campus for three years.

The decision to revoke recognition of Kappa Delta Rho by university officials is a reversal of a course of action prescribed by the student-led Interfraternity Council, according to a press release from the university Tuesday. Damon Sims, vice president for student affairs, recognized that not all members of the Penn State chapter of the frat engaged in any wrongdoing.

“Even so, the sum of the organizational misbehaviors is far more than the university can tolerate from a student organization that seeks its imprimatur,” Sims said.

An investigation by the university also determined that members of the fraternity also engaged in hazing, sexual harassment and other misconduct, the release said.

The student-led IFC had originally decided not to revoke KDR’s recognition but would take steps to change the culture at the fraternity through measures including a comprehensive new member education program and participation in sexual assault and bystander intervention training, according to the release.

In a letter to the fraternity, Sims wrote that while the university generally defers to the judgment of student bodies, it decided to take action because Penn State’s standing as an educational institution “and its responsibilities compel a stronger response” than the IFC recommended.

A statement from Joseph Rosenberg, national executive director of Kappa Delta Rho, said that the fraternity’s national leadership investigated the matter internally and any member found to have committed any improprieties will be disciplined, up to and including expulsion.