UCLA is seeded No. 1 in NCAA baseball tournament 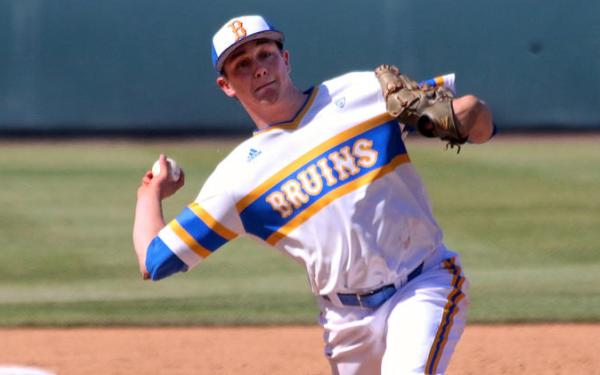 LOS ANGELES — UCLA pitcher David Berg has less than total recall about the 2013 College World Series. He was there, closing out the Bruins’ victory that gave them their first national title.

Other than that, he draws a blank.

“I was really so locked into the moment that I don’t remember a ton about it,” Berg said.

Except the postgame celebration.

Berg had a different view of the CWS last year. Injuries depleted the Bruins to the point where they didn’t reach the NCAA tournament.

“I didn’t really watch it,” said Berg, a senior who is the Bruins’ all-time leader with 48 saves. “I was pretty disappointed not to be in it. I was already on to the next thing, which was getting back to work to make sure we weren’t out of it again.”

Part of that mission has been accomplished. The Bruins were ushered Monday into this year’s tournament as the top-seeded team. They will play host to a four-team regional and face Cal State Bakersfield on Friday at 8 p.m. Maryland will play Mississippi at 4 p.m. in the first game of the regional.

“We’re very honored and excited to be the No. 1 seed,” coach John Savage said. “Whenever you get that label, it has a lot to do with your body of work on the field.”

But, Savage said, “we realize this is a brand new season, a brand new opportunity. It doesn’t mean a whole lot when you get into the 64-team field.”

Cal State Fullerton and UC Santa Barbara also were selected to play host to a regional.

Fullerton, the Big West Conference champion, plays Pepperdine on Friday at 7 p.m. Arizona State faces Clemson at 3 p.m. in that regional’s other game.

Santa Barbara will hold its regional at the Diamond in Lake Elsinore, where the Class-A Lake Elsinore Storm plays. The Gauchos’ home stadium lacks the lighting and seats the NCAA requires to play host to a regional.

Santa Barbara plays San Diego on Friday at 7 p.m. and USC plays Virginia at 3 p.m. It is the Trojans’ first appearance in the NCAA tournament since 2005. Their 12 national titles are the most by a school.

UCLA has been to the CWS three times since 2010. The Bruins have been to the NCAA tournament eight times in Savage’s 10 seasons. They have won 10 consecutive postseason games, having gone undefeated in the 2013 tournament.

All they could do was watch last year after limping home with a ninth-place finish in Pac-12 play. Vanderbilt won the national title, something Berg barely noted.

“When Vandy won, I watched the highlights of it, just a little reminder and taste of what it looks like and that there were other teams out there,” Berg said.

The 2014 disappointment fueled the off-season work, but that memory is in the past, UCLA players said. The Bruins appear bent on proving that last season was an anomaly, finishing 22-8 in the Pac-12, the most conference victories in school history.

“We have been pretty good for the majority of the season, from the first game until the 56th game,” Savage said.

The weight of the conference played a role in the section committee jumping the second-ranked Bruins over Louisiana State, which has been No. 1 in the polls most of the season. Pac-12 teams have won four of the last nine national titles, one more than Southeastern Conference teams in that time.

The Pac-12 has six teams in the tournament, but only UCLA was given the role as a regional host.

The other conferences in the West had only five teams get into the tournament — two from the Big West, and one each from the West Coast, Mountain West and Western Athletic.

The tournament tilts toward the South, with the SEC and Atlantic Coast Conference each getting seven teams in the field.