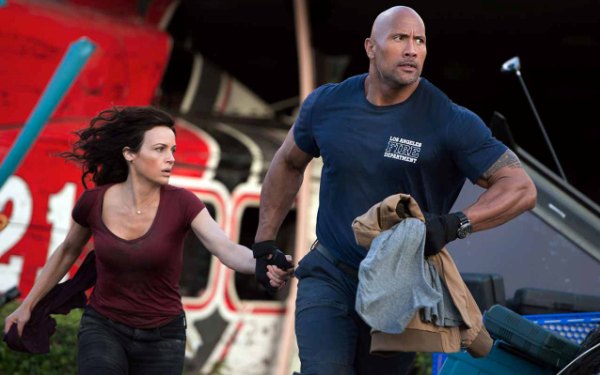 According to director Brad Peyton and star Dwayne Johnson, however, it’s the human factor that makes this magnitude 9.0 California destruct-a-thon special.

“We had a huge undertaking, obviously the most challenging and ambitious thing that I’ve ever done,” says Peyton, who previously teamed with Johnson for the 2012 adventure “Journey 2: The Mysterious Island.” “My main focus, though, was actually just getting great performances. I knew we’d have the spectacle, I knew we’d have a lot of visual effects, but I focused on making it as realistic and grounded an experience as I could.”

“We were shooting ‘Hercules’ at the time I read the script, in Budapest,” adds Johnson, who has parlayed his professional wrestling career as The Rock into movie stardom in the “Fast & Furious” and “G.I. Joe” films, among many others. “I couldn’t put it down. I read it until 3 o’clock in the morning, and my wakeups in Budapest were at 3:45! This just had so many elements that I got totally into.”

For Johnson, who split with his wife of 10 years back in 2007, “San Andreas” really struck him personally.

“Being a divorced father myself, I understood what that’s like, and the pressures of being a dad and working and putting in time and trying to foster relationships. So there were a lot of elements I immediately loved,” Johnson explains.

In “San Andreas,” Johnson plays Ray, a super-capable Los Angeles fire and rescue helicopter captain who still loves his estranged wife Emma (Carla Gugino), even as she’s preparing to move in with big-time real estate developer Daniel (Ioan Gruffudd). Ray has weekend plans to drive his daughter Blake (Alexandra Daddario) to the Bay Area for a sporting event, but when Hoover Dam gets torn apart by a temblor, he must go help in Nevada while Blake flies to San Francisco on Daniel’s private plane instead.

But that disaster on the Colorado River was just the start. The next thing you know, Downtown L.A. is leveled (Ray flies back just in time to pluck Emma off a collapsing skyscraper), the breach works its way up the Central Valley and Blake is soon struggling to survive — and help others — in a shaking San Francisco while her parents try to reach her before it’s too late.

Meanwhile, back at structurally reinforced Cal Tech, Paul Giamatti’s seismology whiz and his students try to get lifesaving predictions out to those in the angry planet’s path while looking increasingly graver as every new bit of data confirms their worst fears.

“We researched a lot with Professor Tom Jordan at USC,” Peyton explains. “We’d done our own research, read every kind of article and journal you can get your hands on, but we would always go to our professor and ask him how could this all happen, how people would really discuss this event.

“It’s funny, because literally four days before we went to shoot the Cal Tech scenes, the whole methodology of trying to predict earthquakes changed. We had to change all of the dialogue because we were just trying to stay on top of everything, make the story as advanced as it could be,” Peyton continues.

Filmed mostly in Australia with one week of shooting on the streets of San Francisco, “San Andreas’?” efforts at realism — or not — is, of course, the kind of film that can be uncomfortably buffeted by events in the real world.

“One of the things that was very challenging — very eye-opening too, I think — was not just experiencing it as an actor, but also experiencing it from a reality standpoint, like if it were to actually happen,” Johnson notes.

A surreal taste of that came during last month’s MTV Movie Awards, when a small temblor rattled L.A.’s Nokia Theatre where Warner Bros. was making a “San Andreas” promotional presentation.

A much more devastating reminder of how serious the subject is came when a magnitude 7.8 quake hit Nepal on April 25, resulting in thousands of deaths, widespread damage and Himalayan avalanches. Warner Bros. declined to postpone “San Andreas’?” release in response, but vowed to promote the film tastefully.

“Ultimately, this is a movie that’s meant for entertainment,” Peyton says. “It’s always going to be that first and, frankly, the movie is about perseverance. The theme of the movie is about a family trying to put themselves back together and persevere through these events. So I promote the movie with sensitivity and I’m aware of the real world ramifications of the events in the movie, but I also believe in what the movie’s saying, which is that when these things happen, we can band together and get through them.”

Peyton believes “San Andreas” ultimately reflects virtues from the disaster genre’s 1970s heyday — films like “Earthquake” and “The Towering Inferno” — better than the more cartoonish variation directors such as Roland Emmerich (“2012,” “The Day After Tomorrow”) have offered this century.

“This movie’s tone is very different from something Roland would do,” Peyton states. “Roland is obviously a very good filmmaker, but this movie feels a little grittier, a little more like the movies that I grew up with: very grounded but still cinematic, with some fun to it.

“In terms of the Charlton Heston ‘Earthquake’ and those older disaster films, for people who liked those, this gives you the same amount of story and character,” Peyton continues. “Obviously, ‘San Andreas’ is at a whole new level in terms of visual effects, sound design and all of that. Our scale and scope are unbelievably massive in a way you couldn’t achieve back then.

“But I think what people really loved about those movies is that they had real people in them, real characters, and that’s something that’s gotten lost a little bit. That’s why I made it the most important thing to me.”