Complete: the app that lets you make your to-do lists public 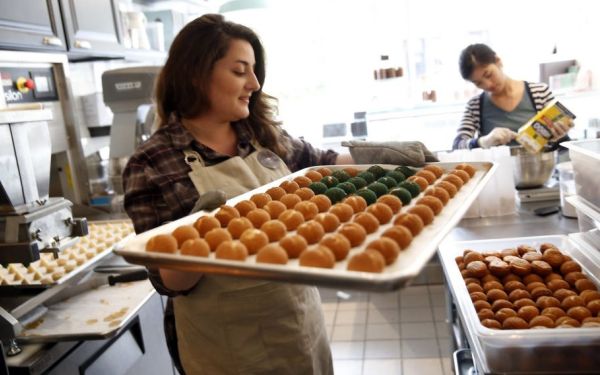 Laura Athuil, the owner of Choux, a bakery in the Lower Haight, uses the app Complete to keep track of her to-dos as a business owner.
(Credit: Scott Strazzante, The Chronicle)

We all have them: needy Facebook friends who are always posting about their workouts, wedding plans and other aspirations as a way to get advice or a virtual pat on the back.

Now, there’s a tool for that.

Complete is an app that allows users to make their to-do lists public, whether their aim is to plan a vacation, quit smoking or finish laundry. Once they’ve posted, their friends — or strangers — can offer advice or encouragement. The platform pulls from your Facebook friends, but your to-do’s can be fodder for anyone using the program, unless they’re kept private. Users post updates as they make progress and check off the tasks when they’re done.

Other social networks aren’t as good at this. “When you look at the social networks that exist, Facebook’s about self-publishing: What I have done. Twitter is what I’m maybe doing right now or thoughts. There wasn’t really a dedicated space for ‘This is what I’m going to do,’” Schultz said.

On Thursday, the Palo Alto company announced a Web app and $1 million in venture capital, including investment from Alloy Ventures, Structure Capital and Red Eagle Ventures.

People have long turned to social groups to help them achieve their goals: They join book clubs to read more, exercise classes to lose weight or support groups to stop drinking or using drugs. Now that Internet devices are ubiquitous, it makes sense for people to go online for that type of support, Schultz said.

Studies have found social media can help people achieve their goals in health and fitness: That’s the basic idea behind apps such as Strava and Fitocracy, where the fitness frenzied chronicle their workouts.

But without personal engagement, a social network may not be enough.

In a 2013 study of weight loss among college students, the students who joined a Facebook support group and also received encouraging text messages and personalized feedback lost more weight than a group that joined a Facebook group alone. The group that lost more weight had results similar to those achieved in a real-life weight-loss support group led by a dietitian.

“People will often find their tribe. They consider each other close friends even though they’ve never met each other,” Wang said.

In his experience, users want to engage — even with strangers — because it gives them a space to be an expert: The friends and family of a gym rat don’t necessarily want to hear workout advice, but people on a workout app do.

David Blado, who invested in Complete, says the concept can extend to other hobbies and tasks.

“When you take just the population of the Bay Area, just in this little concentrated area there’s a lot of people who are trying to do very similar things and they’re either not finding the support that they need to accomplish them or they’re not quite sure that they want to accomplish them yet,” he said.

On Complete, Schultz said, he sees support communities forming between people who have things in common, whether that’s real-life friendship, location or hobbies. Most of the interactions are positive, though every online community risks resident trolls.

On top of tasks

Laura Athuil, the owner of Choux Bakery in San Francisco’s Lower Haight neighborhood, uses Complete to stay on top of her to-do’s at the shop, like finishing window displays and picking up goods at the store — but also as a sort of marketing tool.

Last month, she posted that she needed to finish some matcha tea cream puffs. She uploaded photos of the process with updates, and then the finished product. Along the way, she got several likes and a few comments. Sometimes, she said, her efforts drive customers into her shop for goodies.

“People see it on the Complete app and it looks really good. They like to be part of me creating this new flavor, she said.

So far, it seems that people are more apt to chime in on larger projects than more menial tasks. The key to growth, as with all social media, will be engagement. What remains to be seen is whether big ambitious plans — right next to others about taking out trash and walking the dog — can hold users’ attention.