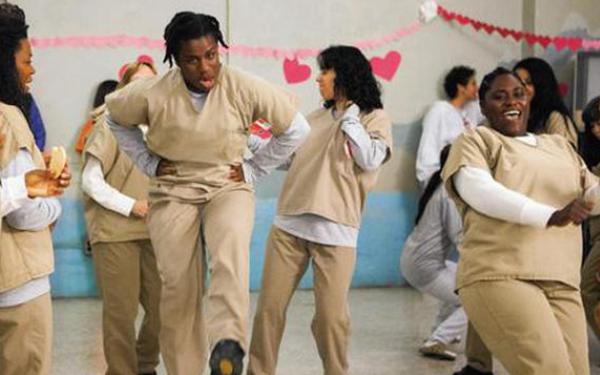 Now that it has lost its petition to remain in the comedy field, "Orange Is the New Black" enters the more competitive drama category.
(Credit: K.C. Bailey / Netflix)

Last year's Emmy season started off confusing ("Orange Is the New Black" is a comedy? Really?) and ended up wholly predictable, with no new winners in the drama and comedy series and acting categories, and "Modern Family" taking the comedy trophy for the fifth year running. And while television academy voters have never really been known for their impulsive choices (Again with the "ER"?), the rubber-stamping of the past seems at odds with the sheer volume of great choices available every year.

Put it another way: If we are indeed living in yet another Golden Age of television, shouldn't somebody besides Julia Louis-Dreyfus and Jim Parsons win an Emmy?

The television academy's board of governors seems to think so, changing several rules in recent months that might make this year's Emmys a bit more interesting. "I think we'll know fairly quickly if these have an impact on the process," says television academy Chairman Bruce Rosenblum.

At the very least, the revisions bring some much-needed clarity to a couple of categories that sported a few eyebrow-raising entrants last year.

A breakdown of the changes and what they mean:

Translation: "We need voters who laugh at other shows besides 'Modern Family.'"

Effect: Previously, members couldn't vote in more than two categories within their peer group. Now they can go crazy and check off boxes in as many eligible categories as they like. And, because the episode submissions will now be available online, Rosenblum believes (relative) newcomers will be encouraged to vote.

"If we can expand the voting and enable our younger members to participate in greater numbers, that's a positive," Rosenblum says.

More voting usually produces fewer quirky choices, so it remains to be seen whether any possible youth movement makes up for that. Then again, these days a show like Amazon Prime's transgender comedy "Transparent" isn't considered any more envelope-pushing than, say, "Modern Family." The volume and variety of offerings could split votes in ways that produce a surprise or three.

The new rule: "Due to the dramatic increase in series production, the number of nominees for 'comedy' and 'drama' series has been increased from six to seven."

Translation: "We have heard the cries of bitter anguish and will increase the ranks of the chosen accordingly. Just don't expect any glad tidings for 'Orphan Black' or 'The Walking Dead.' They will continue to dwell in the darkness of the genre-afflicted."

Effect: Will voters simply add another offering from the Netflix/HBO Emmy factories or take a deeper look at broadcast network offerings? Memo to television academy: Ignore "Empire" at the risk of both the ceremony's ratings and relevance.

Clarification of a 'comedy' and 'drama' series

Translation: "Yes, 'Orange Is the New Black' has its lighter moments. So does 'Game of Thrones,' but it's not calling itself a comedy, and you shouldn't either."

Effect: Five hourlong series ended up petitioning this year to be placed as comedies. "Shameless," "Jane the Virgin" and "Glee" won at least six of the nine votes from the panel. "Orange Is the New Black" lost its case, as did another, unnamed show. ("Our policy is not to disclose the petitions that are unsuccessful," Rosenblum says, clarifying that it was Netflix, not the television academy, that spilled the beans on "Orange.")

"Orange" won three Emmys (casting, editing and guest actress Uzo Aduba) competing as a comedy, but many voters gave it the cold shoulder, believing it didn't belong with the likes of "The Big Bang Theory" and "Modern Family." The drama categories are more competitive, but "Orange" is a better fit there, particularly for its tough-minded second season. The only thing working against it is that you could almost completely fill out the supporting actress category with women from the show (Aduba, Kate Mulgrew, Lorraine Toussaint, Laverne Cox, Danielle Brooks ... we could keep going, you know).

The new rule: "Only performers appearing in less than 50% of a program's episodes are now eligible to submit in the guest actor category."

Translation: "You're not a guest if your stay is open-ended. What do you think this is? Foreign policy?"

Effect: Three of the four guest actor winners last year (Aduba, Allison Janney from "Masters of Sex" and "Scandal's" Joe Morton) were series regulars in all but name only.

"The prior rule was based on an older concept of 'what does the contract say' and 'what is the credit on the screen,'" Rosenblum says.

The change restores the intent of these categories, rewarding actors for their work on single episodes or short story arcs. Think Michael Rapaport's raw, riveting turn as a cop on "Louie" or Lois Smith's heartbreaking work opposite Keri Russell on "The Americans." Single episodes, singular acting.