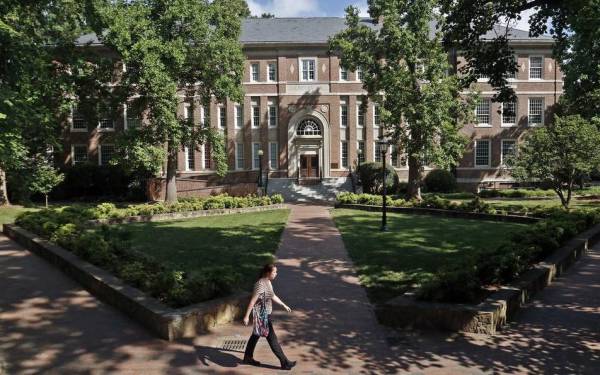 CHAPEL HILL, N.C. — The University of North Carolina-Chapel Hill Board of Trustees voted 10-3 Thursday to rename Saunders Hall “Carolina Hall,” stripping the name of William Saunders, a UNC graduate and trustee who was purported to be a member of the Ku Klux Klan in the 19th Century.

The vote came after about a year of deliberation since student activists demanded a name change for Saunders. Protesters stood by with signs calling the building “Hurston Hall,” their preferred new name that would have honored African-American writer Zora Neale Hurston.

Calling Thursday’s action a comprehensive solution, the trustees voted unanimously on two other resolutions – a 16-year freeze on the renaming of other buildings, and a broad effort to curate UNC’s history with accurate markers and the possibility of a public space on campus to house a permanent collection. Campus task forces will begin to work on those issues, including the idea of an online orientation program for students to learn about UNC’s history, values and contributions.

Trustees said they struggled with the controversial issue, and some who voted for the name change said they were initially inclined not to erase the name from the university landscape. But they said the original trustee board who named the building for Saunders erred in that decision and that the current board had the obligation to undo it.

“We’re not changing history, we’re not rewriting it,” said Trustee Alston Gardner. “We’re shining a bright light on it.”

He also congratulated student activists for their perseverance, but said he hoped they would direct their passion to more important matters, such as the state of African-American males in society or hungry children in North Carolina.

Board Chairman Lowry Caudill said the board could have “kicked the can down the road,” but chose instead to “take a deep dive” and seek a comprehensive solution.