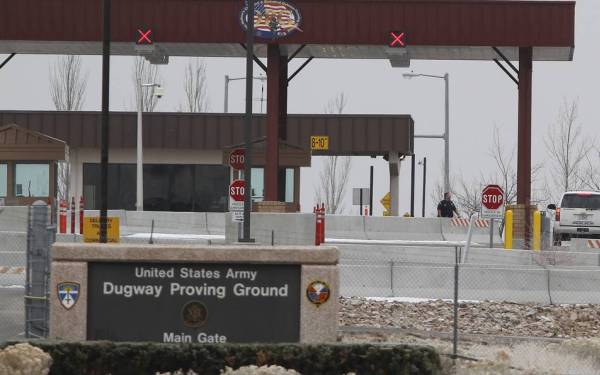 The main gate at the Dugway Proving Ground in Utah, home of the lab from where the anthrax was sent out.
(Credit: Jim Urquhart/Associated Press)

STANFORD -- Stanford University was identified as one of several labs across the country that may have received a live anthrax sample last summer from the U.S. Army.

Stanford spokeswoman Lisa Lapin said the university "is secure and there is no threat to campus or public safety" stemming from the shipment of a single vial in July that may have contained very small quantities of live anthrax spores.

The vial, which was not used by the university, has been sent to the U.S. Centers for Disease Control for analysis, Lapin said.

Thursday, the Army's top general said human error probably was not a factor in the Army's mistaken shipment of live anthrax samples to numerous U.S. government and commercial laboratories in the U.S. and in South Korea, according to the Associated Press.

Gen. Ray Odierno, the Army chief of staff, said the problem may have been a failure in the technical process of killing, or inactivating, anthrax samples. The process in this case "might not have completely killed" the samples as intended before they were shipped, he said.

Odierno said the Centers for Disease Control and Prevention is investigating that aspect of what went wrong at Dugway Proving Ground, the Army installation in Utah that sent the anthrax to government and commercial labs in nine states across the U.S. and to an Army lab in South Korea.

The Pentagon disclosed on Wednesday that at least one of nine labs in the U.S. that received anthrax from Dugway got live rather than dead bacteria. It has not identified any of the U.S. laboratories by name but said they are in nine states: Texas, Maryland, Wisconsin, Delaware, New Jersey, Tennessee, New York, California and Virginia.

The CDC informed Stanford officials on Tuesday that a number of laboratories around the country, including the lab at the Stanford School of Medicine, may have received "minute" amounts of an active select agent shipped by the U.S. Department of Defense in July, Lapin said.

The CDC has advised the university that the material, which may be present in extremely small quantities, is very unlikely to pose any risk. However, the university immediately launched a safety review of the laboratory where the material was handled by two individuals using "appropriate biosafety guidelines," Lapin said.

The Stanford laboratory that received the materials is studying immune system responses for potential creation of preventive vaccines and treatments for biological threats, Lapin said.

The research is being conducted for the U.S. Food and Drug Administration.