Eva Longoria: Trades Wisteria Lane for the Secret Service in The Sentinel 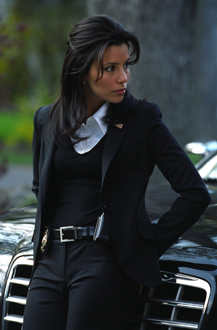 Eva Longoria may play a superficial, self-absorbed housewife on television, but she’s hoping audiences see a different side of her in The Sentinel.

Dressed in a knee-length, black satin skirt and off-the-shoulder top with black polka dots, Longoria’s petite frame barely takes up any space on her chair at the Four Seasons Hotel. A diamond-encrusted number nine hangs around her neck – a Christmas gift from boyfriend Tony Parker, point guard for the San Antonio Spurs.

Before being cast as Gabrielle Solis – a former model who doesn’t pretend to be anything but completely narcissistic – on “Desperate Housewives,” Longoria, 31, was getting by with bit parts on television and direct-to-video features.

“Desperate Housewives” has certainly raised her profile in the eyes of the public, but it has also created an expectation regarding the types of roles she can play. Longoria says she chose The Sentinel in order to break the mold that she created with Gabrielle.

“Especially in television when you’re seen in someone’s house every week they do tend to see you as that person. I wanted to do something different early on and change it up to where people go, ‘Oh, I didn’t even see that.’ The Sentinel really captures that I think. You don’t even see a glimpse of Gabrielle,” Longoria says. “[My character in The Sentinel] Jill Marin is actually closer to who I am as a person so it’s always nice to play that.”

In The Sentinel, Longoria plays a rookie Secret Service agent opposite Michael Douglas and Kiefer Sutherland. “People keep saying, ‘Wow, it’s such a stretch for Eva Longoria’ [but] if you look at my earlier work, I always played the detective. I always played the cop,” Longoria says.

As part of their training, the actors spent a day with former Secret Service agent Gerry Cavis, who served as the film’s Secret Service advisor, shooting live ammunition at a gun range.

They used the same weapons – 9 mm Sig-Sauers, holsters, belts and rounds – as those used by agents, plus proper protective clothing. All three were required to do live fire shooting on an indoor range, with target practice at three, five, 7, 15 and 30 yards, both standing and kneeling, with time limits. Longoria hit every target at 30 yards.

“She was exceptional,” says Cavis. “In fact, she would be recognized as a good shot even in the Secret Service. It was impressive.” Longoria grew up handling firearms on her father’s ranch in Corpus Christi, Texas. Target shooting was a regular activity Longoria enjoyed with her three sisters.

“We’d shoot coffee cans and tin cans and coke cans and beer. Anything that exploded and made noise, we’d shoot it,” says Longoria, who graduated with a degree in kinesiology from Texas A&M in Kingsville. Longoria made her way to Hollywood after winning a talent contest that brought her to Los Angeles. Her first major break was landing the role of Isabella on “The Young and the Restless.”

These days, being a celebrity can mean much more than just being an entertainer, and Longoria says she has no problem being a role model. She has an older sister who is mentally retarded and that had a big effect on the way she was raised.

“All I ever knew was to treat people [well] and be selfless all the time because that’s how our family was,” says Longoria, who began volunteering for the Special Olympics at a young age.

“I was always in a leadership position and I always had some form of being a role model. Obviously the platform I have now is much bigger and because of that I’ve chosen to be very specific about what I put my voice to for volunteering,” adds the actress, who is the national spokesperson for Parents Against Cancer. The organization helps Latino families who have children with cancer by providing them with educational, financial and lingual resources.

“Latino children have the highest death rate [due to cancer] and cancer in children is the most curable so there’s really no point in anyone dying from it,” Longoria says.

The dynamic between the characters played by Longoria, Douglas and Sutherland – she’s the rookie agent and they are the more seasoned professionals – reflected the real-life situation on set.

“I’m the rookie film girl and you know they’ve done a hundred films each and it was comforting to know we all had a common thread of television,” Longoria says.

That common thread continued through to the director, Clark Johnson, who played Detective Meldrick Lewis on “Homicide: Life on the Street.” Johnson’s experience in television meant he was more sensitive to issues facing Sutherland and Longoria.

“He knew Kiefer and I had to be done by a certain date because we had our shows and we were only available this amount of time. He was really conservative with the shooting days … where a lot of film directors could care less about your TV show. Also the pace of the movie was actually quite fast,” Longoria says.

Longoria has yet to find a project to fill her summer hiatus from “Desperate Housewives” and admits the quality of the writing on the show has made it hard for her to find anything better elsewhere.

The actress keeps the paparazzi at bay by splitting her time between Los Angeles and San Antonio, Texas.

“I live in San Antonio. I work in LA, so I’m home every weekend. Tony and I see each other three to four times a week sometimes. Tony is the big celebrity, obviously, in San Antonio and I never get bothered,” Longoria says.

Not that she’s complaining about the pitfalls that come with the amount of success she is experiencing. And she tries not to let her celebrity status get to her head.

“The other day I got a box of Ziploc bags and I used it for something and the zipper broke. Then two days later another zipper broke and I was like, ‘I have a faulty box of Ziplocs!’ I was so upset I called the number on the back. My assistant said, ‘We’ll go buy another box.’ I’m like, no, this is really upsetting. People put trust in this,” Longoria says, concluding, “I called for a free box and they sent me five.”

The Sentinel releases in theaters April 21.

Interviews
Ai Weiwei on activism in the US, his art response to COVID-19 and a secret Wuhan film
452 views

Interviews
James Bond producer: 007 ‘can be of any color’ but never a woman
1,773 views

Interviews
For Martin Scorsese, making ‘The Irishman’ was about ‘learning to die’
1,409 views

Interviews
Maleficent doubts her fitness as a mother. So did Angelina Jolie
1,023 views
bid=||