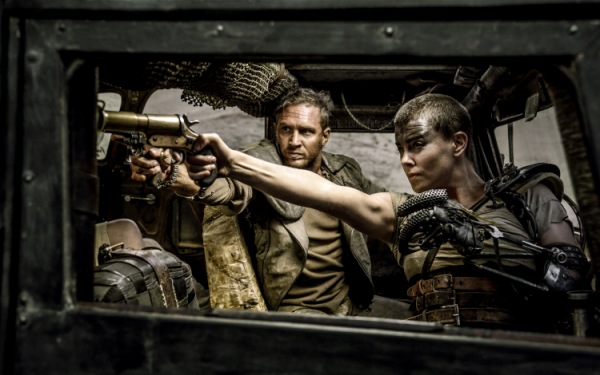 The mad machines of the overlords sprung from the apocalypse. The great cities beyond the plains of silence no longer existed. The land was ravaged, resources scarce. All that remained of the past was a story about a time when the Earth was green and the rivers flowed.

“Mad Max: Fury Road” careens through a battered world like a rabid ferret. The new film by George Miller is visually riveting and technologically stunning. But it’s a tale as old as existence. Since man first etched images on cave walls, he has pondered his demise, whether by fires, storms, meteors, gods, wars, plagues, alien invaders, nuclear weapons, financial meltdowns or anything that speaks to his insignificance against the designs of larger forces.

We are at once frightened by and drawn to the precipice. Movies about cataclysm articulate our anxieties and — despite insipid dialogue littering the fiery road to oblivion — allow our vulnerabilities to be laid bare, our catharsis shared.

During the Cold War, films such as “Invasion of the Body Snatchers” and “Dr. Strangelove” embodied our paranoia about the Soviet menace and nuclear annihilation. Over the last 20 years, movies about the end of days have been steady. “Contagion” deals with a global pandemic, “Independence Day” has us tangling with laser-slinging aliens, “The Day After Tomorrow” sticks us in the deep-freeze of climate change, and “Deep Impact” sends comets rocketing our way.

Among the most stark and poetic of doomsday cinema is “The Road,” based on the story by Cormac McCarthy about a man and his son traveling like vagabonds through a scoured landscape of post-Armageddon. “Nights dark beyond darkness and the days more gray each one than what had gone before,” the novel begins. “Like the onset of some cold glaucoma dimming away the world.”

Cinema and literature remind us that our resources are finite, our demons many, and that despite our capacity for wonder we possess the conceit and folly to turn the planet into a vicious Darwinian struggle. No one knows this better than Hollywood, ground zero for big-budget calamity, including “San Andreas,” the new earthquake epic set in Southern California.

“We’ve always been smaller than nature,” said Hal Ackerman, co-chair of the screenwriting program at the UCLA School of Theater, Film and Television. “We look to the universe and the stars and wonder how we got here.”

The search for meaning and a way to cope gave rise to allegories, myths, science and religion. The Bible’s Old Testament conjured plagues of locusts, lice, boils, darkness and hail even before the Book of Revelation unleashed the Four Horsemen of the Apocalypse. Greek gods toyed with mortals, sending Odysseus toward conniving sirens, a Cyclops and other dangers on his journey home from war. These tales defined the early canon of Western literature and showed that despite heroism and resilience man was hostage to elements beyond his control.

The words of 17th century philosopher Thomas Hobbes — if spoken by James Earl Jones or Morgan Freeman — would have made an ominous opening voice-over for the new “Mad Max” film. “No arts; no letters; no society; and which is worst of all, continual fear, and danger of violent death: and the life of man, solitary, poor, nasty, brutish and short.”

These days, social media have allowed us to enter the global narrative and witness our dangers in real time. Charlize Theron, who plays a rebel with a quick gun and a menacing stare in “Mad Max: Fury Road,” said after a recent screening in Cannes that the film addressed issues of “global warming and issues of drought and the value of water, leadership becoming completely out of hand.”

“There are images right now on Google of Sahara desert sand being blown like that in that state all through (Africa),” she told reporters. “And it’s absolutely frightening ... and it’s in a world that I think makes it even scarier because it is something that is not that far off if we don’t pull it together.”

Twitter feeds and YouTube have upped the stakes for Hollywood in its ability to surprise and shock us. “Movies have to create larger, extravagant spectacles to compete,” said Ackerman, author of “Write Screenplays That Sell: The Ackerman Way.” “It’s all about technology. The ideas behind (apocalypse stories) haven’t really changed. But it’s the execution that’s so much more sophisticated.”

Much of what imperils is insidious, creeping; not hurtling toward us. The news illuminates the immediate and extraordinary. But often not the incremental, such as how to handle the impact of a 1-degree rise in global temperature, the U.S.’ increasing reliance on pharmaceuticals or a mutated viral strain edging through the African jungle.

Such stories “are slow moving, and we don’t react to that,” said Scott Z. Burns, who wrote the screenplay for “Contagion” and produced the Academy Award-winning documentary about global warming, “An Inconvenient Truth.” “Human beings have a very tricky relationship with risk assessment.... But in a movie, you can speed (a threat) up so that it does connect to the primal.” He added: “We have a water problem in California. Let’s extrapolate on that and see where it goes.”

Burns is working on a scripted series for Showtime about our declining infrastructure. “That’s really interesting,” he said. “What happens when the things that appear to be solid become less reliable. Things that aren’t supposed to fall apart are falling apart.” He added that neglect and decay may mean that, despite our ingenuity and defiance of gravity, “the buildings at some point will come back to get us.”

But by the time the Earth starts to shake, buildings crumble and the overlords in “Mad Max” kill for water, rational thought has been blurred by the instinct to survive.

“We get crippled by fear,” said Burns. “We don’t really know what’s going on, and we become reactive to the wrong thing when confronted with a crisis.”

Special Features
Digital theater is all the rage, but could it destroy the live stage?
180 views

Special Features
Now’s the perfect time to dive into musicals. Here are our critic’s top 7 to watch
231 views

Special Features
Oscars 2020: Who will win and who should win
854 views

Special Features
Secret screenings. Redacted scripts. How they make the twists in ‘This Is Us’
351 views