In director Rick Famuyiwa's Dope, style is a matter of fact 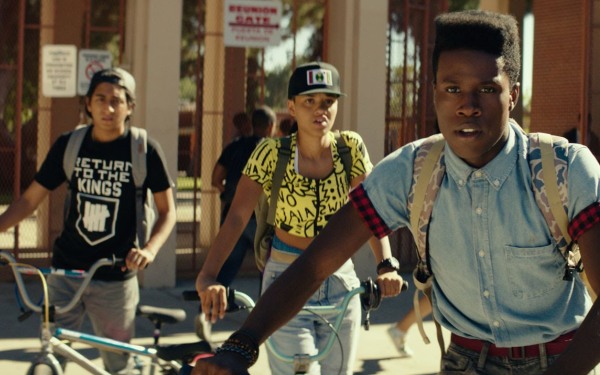 There’s a lot of words out there that make people uncomfortable, and “different” is probably one of the most simple, yet wholly complicated of the bunch. It connotes something alien, something scary even, to a point where we often shut out anything or anyone that claims that kind of identity. But let’s be real, difference is precisely what makes life fun.

Cue Dope. It’s a story about style, a story about friendship, a story about the kind of difference that can either land you in jail or land you a spot at Harvard. For Malcolm (Shameik Moore), a serious nerd and 90s hip-hop junky who happens to live in a rough LA hood, this is the fine line he must toe, and toe he does.

It’s precisely where the dangerous meets the cool that writer/director Rick Famuyiwa (Talk to Me, Brown Sugar) finds a tangible thrill. There’s a rhythm and a pulse that drives his characters with refreshing purpose, so it’s really no surprise that his vision started with the simple turn of the radio.

Famuyiwa recalls, “This was sort of inspired by the idea of what it is to be different. A black geek, or whatever you want to call it, doesn’t really fit in. I was listening to a lot of interesting things musically—Kendrick Lamar, A$AP Rocky, Odd Future—and there’s this new voice that was coming from a lot of these MCs that were growing up in similar places that I did, but that they had a completely different point of view, because they’re coming from a generation that’s entirely connected by social media and everything else. So it just got me thinking about the voice of that generation but filtered through my familiar, which was Inglewood.”

That kinship to his own upbringing fueled by the energy of today’s vim and vigor manifests when Malcolm and his friends find themselves in possession of copious amounts of drugs, unfortunately close to the time when their character would be scrutinized by college review boards. After fighting their whole high school careers to keep the cliché of being inner-city kids of color as far from their transcripts as possible, Malcolm’s crew will do anything to get this dope good and gone.

This is when Famuyiwa injects a subtle profundity in Dope’s core, meant to suggest a change in the framework with which we view race, gender, and socio-economic issues. But it had to be done right. According to Kiersey Clemons (“Transparent”) who plays Malcolm’s gay best friend Diggy, it was important for all of them to impart rather than enforce opinion.

“[Famuyiwa] doesn’t to try make everyone else feel the way he feels. He gives his view on a lot of things. He shows how the boys feel about [Diggy] being gay. She gives her view about how she feels being gay. It’s the same way with Blake Anderson who plays Will—he gives his view on the N word. And then you get all our view on the N word. So you get all of these views, and it makes you feel like you’re not being forced to agree with them. You have the option to choose what stance you want to take, and I think he did a really great job as a writer about making your own choices, and not necessarily making you believe something that he does.”

Indeed, Famuyiwa saw it simply as fact that could either be ignored or embraced, and harmonizing the rather raucously fun energy of the fictional storyline with the gravity of the subtext was merely a natural process.

“I did have a very specific point of view, but I felt that the humor or anything that would come from it actually comes from a matter-of-fact basis. If you have a problem with the aspects of the message, or the kids, or their language then you have a problem with the facts of many kids’ existences. That was really how I balanced it, and it was really treated like any other thing, and it would eventually lead to the comedy and character,” says Famuyiwa.

That pragmatic notion of storytelling can really be felt in the spirit of Diggy. On paper, most would think of her as the epitome of a marginalized minority, but for Clemons, it was to act as anything but that would bring truth to the character.

Style, swag, panache—call it want you want, but Famuyiwa seems to have an uncanny ability to engage his characters like Diggy, his setting, and everything in between with a spirit indicative of our experience as people of today, while embracing the soul of nostalgia for an era long gone. And this was no mistake.

“My idea for [Dope] was to tell a story that felt relevant for a generation that’s grown up totally immersed in technology, immersed in the ability to communicate with others at all times, but also feeling like it was rooted in the films I enjoyed growing up and loved as a kid. They were films by John Hughes: Ferris Bueller, The Breakfast Club. There were films from film school like Pulp Fiction, Boogie Nights, and Menace II Society. I just felt that I hadn’t seen films like that in awhile. I wanted Dope to have that same sort of energy and style as those but to be firmly planted in today.”