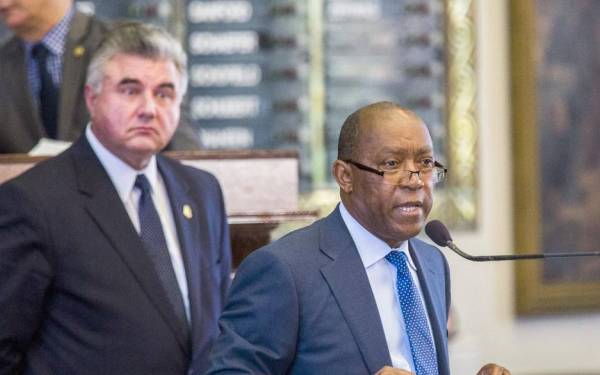 AUSTIN — Campus carry is now all but certain to become law in Texas, as Republican lawmakers worked to the final gun this year to hit the last major target set out for them by gun rights advocates.

The House on Sunday voted 98-47, over Democratic objections, to give final approval to a watered-down proposal to let licensed Texans carry concealed handguns in most state university buildings. The Senate on Saturday did the same on a 20-11 party-line vote.

The bill now heads to Gov. Greg Abbott, a Republican who’s likely to sign it. He’s already said he will approve the other high-profile firearms measure sent to his desk: a bill to allow licensed Texans to openly carry handguns in hip or shoulder holsters.

Rep. Allen Fletcher, campus carry’s sponsor, said Sunday that the loud concerns this year over the measure have been “much ado about nothing.”

“This bill will do nothing more than protect the men and women who are carrying concealed on our campuses,” said the Republican from Tomball.

But just as they did with open carry, pro-gun lawmakers had to back down on some provisions favored by tea party Republicans.

Under a compromise pushed by the House, public university presidents could establish gun-free zones on campus. Though some campus carry backers said their intent is for those zones to be quite limited, the bill appears to offer schools the opportunity to maximize that loophole.

And Rep. Trey Martinez Fischer, D-San Antonio, argued that state schools would have wide latitude to create a “patchwork of policies that fit the uniqueness of the campus.”

“I don’t believe this fight is over,” said Martinez Fischer, who helped craft the campus carry compromise, even though he voted against the bill. “This fight is just beginning.”

University of Texas System Chancellor William McRaven, a retired Navy admiral, said in a written statement that while the result was “not what we had hoped for,” the recent changes to the bill were helpful.

“I pledge to our students, faculty, staff, patients and their families ... that, as UT System leaders, we will do everything in our power to maintain safe and secure campuses.”

Existing state law lets the 841,500 Texans with concealed handgun licenses carry their firearms onto university grounds. The new legislation aims to allow those Texans to take their handguns into dorms, classrooms, cafeterias and other public campus buildings.

Texans, save for veterans and those in the military, must be 21 years old to get such a license. A Dallas Morning News analysis found that, in part because of that age restriction, only a small fraction of college students would be eligible for campus carry.

The proposal would go into effect for four-year universities in fall 2016; junior colleges would get an extra year to prepare.

At the urging of Sen. Brian Birdwell, campus carry’s author, private universities would have the ability to totally opt out of the bill’s provisions. The Granbury Republican said he wanted to respect private property rights.

Guns would also still be barred in hospitals and bars, even if on public campuses. All colleges and universities could still ban guns at sporting events and set rules on how firearms are stored in dormitories.

And to allay the concerns of campus carry opponents — who cast the idea as dangerous — House and Senate negotiators agreed to give public university presidents the ability to declare parts of campus, but not all of it, off-limits to guns.

Those schools’ boards of regents could then vote to amend the gun-free zones. Schools would also have to submit explanations for why they made their decisions to lawmakers, who would likely have to take additional legislative action if they wanted to rein in schools.

Even with that setup, at least one Democrat said he feared that schools would be reluctant to test the bill’s limits.

“Many of these college presidents are going to be reluctant to put too many restrictions on their college campuses because … we may not give them the funds that they need,” said Rep. Sylvester Turner, D-Houston.