How love trumps loss in Testament of Youth 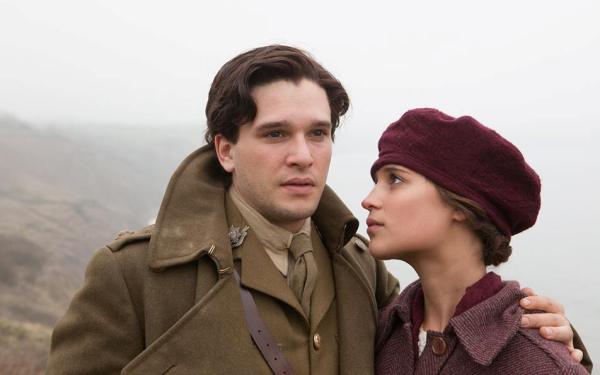 When Vera Brittain sent her brother, her best friend, and her lover off to war, there was little indication of the darkness she would face before Armistice Day came. Before it was dubbed World War I, the prospect of battle seemed brief and rather inconsequential. Of course, we now know the tragedy that WWI inevitably brought, but if you asked Ms. Brittain, you would understand that tragedy is just the beginning of a much more complicated journey.

So, when longtime TV director James Kent (“The Thirteenth Tale,” “Margaret”) got his hands on Brittain’s memoirs, A Testament of Youth, a fully expounded account of a young girl redefined by the bouts of war, his love for history and for women fighting for a place within it made it a clear choice to adapt for his first feature film.

Kent explains, “I think [women] are out there with their emotions and they are often kicking against history, trying to get their voice heard, and you know that’s great drama. The outsider trying to make their voice heard. So that spoke to me a lot.”

Brittain, played by the delicately resilient Alicia Vikander (Ex Machina) certainly did kick, and it looks like history succumbed to her indomitable spirit, a spirit that won her a coveted spot at Oxford in the writing program, despite her parents wishes, and which also won the affection of a young man named Roland.

For Kit Harington (“Game of Thrones”) engaging with his character Roland was a unique challenge. Despite winning Brittain’s heart and being the center of her pining, Roland wasn’t exactly always an agreeable young man, which is a tough trait for a romantic lead to own.

“It was a delicate dance to play Roland, because he has to be arrogant, and full of himself. In real life, he was top of his class, he was the guy at the school, and was headed for great things. He has to be really self-assured, but you have to like him. I was worried about that. I kept on pushing more serious, and James was like no, he has to be light otherwise we won’t like him. He was right on that front, and I think we found it in the end,” recalls Harington.

It makes sense then that Brittain would also be predisposed to rather stalwart behavior. When they first meet, Roland’s brazenness is unappealing to Brittain’s unwavering sense of independence. As it turns out Harington faced a similar stubbornness in Vikander, a challenge that he found to be exhilarating.

Harington recalls, “Having a scene with Alicia is almost a bit like doing battle, but in the best possible way. She’s so fierce and so determined, and knows precisely and exactly what she wants from a scene. You have to battle her to get what you want. She’s not ungenerous, but it’s like she’s very, very clear, and I found that exciting to work off of. It works for Vera as well. She’d say, ‘You can’t just do that,’ and you just say, ‘Well I’m gonna try.’”

As a director, Kent found something different in Vikander’s clarity of acting. Because much of Vera’s experience is emoted from within rather than expressed without, Kent needed someone who could fill the scope of the lens with a quiet magnitude.

“[Vikander] can hold a shot with no dialogue, which is great for me, because I suppose I’m a bit of an old sentimentalist, and I like to look at women’s faces and allow them to project a feeling. She is nothing but brilliant at that. It’s all seeping through her pores and her eyes. It doesn’t need a lot of words,” Kent explains.

In many of those moments of pronounced silence, Brittain’s endurance of loss becomes familiarized by nods to classic films that embodied similar tones of tragedy. From Brief Encounter to Casablanca, Kent saw moments of binding likeness that he felt was necessary to embrace in order to fully express the gravity of war.

“I have unashamedly acknowledged my debt to Gone with the Wind. It felt important that there was one moment the audience get a sense of scale of loss, because unless you have one moment, you can’t really understand Vera’s anger when she returns home,” Kent says. “I mean, this is really just a drop in the ocean, what was showed. That field would’ve gone on for fields and fields.”

What’s truly extraordinary, however, is how Kent approached his set when filming these momentous scenes. In any instance where a feeling of urgency needed to be fully engaged in, especially by large groups of extras, he would simply turn on the radio to something rather unexpected.

“He played hard house music, which was f*****g hilarious, because I thought, when he told me that he would be playing music, and told me to roll with it, I was expecting Wagner or some kind of sweeping romantic music, and then this hard house trance music came on. I think I laughed through the whole first take. But it was really useful. It upped the energy and the urgency of that scene,” says Harington.

House music or not, its clear that Kent’s vision in portraying a young love torn by aggressions of war is deep and honest to Brittain’s account, one that is unique, yet wholly relatable to anyone who found themselves victims of loss. And still, we watch as a young girl with no reason to forgive suddenly grow into a leader of peace.

Kent explains, “What’s wonderful about Vera’s view on pacifism, she sort of personalizes it down to one person. You cannot believe the scale of her loss, and you have to keep reminding yourself that this actually happened, which helps, because otherwise it would be so melodramatic. I think that makes it come home to you. This is what its like to be one person. That’s all she could do, is write this one book about loving these three young men.”

Testament of Youth opens at ArcLight Hollywood and The Landmark in L.A. and at Angelika Film Center and The Paris Theater in New York on Friday, June 5th.