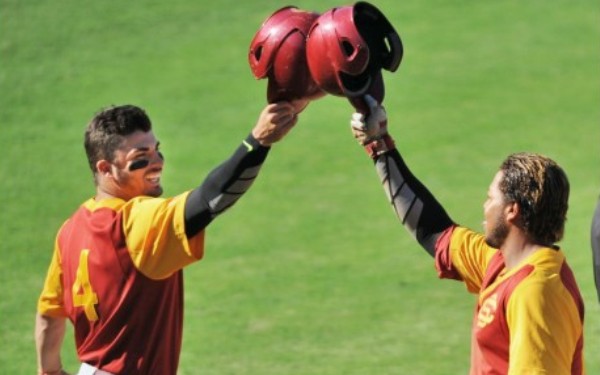 LAKE ELSINORE >> USC experienced a stunning victory followed by a devastating defeat at 1:18 a.m. Monday morning as the Trojans’ season ended with a 14-10 loss to Virginia in the NCAA Tournament at the Diamond Stadium.

The Trojans blew a 9-5 lead against the Cavaliers, marring a come-from-behind 12-11 victory over San Diego State earlier Sunday. USC played more than nine hours of baseball and looked drained by the end of the games.

Star catcher Garrett Stubbs caught all 20 innings and hit .563 in the regional.

“We set out at the beginning of the year to make a mark,” Stubbs said. “It just showed the kind of players we had. They never quit.”

After defeating San Diego State, the Trojans got an hour to regroup and face Virginia.

“It probably helped us because we had a lot more adrenaline in that game,” Stubbs said.

It looked like the game might not end early as Virginia jumped to a 4-0 lead in the first inning, but the Trojans quickly erased the deficit in their half of the inning and held a 5-4 advantage. The big blows were a two-run double by Jeremy Martinez and two-run triple by Dante Flores.

Cavaliers starting pitcher Alec Bettinger did not record a single out. The first inning took 40 minutes, which was a lot of baseball for the Trojans after their first game lasted 4 hours and 25 minutes.

USC came back and took a 9-5 lead, but then the Trojans’ pitching faltered. After Brooks Kriske left with a groin injury, Jeff Paschke gave up two runs and Brent Wheatley five. That gave the Cavaliers (37-22) a lead they never relinquished.

“We probably ran out of steam on the mound,” USC coach Dan Hubbs said. “(The team) wanted to get back to being relevant, and I think they’ve done that.”

The Trojans stormed the field earlier in the evening following a dramatic victory over San Diego State. USC was down to its final out and trailed 11-10 when Martinez doubled to drive in two runs and give the Trojans the lead.

USC (39-21) trailed 11-7 entering the eighth inning, but Martinez drove in two runs to cut the deficit to 11-9. Star catcher Garrett Stubbs drove in a run in the ninth to set up Martinez’s game-winning hit. Reliever Tyler Gilbert saved his second straight game with 2 1/3 scoreless innings.

“If that doesn’t get you to love college baseball, I don’t know what will,” he said. “They kept coming at us and coming at us, and we would have to answer and come at them.

“It just seemed like you didn’t know who was going to throw the last punch. And fortunately it was us that did. Tyler Gilbert did a hell of a job in finishing that game off.