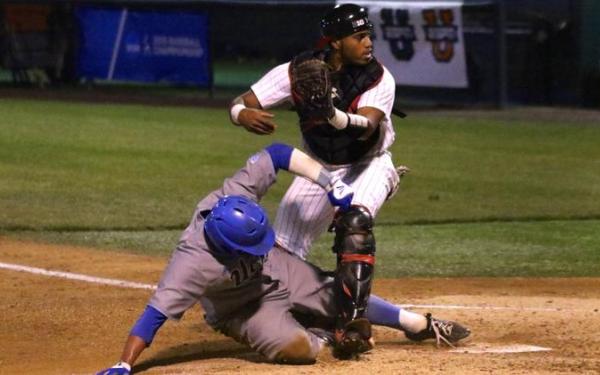 Maryland catcher Kevin Martir shows the umpire the ball after tagging UCLA's Darrell Miller Jr. on a play at the plate in the Los Angeles Regional championship game.
(Credit: latimes.com)

Getting through an NCAA tournament regional can be a lesson in baseball economics. Pitching is the gold standard.

UCLA and Maryland were locked in a struggle of attrition during a weekend that extended into Monday night in the Los Angeles Regional. Both got more than they could hope for from their pitching staffs.

Maryland got a little more in a 2-1 victory at Jackie Robinson Stadium.

Bloom, making his fifth start, threw six shutout innings, allowing one hit and one unearned run. Kevin Mooney went the last three, striking out Darrell Miller Jr. with runners on first and third in the ninth to start the Terrapins' celebration.

Maryland (42-22) had only three NCAA tournament appearances until last season. This is the second consecutive year the Terrapins have reached the super regional.

They face Virginia this weekend.

For the Bruins (45-16), it was a disappointing finish. They entered as the No. 1-seeded team in the tournament overall, but lost two of three games to Maryland.

This was the fifth game in four days for the Bruins and the fourth for the Terrapins. Wear and tear on the pitching staffs was a given.

"I told Taylor, his start was as good as good can be pitching against the No. 1 team at their place," Maryland Coach John Szefc said.

Bloom was tabbed as the Terrapins looked for someone to chew up a few innings in a tag-team pitching plan.

He chewed up so many that Maryland needed only to tap Mooney, the team's closer, who picked up his 11th save.

Both teams were looking to be creative with pitching, something that can be difficult in a long regional.

Said UCLA Coach John Savage before the game, "We like to establish roles, seventh-inning guy, eighth-inning guy, closer, long reliever. It's vital to have depth in case you get into a situation where you're playing five games in four days."

The Bruins and Terrapins were down to that Monday.

UCLA got a good effort from Grant Dyer, who was making his first start of the season.

He gave up one run in four innings, allowing only a run-scoring double by Anthony Papio in the fourth for a 1-0 lead.

The Terrapins went up 2-0 on a walk, single and groundout in the sixth.

Bloom received help in the second when center fielder LaMonte Wade threw out Miller at the plate.

But mostly, the Bruins were baffled by Bloom, who allowed only six balls hit out of the infield.