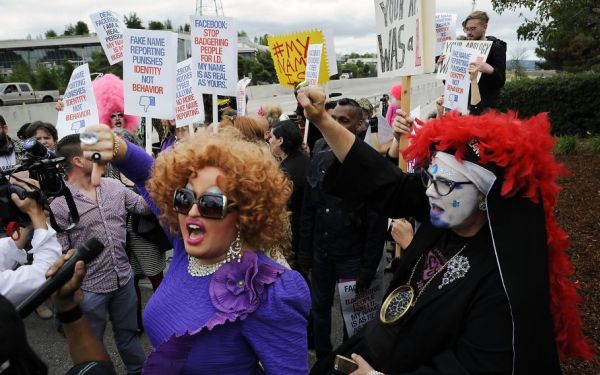 Little Miss Hot Mess, left, and Sister Merry Peter yell as they join other members of the #MyNameIs Coalition in protest Facebook's so-called "fake name policy" in front of their headquarters.
(Credit: Michael Short, Special To The Chronicle)

A coalition of drag queens, Native Americans, domestic violence survivors and others who have been locked out of their Facebook account for using a “fake” name protested a policy they describe as discriminatory at the social network’s Menlo Park headquarters Monday.

Over the past year, Facebook has been under fire for its “real names” policy, which requires that users register under a name the site deems “authentic.” Facing backlash, the social network offered an apology in October to a group of drag queens who had protested the requirement. The company also issued a policy shift allowing users to go by any version of their “authentic” self, so long as they provided two forms of documentation with that name.

That tweak, apparently, was not enough.

Under the modified policy, plenty of users are still getting locked out, protesters said.

“Facebook apologized to us and said they would make major policy changes,” said the San Francisco drag queen Lil Miss Hot Mess. “But users still have the option to flag someone’s name for being fake, which encourages discrimination, bullying and malicious behavior for simply exercising our right to self-identify.”

Facebook relies on users to flag any name that sounds like it might be fake. Those whose names have been called into question must then either change their name or submit verification that their name is indeed real, such as a legal ID. Often users with uncommon names or those who prefer to go by something other than their legal name get caught in the cull.

The #MyNameIs coalition argues that Facebook’s policy of allowing other users to report fake names is discriminatory and unnecessary since the service already offers other channels to report offenses such as suspicious activity or impersonating another user.

The group said it has received thousands of reports from blocked users, including many who say their accounts were blocked by cyberbullies.

Facebook has continually maintained that barring anonymity promotes safety and protects users from the kinds of online abuse abundant on anonymous social networks. In fact, the use of legal names gave Facebook a novel edge in the early days of social networks.

“The authentic name requirement has defined and distinguished our service from its earliest days,” the post read. “We firmly believe in and are committed to our authentic name policy, and ask that everyone on Facebook use their authentic name on their profile.”

The company said it has made “significant improvements” in responding to concerns, such as expanding the types of documents people can use to verify their identity and providing users access to their accounts after they have been flagged, rather than immediately locking them out.

“Facebook is out of touch with the majority of its users,” Lil Miss Hot Mess said. “This policy is dangerous, and it is discriminatory.”